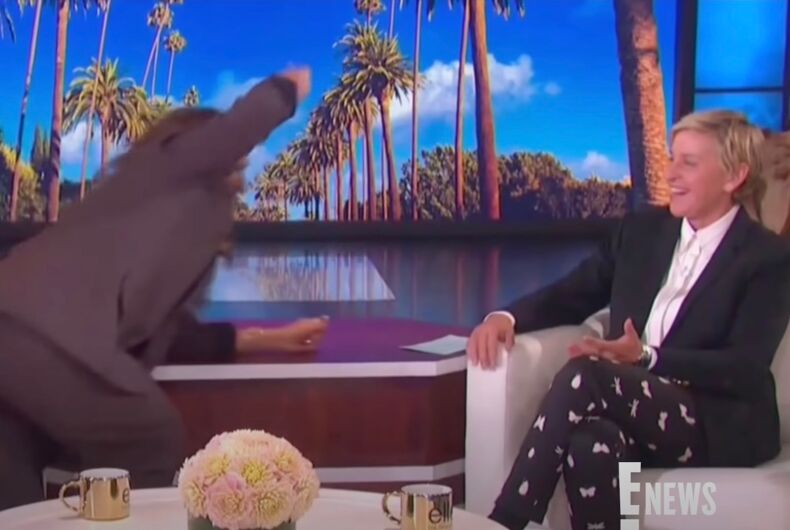 On the Ellen DeGeneres Show this week, things got a bit heated between DeGeneres and actress Leah Remini.

A clip from Tuesday’s episode reveals a slightly awkward exchange between the talk show host and the former King of Queens star. While talking about the pranks she pulls on her daughter, Remini suddenly becomes scared that Ellen is about to pull one of her signature pranks and startle her.

Related: JoJo Siwa & Jenna Johnson tango their way to the top of Dancing with the Stars

In the middle of her story, Remini looks over both of her shoulders to make sure no one is behind her before telling DeGeneres, “You’re acting really interested so I don’t know if you’re doing that thing where you’re into my story.”

Remini then stands up from her chair, leans over, and playfully slaps Ellen on the arm three times.

After sitting down, Remini emphasizes she’s all fun and games. “I love you, I miss you, and I’m so happy to be here in your last season,” she says.

Remini later posted about her appearance on Instagram to underscore the playful nature of the conversation, writing, “Nothing but love despite my ‘made face’ with one of my favorite people!”

It seems like Remini and DeGeneres have have been up to these antics for quite some time. A video of Remini’s appearance on Ellen’s show nine years ago showed the two of them play-fighting.

In the older video, DeGeneres presents the tongue-in-cheek “first ever mid-lifetime achievement award” to Remini.

When the music instantly begins to play, preventing Remini from making a speech, DeGeneres tries to remove Remini from the lectern. As part of the bit, the two of them then begin to “wrestle” until they have both tackled one another to the floor.