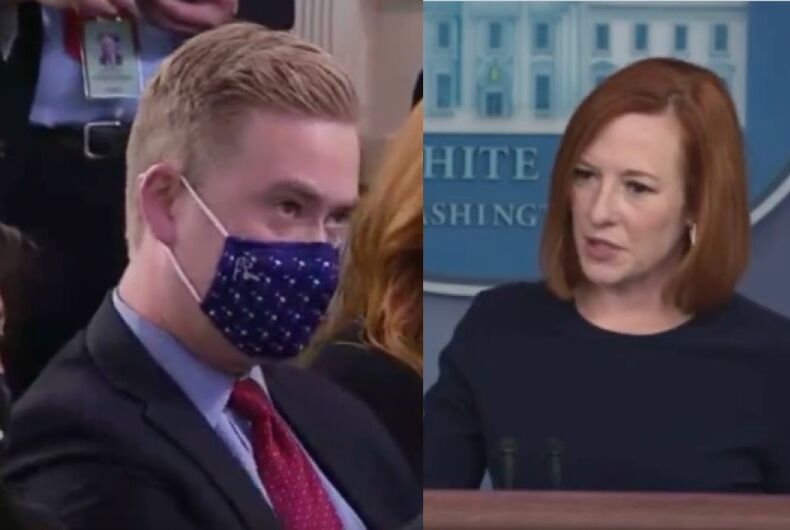 The quick-witted official has made humiliating Doocy into a sport followed closely by the internet. But this time, she made it hurt.

“Well, since you gave me the opportunity here…” Psaki started after Doocy insinuated that Biden was wielding the Department of Justice (DOJ) for his own personal whims like Trump did.

“Former president Trump used his office to incite an insurrection. He put political pressure on senior DOJ officials to propagate lies about the election to the point that they threatened to resign en masse.

“I think there’s hardly a comparison.”

Psaki’s constant takedowns of Fox News reporter Peter Doocy tickle the internet every time and has launched the hashtag #PsakiBomb. Every day he tries to ask a “gotcha” question – and every day he comes up empty-handed and ends up looking like an idiot.

Psaki calling bullshit on Doocy is the perpetual Play Of The Day on Twitter.

She needs to start charging him.

Why is it when Psaki dishes out humble pie, Doocy keeps coming back for seconds and thirds…?😮

She wears Doocy's tiny shrivelled balls in a locket

Doocy is the dumbest straight man in a comedy duo EVER! @FoxNews https://t.co/FsS50U3sW3

I love this woman.