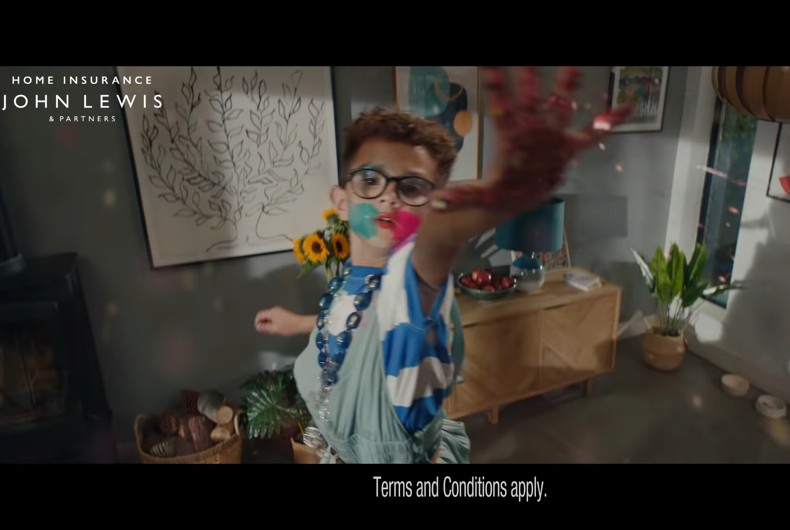 A heartwarming commercial featuring a young boy wearing makeup, jewelry, heels, and a dress is taking the Internet by storm.

The boy is featured in a British ad for John Lewis Home Insurance. In it, he is strutting through his house, causing damage left and right while dancing fabulously to Stevie Nicks’ “Edge of Seventeen.”

As he struts past his family and continues to smear paint and glitter across his face, he spills drinks, breaks glassware, knocks into paintings, and pours paint all over the carpet.

But it’s all in the name of his fabulous dance number.  In the end, the commercial reads, “Let Life Happen.”

“We wanted to inject joy, freedom and humor into this campaign,” said Claire Pointon, customer director for John Lewis, in a statement.

“The story we landed on fulfills this, with the idea that when you have John Lewis’ Home Insurance with the option of accidental damage cover, you don’t need to worry anymore, you can just ‘let life happen.'”

Many have celebrated the playful ad, including Stevie Nicks, herself, who posted the ad to Twitter and said, “Love this!”

Life’s too short to get upset over this amazing advert!
We all need more glitter in our lives.
Let life happen.
💙💚🤎🤍💛🖤💜❤️

Well done @JohnLewisRetail👏🏻. The ad is facing lots of criticism for showing a kid in a dress & make up. JL are not pandering to the “woke” they’re advertising home insurance whilst normalising kids imagination/expression. There is bigger problems in the 🌎 than a kid in a frock.

But the backlash has been strong. Many on Twitter claim to be fine with the boy’s gender expression but say the ad is perpetuating the idea that it’s okay for children to act spoiled and do whatever they want to their homes.

“Couldn’t care less if the boy is wearing a dress,” one user wrote. “He’s a brat. Let life happen? Let my kid trash my house? No, my kid is going to show some respect to his home and family. There’s playing and then they’re being a brat.”

Others have accused the company of false advertising, saying that home insurance doesn’t typically cover the type of damage the boy caused.

And of course, there have been plenty of actively transphobic language used as well.

The new #johnlewis home insurance ad makes me cringe every time I see it, it is disgraceful to be pushing a trans agenda using a young boy.

The backlash was strong enough that John Lewis issued a statement on Thursday emphasizing that the ad was supposed to be fun.

“At John Lewis, we believe in children having fun and that’s why we chose this playful storyline for our latest advert,” it said. “It’s designed to show the young actor getting carried away with his dramatic performance. He is not willfully damaging his home and is unaware of the unintentional consequences of his actions.”

The statement went on to confirm that those with the company’s Accidental Damage Coverage would indeed be covered by the type of damage the child caused.

Many of you have contacted us regarding the thinking behind our latest Home Insurance advert. Please find our response below: pic.twitter.com/lbTqFTSry2

Rev. Dawn Bennett runs a religious safe space and is an LGBTQ Nation Hometown Hero of 2021