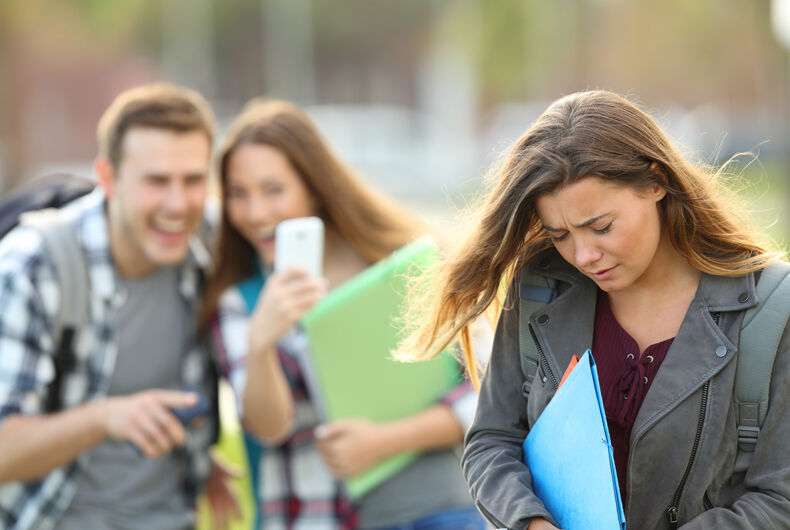 These findings are part of the third annual survey on bullying recently released by the queer youth suicide prevention organization, The Trevor Project.

The survey found that 52 percent of LGBTQ middle and high school students had been bullied over the last year. Native and Indigenous students as well as transgender and non-binary students experienced the highest levels of bullying. The survey also found that bullied LGBTQ students were three times more likely to attempt suicide than students who weren’t bullied.

Anti-bullying experts told The 19th that schools could do more to address the issue.

In addition to enforcing policies that explicitly list zero tolerance of bullying based on race, sexual orientation, gender identity, and other characteristics, experts recommended that schools should form student-led Gay-Straight Alliances (GSAs) and allow the display of other affirming signals that remind LGBTQ students that their schools welcome and embrace LGBTQ students.

If left unaddressed, some students may self-harm, drop out or develop symptoms of trauma that will wreck their emotional health, self-esteem, and personal and work relationships in the future. This can lead to drug addiction, depression, or other harmful behaviors later on.

“It’s not like we’re helpless,” said Ryan Watson, an associate professor at the University of Connecticut who researched the experiences and health risks facing LGBTQ teenagers. “We have quite a few strategies we can pull from … yet, schools are still resistant.”

A 2019 study from the Gay, Lesbian and Straight Education Network (GLSEN) found that only 13 percent of students attended schools with explicit anti-bullying policies. Meanwhile, other schools are banning Pride flags in classrooms because some conservative students and parents see them as “divisive.”

“Removing the flag is different than never raising it. … It is a clear expression of lack of support,” Diego Sanchez, director of advocacy at PFLAG National, said.

To really address bullying, society must face the deeper issue: the fact that non-heterosexual and non-binary people are treated as objects worthy of hatred. Doing that will require advocates to more forcefully oppose the anti-LGBTQ laws and hate speech that creates bullies in the first place.

Rev. Dawn Bennett runs a religious safe space and is an LGBTQ Nation Hometown Hero of 2021