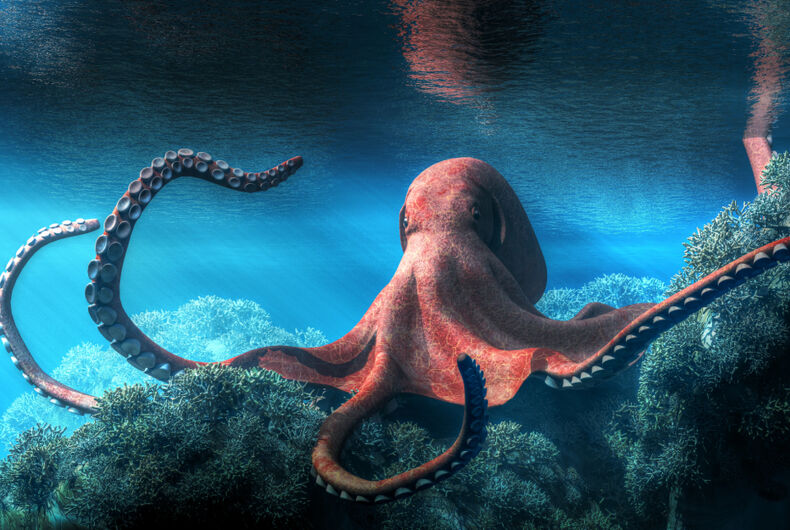 A Republican lawmaker in New Hampshire is being denounced by his own party’s leaders for his bizarre claims about the COVID-19 vaccines, which included that the vaccines contain “living organism(s) with tentacles.” And he’s currently blocking millions of dollars in federal COVID-19 aid while he embarrasses the state GOP.

State Rep. Kenneth Weyler (R) emailed a 52-page “report” to his colleagues about COVID-19 and the vaccines with numerous ridiculous claims, including that the pandemic was a plot developed by leaders in the Vatican, London, and D.C. to control people’s thoughts with 5G technology.

“It’s all one huge puppet theatre, where the majority of the people — even most of those who are complicit — haven’t got the slightest clue what is going on, and how everyone is being played,” his report says.

Weyler’s report also says that “the babies of vaccinated parents are born with pitch black eyes and can stand and even walk at only three months old,” according to his colleague state Rep. Mary Jane Wallner (D), who received the email.

The report called the Catholic Church a “criminal network” that is “highly spiritual in nature, and all who are at the top are involved in dark ancient spiritual practices,” calling the church’s leaders “satanists” and “luciferians.”

Now the state’s Republican governor has called for Weyler to be removed from his leadership position on the state’s House Fiscal Committee.

“I have repeatedly expressed directly to Speaker [Sherm] Packard about the need to remove Weyler from this position of leadership,” Gov. Chris Sununu (R) said in a statement. “These latest absurd emails have accelerated the urgency that the Speaker needs to take action.”

Republican state House Speaker Packard is standing by Weyler, though, saying that Weyler merely wanted to “share constituent information,” as if the report about organisms with tentacles in the vaccines will provide lawmakers with useful information.

Weyler has been making increasingly troubling statements about the virus and vaccines as he works to block $27 million in federal vaccine aid for his state. The state’s House Fiscal Committee voted to table a bill to receive that money.

In a tense hearing, Weyler accused New Hampshire Health and Human Services Commissioner Lori Shibinette of lying when she said that almost all COVID-19 hospitalizations in the state are of unvaccinated people. Weyler claimed that it was the opposite, that it’s almost exclusively vaccinated people who are being hospitalized. He did not cite a source for the outlandish claim.

He later told NPR that he doesn’t think the COVID-19 vaccines work and that Shibenette “is just listening to the CDC… I don’t consider the CDC a credible source.”

“They want everybody to get the shot. Why? Are they getting paid off by Big Pharma?” Weyler said. “Is there something in the shot that’s going to help them control us? There’s lots of things I’m reading that make me very suspicious.”

He also wrote on his Facebook page that doctors are under “pressure from above to misreport” adverse side effects of the COVID-19 vaccines, although he did not say who was applying this pressure.

“The continued dissemination of disinformation on COVID from Rep. Weyler is a danger to public health in New Hampshire and to the credibility of the legislature as a whole,” Wallner said in a statement.

Jo MaMa has changed Chicago forever. They know you can change your world for the better, too.