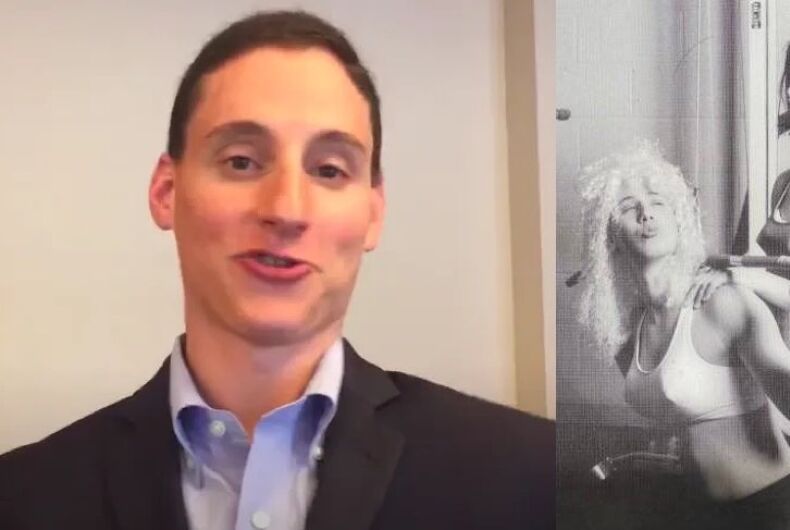 Ohio Republican Josh Mandel may not like transgender women, but he's got no problem doing drag.Photo: Composite

This time around, he decided to demean trans women with a slur while touting Dave Chappelle’s controversial comedy special for Netflix and the subsequent fallout.

“Just watched the Chappelle special,” he tweeted. “Was hilarious and offensive to all — as comedy should be. Lighten up transies [sic] — Chappelle is the GOAT.”

Was hilarious and offensive to all — as comedy should be.

The internet being what it is, the responses to his tweet were sharp, but user Robert Schmad took it a step further.

“Trans icon Josh Mandel,” he tweeted in response along with a photo of Mandel in drag wearing a stuffed sports bra and a wig.

The homophobic candidate is pictured giving another student a backrub in the weight room. The photo comes from Mandel’s high school yearbook.

Our sister site, Queerty, reports that the photo first surfaced in 2012 “when Mandel was Ohio’s state treasurer and a GOP candidate for the U.S. Senate. At the time, his communications director said the candidate had no recollection of taking the photo, but that he was probably just ‘joking around’.”

Earlier this month, Mandel – who was once denounced by his own family for rejecting his lesbian, veteran cousin – was kicked out of a school board meeting by sheriff’s officers on Monday when he took to the mic to rant about transgender kids in schools… in a school district he doesn’t even live in.

The only reason Nazi Josh would ever watch Dave Chappelle, is if Chappelle was attacking blacks, Muslims, immigrants, or the LGBTQ communities. Nobody normal calls them transies. But, Josh ain’t normal.

Hilarious and Offensive to all.
Sums up the GOP as well.

Speaking of "transies…"
Sometimes those who scream the loudest also have the most to hide.
(Josh is the girl in the back…Beachwood HS yearbook) pic.twitter.com/9bZ56DYFuu

Support for anti-trans laws has increased. But trans people can reverse this by coming out.