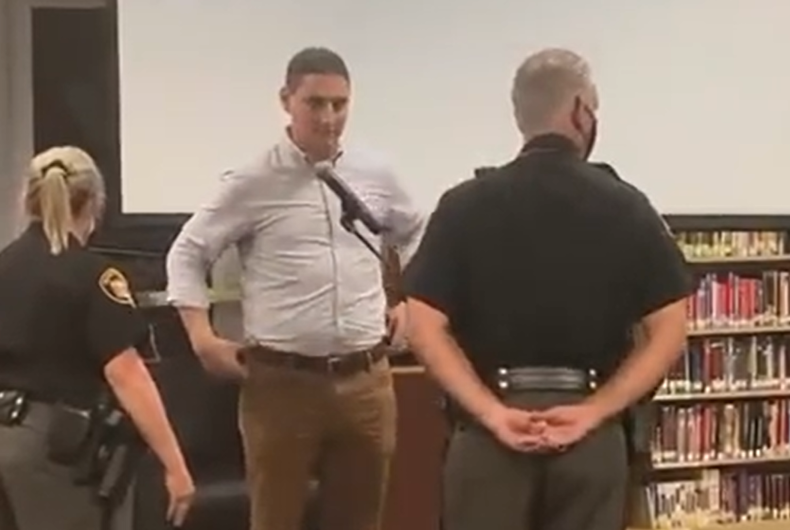 Senate candidate and former Ohio Treasurer Josh Mandel – who was once denounced by his own family for rejecting his lesbian, veteran cousin – was kicked out of a school board meeting by sheriff’s officers on Monday when he took to the mic to rant about transgender kids in schools… in a school district he doesn’t even live in.

Mandel was asked to speak by Lakota Local School District board candidate Darbi Boddy. When he began, the board members told him to stop because he wasn’t a resident or district staff member.

Mandel kept speaking anyway, so the board called a recess, which stopped the meeting from officially being recorded. Attendees, however, kept their cameras rolling as Mandel remained in place at the microphone and declared that the school is “using kids as pawns in a political game” by requiring students to wear masks.

He then took aim at transgender children in the nearly empty room: “On top of that, children should not be forced to learn about whether they pick a gender or not pick a gender. Boys are boys. Girls are girls.”

As officers attempted to escort him out, he doubled down on the board’s rules, which state participants in public hearings don’t have to be resident if they are designated by a resident to speak. Board President Kelley Casper argued that while those rules are true, Boddy did not designate a speaker on her behalf but rather had stated she wanted to “yield her time.”

The board’s laws also state that officers can remove “a disorderly person when that person’s conduct interferes with the orderly progress of the meeting,” according to the Cincinnati Enquirer.

Mandel, who describes himself in his Twitter bio as the “1st Statewide Official in Ohio to support President Trump,” has since posted multiple times on Twitter about the incident, claiming the board violated his right to free speech.

“I just got escorted out of the Lakota School Board meeting for speaking out against mask mandates,” he wrote. “Thanks to the moms who invited me to speak. We are still in charge of our kids–even if Biden tries to call us ‘Domestic Terrorists.”‘

I just got escorted out of the Lakota School Board meeting for speaking out against mask mandates.

Thanks to the moms who invited me to speak.

We are still in charge of our kids — even if Biden tries to call us “Domestic Terrorists”. pic.twitter.com/XXGisR89Hp

The following day, he tweeted again, this time adding video of his anti-trans and anti-mask statements

“Why are school boards afraid of parents standing up for kids?” he wrote. “Thanks to this courageous mom for recording Lakota School Board’s crack down on my free speech at a public meeting. This isn’t over.”

Why are school boards afraid of parents standing up for kids?

Thanks to this courageous mom for recording Lakota School Board’s crack down on my free speech at a public meeting.

Mandel is a Trump-style Republican full of bluster and far-right talking points littered with a fine dusting of racism and homophobia.

In 2012, his own family wrote an op-ed denouncing him for rejecting his lesbian veteran cousin. He vocally and repeatedly denounced same-sex marriage and allowing LGBTQ people to serve in the military.

Mandel is the leading Republican in a crowded primary race that features the former head of the state party and a novelist as other potential candidates.

As part of his campaign, he has launched an all-out attack on the transgender and non-binary community.

“I just saw they/them in someone’s bio. What in the world does that mean?” Mandel tweeted on July 21.

I just saw they/them in someone’s bio. What in the world does that mean?

There are only 2 genders. Science.

The next day came a meme with a Bible verse with “Male and Female. That is all.”

The Dutch princess can marry another woman & still become Queen