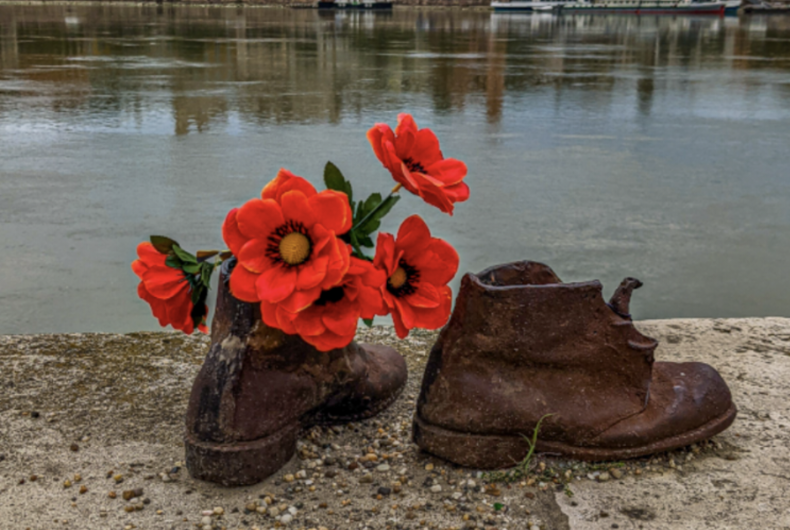 A workman's boots are part of the Shoes on the Danube Bank.Photo: Michael Jensen

Before me was a striking sculpture: sixty pairs of iron shoes along the bank of the Danube River in Budapest, Hungary.

Officially known as Shoes on the Danube Bank, this is a memorial to the murder of thousands of Jews by the fascist Arrow Cross Party during the winter of 1944/45. I’d read a lot about it, and it had been on my “must-see” list of things to see in the city.

Related: What is queer theory & why is it important?

And by “must-see,” I mean “must-photograph.”

I knelt on the concrete ground, intent on getting the perfect picture. Who cares if it hurt my knees? I was especially pleased the day was grey and chilly, adding an extra air of somberness to a very somber piece of art.

I focused on one pair of workman’s boots.

Someone had decorated the sculpted shoes with a bouquet of bright red flowers. I wanted to capture the contrast between the flowers, the rusted shoes, and the dreary-looking Danube in the background.

This is good, I thought. I bet this will get a lot of likes on Instagram, especially with a poignant caption.

I kept clicking away, determined to keep going until I knew I had “the shot.”

But suddenly I felt uneasy, my subconscious pricking at me.

Is this wrong? I suddenly wondered. I had come to a spot where men, women, and children had been murdered, and I was thinking about getting the perfect photo.

But lots of people took photos here. I’d seen them all over social media.

Wasn’t the point of the memorial so that people would never forget what had been done to Jews during WWII? Didn’t sharing photos and telling the story help do exactly that? And to keep it from happening again. That seemed especially important in Hungary, where Viktor Orban’s government had just passed an incredibly homophobic piece of legislation.

Maybe, I thought. But that isn’t why I’m here.I decided to leave. And to not share these pictures.

Then I heard a voice behind me. “Excuse me?”

I turned. It was a young, dark-haired woman — the only other person in the area.

“May I ask a question?” she asked. Her English was perfect, only a slight Italian accent giving away her nationality.

She nodded to the iron shoes. “What is all of this?”

“It’s called Shoes on the Danube Bank,” I said. “It’s a memorial to what happened here in the 1940s after the fascist Arrow Cross Party came to power. They routinely lined up Jews along the river and shot them. Men, women, children — thousands of them. And since shoes were so valuable during the war, they often made the Jews remove theirs first.”

The young woman’s eyes widened. She even took a step back from me. Or maybe from the shoes.

She shook her head. “No, it’s fine. I had just been thinking ‘Wow, this is an interesting sculpture.’ And then to find out what it all means…”

“I really am sorry.”

I thought a moment. “I don’t understand either. And I’m older than you, so I’ve had more time to figure it out. I was at Terror House today. It left me more confused than ever.”

I explained it was another of the city’s memorials — the building where the Arrow Cross Party, then the Nazis, and then the communists, had tortured and murdered anyone who opposed them.

This time I tried to be less blunt, but I explained how the entire building has been transformed into an exhibit. “You explore the upper floors, which have museum-like displays explaining the history. Then you take a very slow elevator ride down into the darkness of the building’s basement, where you see the concrete cells where the actual tortures took place.”

“That sounds terrible,” she said.

“The history is terrible. But it’s a very effective memorial.” I shrugged helplessly. “When I was your age, I used to go to something like Terror House or this” — I gestured at the shoes — “and I’d think ‘Okay, that was a truly awful time. A low point for humanity. But that’s in the past, and we learned our lesson. We’ve gotten better.’ But lately…”

She nodded. “It feels like things are going in the wrong direction again, doesn’t it? Afghanistan, Trump, the government here in Hungary. Even in Italy.” She looked off across the grey river.

“I’m sorry,” I said. “The world really does feel crazy right now. I apologize that my generation did such a crappy job and left you guys such a mess.”

She offered me a small smile. “I don’t know. Sometimes I think my generation is not much better.”

Our eyes drifted back to the shoes.

I didn’t feel any better about initially coming here to take pictures for Instagram. Talk about missing the point of those forlorn, empty shoes. Although what was the point if the world really was going backward?

We both fell silent, shifting a little in our own real shoes. I didn’t know this person — she was just a random person I’d met. What did we have in common?

Well, this has been a depressing outing, I thought.

It was probably time to move on.

But something kept me standing alongside her.

To my surprise, she didn’t seem in any hurry to leave either.

“That’s a lovely name,” I said. Whenever I compliment a woman, I sometimes worry she might think I’m hitting on her, so I quickly added, “My husband and I are visiting Budapest for a week. But he had work to do, so he stayed in the hotel.”

My phone buzzed, and I checked it.

“Speak of the devil,” I said. “That’s Brent. I guess I lost track of time. I’m supposed to be picking up dinner.”

“No, not at all. But I should get going.” I pointed in the direction I was heading. “I’m headed that way.

She brightened and said, “Me, too.”

With an unspoken mutual agreement, we set off together.

And kept talking. The conversation flowed so easily and naturally, I felt I’d known her far longer than half an hour.

We discussed Brent and our lives as digital nomads, which excited Manjusri a great deal. She loved hearing we were both writers — and shyly shared she had an idea for a fantasy novel herself. I asked about her life in Austria, where she lived now. Our conversation touched on a half-dozen other topics.

Then suddenly we reached the point we were going our separate ways.

That flew by, I thought.

“If you’re ever in South Tyrol” — this was the Italian province where she grew up — “you have to let me know. I’ll tell you where to go.”

“I will,” I said. “And I’m so glad you asked me about the shoes. I’m sorry it was sometimes so heavy, but I truly enjoyed our conversation. Meeting you.”

She beamed. “I did too — meeting you. I don’t usually have such deep conversations with strangers.”

I confessed that right before we’d spoken, I’d felt like I’d been taking pictures of them for all of the wrong reasons. That I’d totally missed the point of the shoes.

“But I wonder if maybe part of the reason for the shoes is conversations like this one,” I went on. “It brought two strangers together. We made a connection.”

And if we humans really are going to prevent more shoes on the Danube in the future, I thought, we’re going to need more connections like this one.

“Tell your husband I really am sorry,” she said.

As I headed back to the hotel, I thought, You never did get that perfect picture.

And I couldn’t have cared less.

Outrage after woman diagnosed with “homosexuality” by her gynecologist