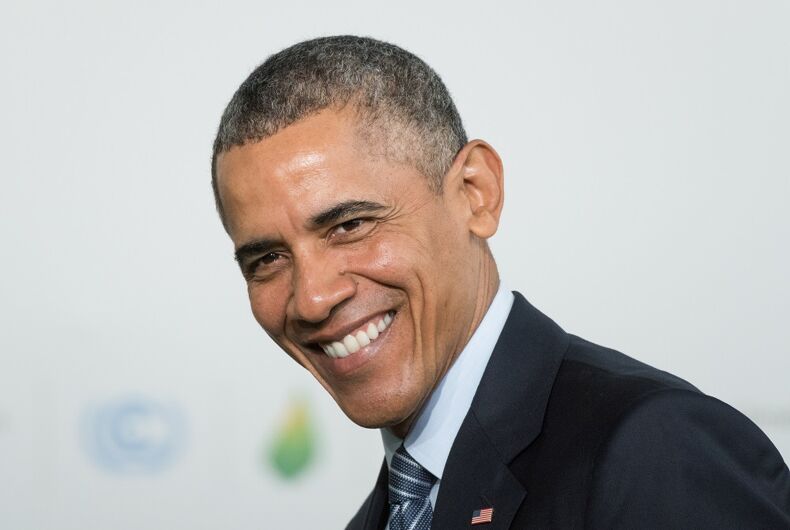 President Barack Obama stood up for marriage equality on Saturday during a speech in Richmond, Virginia in support of the state’s Democratic gubernatorial candidate Terry McAuliffe.

In response to anti-LGBTQ comments from McAuliffe’s Republican opponent, Glenn Youngkin, Obama asked, “Are we still arguing about gay marriage? Really? I thought that ship had sailed. I thought that was pretty clearly the right thing to do.”

A few days earlier, Youngkin told the Associated Press that, while he would respect that marriage equality was “legally acceptable” in Virginia, he did not support it. He added that he feels he is still “called to love everyone.”

McAuliffe responded to the article with a tweet defending marriage equality, declaring, “I worked my heart out to keep Virginia open and welcoming to all. This type of bigotry and intolerance has NO place in our Commonwealth.”

He also wrote how proud he was to the be first Southern governor to officiate a same-sex wedding during his first term in office. He posted a video of the couple, Renée and Katherine, speaking about how special he made their ceremony six and a half years ago.

I was proud to be the first Southern governor to officiate a same-sex wedding. pic.twitter.com/1DTvf0MSFF

In his speech in Richmond, Obama also mocked Youngkin, a wealthy businessman, for his attempts to appear like a regular guy “because he wears fleece.”

He also criticized Youngkin for wanting to audit the state’s voting machines used in the last presidential election.

“Really?” Obama said. “Encouraging the lies and conspiracy theories we’ve had to live through all this time and yet we’re supposed to believe he’s going to stand up for our democracy?”

President Joe Biden has also spoken out in favor of McAuliffe.

Last week, he tweeted out a list of Virginia Democrats he has endorsed for the upcoming election and emphasized that electing McAuliffe is crucial “to keep our progress.”

Building back better starts in the states. Since flipping the legislature in 2019, Virginia Democrats have been a model of progress—including helping us vaccinate folks to beat the pandemic. To keep our progress, we must elect @TerryMcAuliffe and Democrats up and down the ballot. pic.twitter.com/NsJiiPNzlv

In 2019, Democrats took control of the Virginia state legislature for the first time in 26 years. Since then they have worked quickly to pass a slew of progressive legislation, including several LGBTQ rights bills.

Among other legislation, the state banned conversion therapy for minors, became the first Southern state to add LGBTQ anti-discrimination protections, and increased protections for transgender students.

Youngkin is also not the only Virginia Republican who has voiced anti-LGBTQ beliefs during this election cycle.

Danica Roem (D), who is running for reelection in the Virginia House of Delegates and was the first out trans person elected to any state legislature, is running against anti-LGBTQ Republican Christopher Stone.

Stone is opposed to marriage equality and adoption rights for LGBTQ couples. He has also voiced support for religious exemptions to anti-discrimination laws.