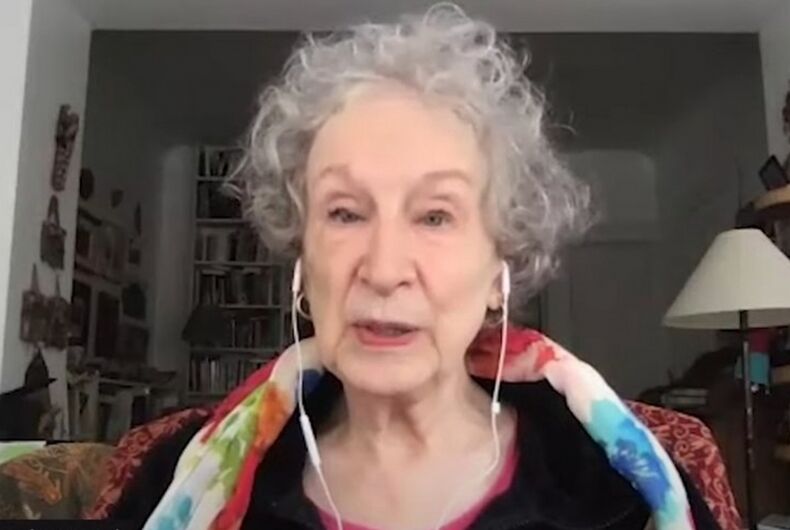 Margaret Atwood, the feminist author of The Handmaid’s Tale and numerous other novels, has been criticized for sharing an article that railed against gender-inclusive language as “trans activism run amok.”

On October 19, Atwood shared a Toronto Star opinion article entitled, “Why can’t we say ‘woman’ anymore?” by Rosie DiManno. Atwood reposted the article on Twitter without adding any additional commentary.

In the article, DiManno complained about how the “social media mob” is contributing to the “erasure of women” by suggesting that others use transgender- and nonbinary-inclusive terms like “person who menstruates” or “person with a cervix.”

“‘Woman’ is in danger of becoming a dirty word … struck from the lexicon of officialdom, eradicated from medical vocabulary and expunged from conversation,” DiManno wrote.

DiManno focused on the fact that various British medical organizations, the ACLU and U.S. politicians have recently used phrases like “persons”, “birth people”, “menstruating people”, “bodies with vaginas” and “birthing people” to refer to women, nonbinary, and transgender people.

“These examples go far beyond insistence on neutral pronouns, into an outer orbit of linguistics where both women, as a gender, and “woman” as a noun are being blotted out,” she continued. “There’s more than a whiff of misogyny to it. Why ‘woman’ the no-speak word and not ‘man?’ Why not ‘persons who urinate standing up’ or ‘people who eject semen’?”

Concern trolls like DiManno act as if people pushing for gender inclusivity in language are trying to eradicate women rather than just expand society’s conception of trans women, non-binary women, and other people with vaginas. Absolutely no one has told anyone the word “woman” has been banned.

Commenters on Twitter were mostly kind, reminding Atwood of why it’s important to use gender-inclusive language.

I’ll never understand why changes like these are resisted when they make room for people that have been oppressed or are living under oppression. WHY?! It’s no skin off your ass.

This is exactly the same argument as "they won't let us say Christmas anymore!" The emergence of some attempts at more inclusive language hardly erases the still overwhelming cultural dominance of more traditional language.

It's more inclusive to use the more recent terminology. Of course people can feel free to say "woman" or "man", but to be fully inclusive of people who don't identify as such, it is often better to use other terminology. Please embrace or at least don't discourage inclusivity.

Heartbreaking to see someone with a vast imagination & stellar language skills failing to use both. I guess it’s easy to dismiss the “tiny portion”* of affected people when you don’t care about them

It’s not entirely clear why Atwood shared the article, especially since she was one of 1,200 people from the U.K. and Irish publishing community who recently signed a letter advocating for the rights of transgender and nonbinary people.

“This is a message of love and solidarity for the trans and non-binary community,” the letter said. “Culture is, and should always be, at the forefront of societal change, and as writers, editors, agents, journalists, and publishing professionals, we recognise the vital role our industry has in advancing and supporting the wellbeing and rights of trans and non-binary people.”

“We stand with you, we hear you, we see you, we accept you, we love you,” the letter continued. “The world is better for having you in it. Non-binary lives are valid, trans women are women, trans men are men, trans rights are human rights.”

But Atwood insisted that the author is “not a TERF” and that the piece should be read while also retweeting one user’s reply to her.

“We can say women. And we can say people when that’s more accurate and inclusive,” the tweet read. “Women are people.”

Read her piece. She’s not a Terf. https://t.co/KLMmf0FwAq