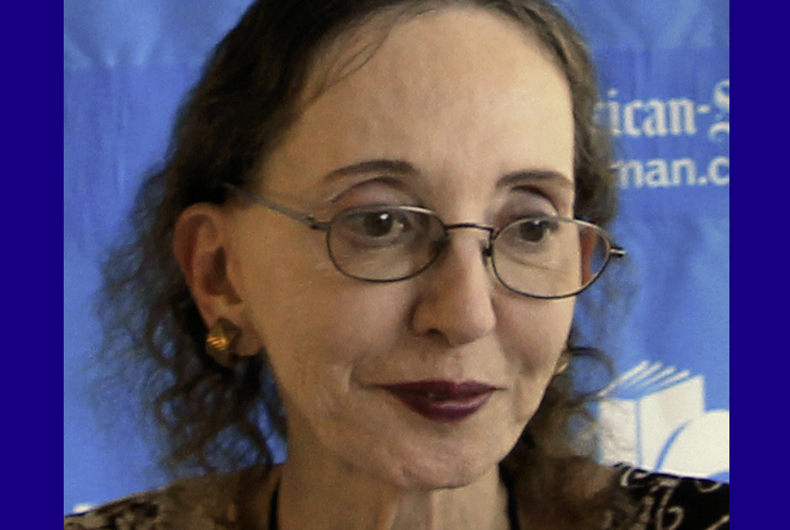 But in a refreshing twist, Oates listened to her critics, learned how her words were harmful to some people, and wrote a sincere apology, providing a blueprint for how other famous artists and thinkers can approach the public with an open mind.

Related: Gender-neutral pronoun ‘they’ is Merriam-Webster’s word of the year

Late last night, the 83-year-old writer and professor tweeted that she believes “‘they’ will not become a part of general usage, not for political reasons but because there would be no pronoun to distinguish between singular subject (‘they’) & a plural subject (‘they’). language seeks to communicate w/ clarity, not to obfuscate; that is its purpose.”

"they" will not become a part of general usage, not for political reasons but because there would be no pronoun to distinguish between a singular subject ("they") & a plural subject ("they"). language seeks to communicate w/ clarity, not to obfuscate; that is its purpose. https://t.co/uRhYJKP0LB

Readers pointed out how old Oates’s argument is, how long “they” has been used as a singular pronoun in English, how “you” used to only be plural until the 17th Century, and how disheartening it is for non-binary and transgender people to get talked down to when they ask for specific pronouns.

Can cis folks just leave us alone for a day? One day, that's all I ask. Would that be possible? I'm just wondering. https://t.co/iYvObBYhSi

Someone has lost their wallet. I wonder where they have gone. I hope they come back so I can return it to them.

You're dumb as a brick, Joyce. Ship's sailed.

That could have been where the story ended if Oates were like another famous white, cis, straight, wealthy author who has also made anti-trans statements on Twitter: J.K. Rowling. But instead Oates continued to talk to fans on the topic and eventually showed that she learned something from the exchange.

First, she said that her original tweet was intended as a prediction, not as a normative statement. She also said that she’s “happy” to refer to someone with they/them pronouns if “so requested.”

I am happy to say "they" if the context requires & a person has so requested. my remarks were that it is not likely that a plurality of English-speaking persons will use "they" in referring to an individual, not that it is good or bad; just a neutral conjecture. & generational. https://t.co/GDS1KAgHU0

But she still seemed to think that most people don’t use singular-they, calling the usage which has been around since at least Shakespeare “generational.”

but I do use "they" in this context, often. of course: language does evolve.
it may be generational, or related to education, geography, politics: people not active on Twitter, or who don't read books, approximately 94% of Americans. https://t.co/Q5nfL21XoF

(but I do use "they"–often! I wasn't talking about myself. I was speculating about the probability of a general use of the term, not a highly specialized use, as in, for instance, the majority of Americans who are not "woke" or even anti-"woke." just–not au courant.) https://t.co/EPAHQCUluj

Oates agreed with one person who said it’s just “respectful” to use they/them pronouns for people whose pronouns are they/them.

absolutely true! originally, I was responding to an Op-Ed column by John McWhorter, but that link has been lost. I do use "they"/ "them" often. I am not suggesting that it is kind, or unkind. I was speculating about a general usage, not necessarily related to my academic life. https://t.co/xHJRDgYiGa

Then she retweeted someone explaining that using singular-they to refer to an unknown person is “used all the time.”

With all due respect language changes to accommodate new axioms and distinctions A singular they is used all the time. " Someone broke in my house THEY left fingerprints " we don't know if it was a man or a woman and we are not specifically indicating multiple ppl

Later, she apologized to non-binary and trans people for her words.

“I didn’t at all mean this,” she wrote, replying to someone who explained that “being trans in this world is hard enough without the most powerful voices in our profession using their enormous platforms to attack us and try to invalidate our identities.”

“I do use the singular ‘they’ pronoun often,” Oates continued. “it was purely a speculative tweet & not meant to ‘invalidate.'”

gosh! I did not at all mean this. I do apologize, truly. you are quite right. (but it's very hard to think of myself as a "powerful voice"–as one who lives with cats.) I do use the singular "they" pronoun often. it was a purely speculative tweet & not meant to "invalidate." https://t.co/i7u6OBsKBo

“it’s purely a misunderstanding,” she told another person who said Oates “provided respectability to all the vicious transphobes out there.”

“I am 100% supportive of transpersons & have always been an adversary to those who are cruel to others, especially minorities,” Oates wrote. “so, thank you for correcting.”

it's purely a misunderstanding, which, I can see, issued from the brevity of the tweet. it had been longer–& had been cut. I am 100% supportive of transpersons & have always been an adversary to those who are cruel to others, especially minorities. so, thank you for correcting. https://t.co/nOcBgnDgz4

Oates even clapped back at a Twitter user who calls themselves “liberal, not woke” who tried to stand up for her by accusing her critics of “cancel culture.”

“I think that words, however inadvertant, can harm, especially psychologically,” Oates wrote.

but I think that words, however inadvertent, can harm, especially psychologically; so, what was meant as a linguistic speculation, had evidently real-life significance, not unlike taboo words which we should respect for their meta-linguistic power. https://t.co/hsGWDocpdj

At least one fan was glad she apologized.

(I am well aware of the power of language to isolate & hurt–like slur words, which can be weaponized. it had just not occurred to me that a purely amateur speculation about language could have such real-life meaning; this is good to know. really!) https://t.co/lDTx4ligrE

Oates’s Twitter presence is… interesting. Earlier this week, she called out Halloween decorations as insensitive to people who are grieving loved ones.

(you can always recognize a place in which no one is feeling much or any grief for a lost loved one & death, dying, & everyone you love decomposing to bones is just a joke.) https://t.co/1OuMqgw550

Which children are in danger when screaming parents storm school board meetings?