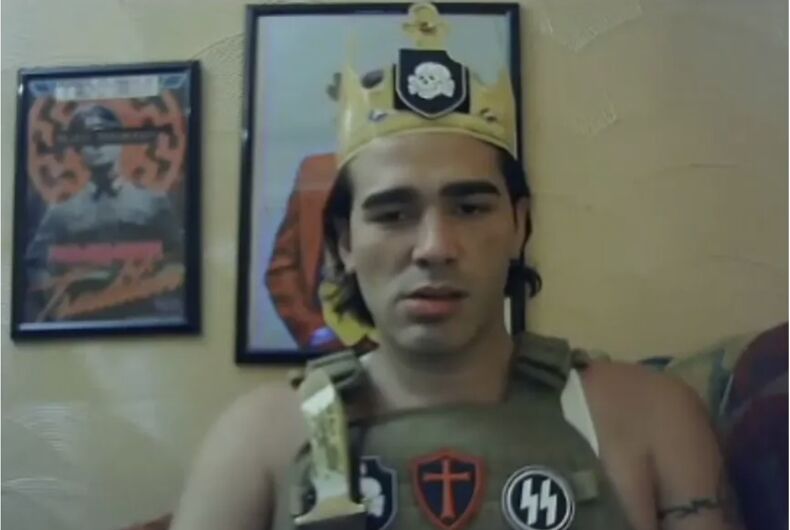 A Proud Boy TikToker who called for a racist civil war was crying in court as the judge sentenced him to three years and five months in prison on various firearms charges.

Prosecutors had played a recording of a phone call he made while in prison where he seemed downright happy about the support he was getting from his online fans after his arrest and was already planning for his return to fame after what he expected to be a much shorter prison sentence.

Prosecutors in Fort Lauderdale said that Paul Nicholas Miller, 33, (aka “Gypsy Crusader”) spread hate on social media, dressing up as characters like Mario and the Joker while he advocated for a race war.

He’s also allegedly affiliated with the Proud Boys, a hate group that promotes violence among its members as well as racism, anti-semitism, and homophobia, with the group’s founder defending their practice of shouting “faggot” while beating people.

Miller went to leftwing protests – like those the following the police killing of George Floyd last year – and shouted slurs like the n-word. He also attended Trump rallies where he shouted things like “only white lives matter” and “Heil Hitler” at counter-protestors. He recorded himself and played the videos for his online followers.

“We all gotta sacrifice for something, you know what I mean?” Miller said in a video posted to YouTube late last year. “I’m old. I’m getting old. I’m 32 years old, I don’t have children, I don’t have a girlfriend. If they kill me, what is lost? Nothing. Nothing is lost. The only thing that it will do is accelerate what must happen, that’s it. My life was worth something.”

This past March, the FBI raided his home and arrested him on illegal firearms charges. Law enforcement found several unregistered weapons and a stockpile of ammunition as well as his his social media activities. He had a prior arrest in 2018 for possessing a firearm as a convicted felon.

“I am very sorry about this,” Miller told the judge at the time. “I really am.”

The judge refused bail, he hired free speech attorney Norman Kent, and he pled guilty to several charges this past June.

Yesterday, at his sentencing hearing, prosecutors played a recording of a phone call he made in prison to a friend, where the friend told him “You’re blowing up on TikTok! Like, I see videos of your old content, getting like 400,000 likes and stuff, and people saying, like, ‘We miss you kid.'”

But that’s not what ended up happening. Prosecutors played that call for the judge and portrayed Miller as a dangerous white supremacist who bought an excessive amount of ammunition “in preparation for a coming civil war.”

They also brought up his social media activity, saying that he “made hundreds of internet posts publicizing his animosity towards various minority groups and his support for the initiation of a race-based civil war in the United States” in the months leading up to his arrest.

Miller was sobbing in court, according to NBC Miami, as the judge sentenced him to over twice the prison sentence that he expected to get.

My university has been targeted by white supremacists. This is what I’m sharing in response.