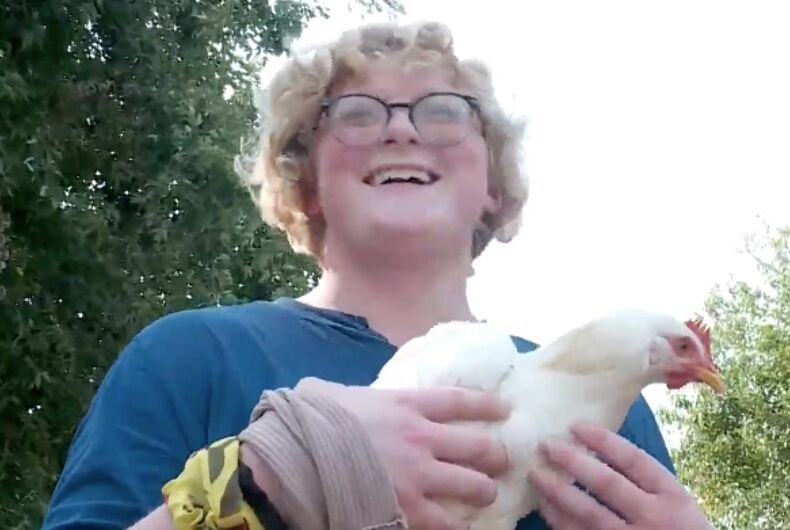 When Dax, a 16-year-old non-binary LGBTQ child in Oklahoma, was adopted seven years ago, they thought they had found their “forever family,” the guardians who would stand beside them for life.

“It was nice,” Dax told KFOR, “but then they like, they started not loving me anymore for who I was, being LGBTQ.”

Related: Man adopts his daughter’s best friend who was rejected by their own dad when they came out

Now, Dax is searching for a new family to adopt them.

The aforementioned news station featured Dax on TV this week in the hopes of getting them an ideal home. Because Dax had experience raising chickens, they took them to a chicken farm. There, they showed their nurturing side, mindfully feeding the hens and then gently cuddling them as their face lit up.

Dax also loves school, they said, though partly because it offers them an escape from home pressures. They also said they’d love a family to “give me a chance.”

Ideally, Dax would love to be adopted by a same-sex couple who is understanding of their situation as an LGBTQ teen. But more so, they want a family who enjoys doing “family stuff”, like going bowling or taking road trips.

“Give me a chance,” Dax said. “I’m open-minded, I care about a lot of different kinds of people. [I have] a good soul.”

Technically, adoptive parents can’t un-adopt someone. They can, however, voluntarily surrender their child to foster care or give up their parental rights so that the child can be adopted by someone else. It’s similar to dis-owning a child, but with extra steps.

Several studies have shown that LGBTQ young people are overrepresented in child welfare systems. Some never come out because they worry about harassment or abuse for their LGBTQ identity. As a result, they’re disproportionately likely to leave the foster care system without a permanent family.