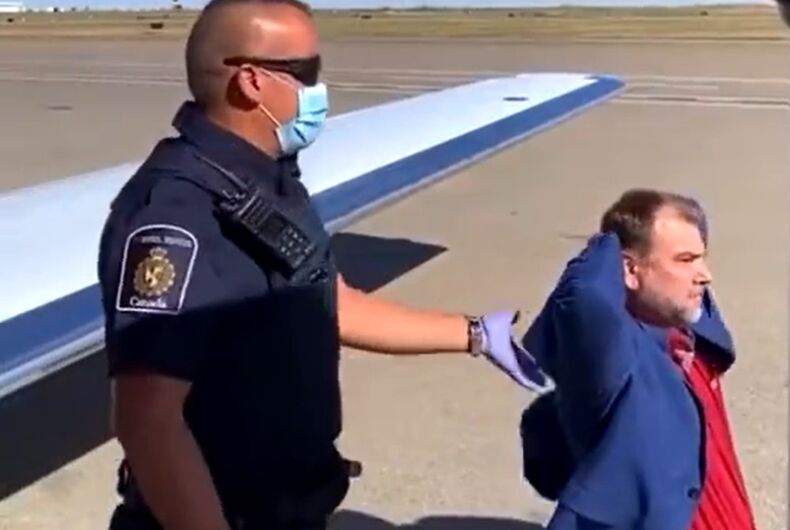 Pastor Artur Pawlawski getting arrested on the tarmac as he arrives in Canada.Photo: Screenshot

A viciously anti-LGBTQ pastor was arrested on the tarmac as he exited a plane in Canada after touring the U.S. to spread COVID-19 misinformation on a contempt of court charge.

Cave of Adullam Pastor Artur Pawlowski was taken into custody by police at the Calgary International Airport yesterday afternoon, returning from a speaking tour in the U.S. that included meeting Eric Trump and an appearance on Fox News.

He was previously arrested this past May for allegedly violating pandemic restrictions at his church, which he transformed into a publicity tour in the U.S.

Authorities have not said exactly why he is facing contempt of court charges. His lawyer Sarah Miller told Global News that it was related to a June 5 offense. Attorney Ron Filipkowski suggested that it could be connected to his May arrest and subsequent departure from the country.

Pastor Artur Pawlowski was arrested today at the airport in Calgary, after he returned from a 4 month tour of the US, where he was a darling of MAGA media. He spent every day in the US spreading lies and vaccine conspiracies on TV and speeches around the US. pic.twitter.com/9lWcKNrAJh

Of course, he also made several appearances on Fox. pic.twitter.com/vs2pPXQIF5

Pawlowski is notorious for his anti-LGBTQ extremism, writing on the Street Church website that the 2013 Alberta Floods were God’s punishment for the “perversions of homosexuality which includes the walking out the pride of their abominations in the streets of our cities.”

Soon after, a local conservative leader was embroiled in controversy for getting his picture taken with Pawlowski and a message that said gay people “are not ashamed to declare the name of their master (Satan) and in the same way not concerned with provoking greatly the wrath of the Living God.”

In 2017, he organized a “Defense of Christianity” rally that turned violent. Pawlawski invited an anti-gay activist who was prosecuted under Canada’s hate speech laws for distributing pamphlets entitled “Sodomites in our Public Schools.”

He tried to organize another rally with the same anti-gay activist in 2019 and told the Calgary Star in an interview that he opposes the “perversion” of homosexuality and said that LGBTQ people are “sinners.” He also denounced “homo-fascism.”

This past year, Pawlowski has been more focused on opposing measures to fight the COVID-19 pandemic, organizing anti-mask rallies, refusing to follow COVID-19 restrictions at his church, and calling the public health inspector and police “Nazis” and “Gestapo” for trying to enforce pandemic restrictions on Easter.

That Easter confrontation led to his first appearance on Fox News, where he compared pandemic restrictions to communism in Poland.

“Police officers could break into your house five in the morning, they could beat you up, torture, they could arrest you for no matter what reason they would come up with,” he said about growing up in Poland. The police who visited his church in Canada didn’t beat anyone up or torture anyone, and their reasons for entering his church were clear.

This past May, Pawlowski and his brother Dawid Pawlowski were arrested and now face several charges in connection to organizing an illegal in-person gathering, with police saying that he “chose to ignore requirements for social distancing, mask-wearing, and reduced capacity limits.”

The two were later found guilty of contempt of court for violating health orders again, allegedly organizing a large event and telling people not to follow pandemic restrictions as hospitalizations in Alberta surged higher than at any point during the pandemic.

That May arrest gave Pawlawski another 15 minutes of fame on the right, so he toured the U.S., appearing again on Fox News and asking for Americans’ “help in Canada” to fight COVID-19 restrictions. He said that he has received 30 citations for violating pandemic restrictions.