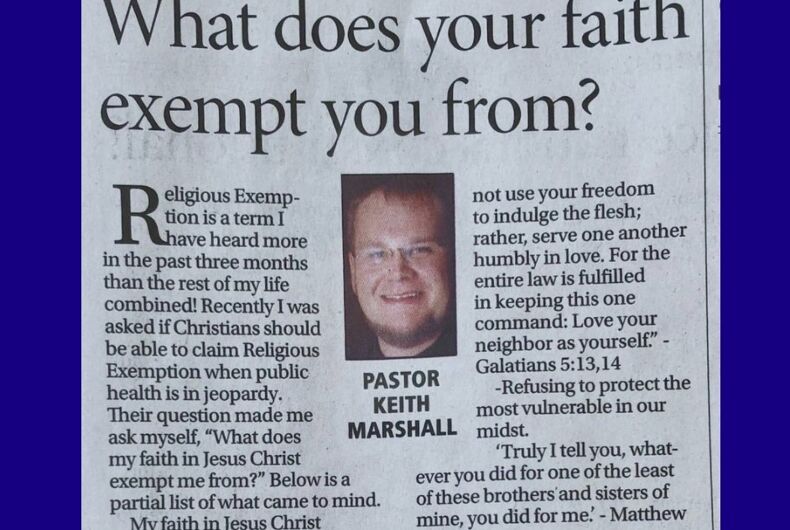 A Lutheran pastor has gone viral after a column he wrote for his small town newspaper went viral for its no-nonsense approach to Christians claiming religious exemptions to social responsibilities.

Pastor Keith Marshal of the Hope Lutheran Church in Enumclaw, Washington – population 11,879 – wrote a short column for the Enumclaw Courier Herald that he thought would “go around my small Facebook world,” but the entire country can’t stop sharing it online.

“Religious exemption is a term I have heard more in the past three months than the rest of my life combined!” the exasperated pastor opened his column.

Recently the concept has become a popular argument against COVID-19 restrictions, even when there is no obvious link to Christian theology. For example, a Denny’s server quit on the spot last year as two men belligerently tried to claim religious exemptions to wearing masks in the restaurant, and some pastors are giving “religious exemption” letters to congregants to get out of vaccine requirements, even though Christianity has generally not been opposed to masks or vaccines in the past.

But Marshall reframes the question of religious exemptions as: “What does my faith in Jesus Christ exempt me from?”

“My faith in Jesus Christ exempts me from: putting my wants above the needs of others,” he wrote, sharing a passage from Philippians.

“Claiming my freedom in Christ as liberty to act without responsibility,” he continued, citing Galatians.

“Refusing to protect the most vulnerable in our midst,” Marshal wrote, this time citing the Book of Matthew.

“Therefore, my ‘religious exemption’ requires I receive the COVID vaccination to safeguard life, and wear a mask to care for my neighbor,” the pastor wrote.

“By invoking the name of Jesus to claim exemption, you are using the Lord’s name in vain and therefore sinning,” he concluded. “Now, you may have your own political or personal reasons not to do so, but please, stop claiming your faith in Jesus Christ as justification.”

Should Christians be able to claim religious exemption from masks and vaccines? Not according to Pastor Keith Marshall. And he brought receipts. pic.twitter.com/3cILf6OxuT

I hope she read this pastor's thoughts on religious exemptions. pic.twitter.com/y9iYM14fFu

This has been my exact response to people asking me to “provide a letter for religious exemption”:

While you may have your own medical or political reasons, you cannot claim exemption in the name of a faith that doesn’t teach you to exempt yourself from care of neighbour.

On Facebook, Marshall wrote that he didn’t think his column in the local paper would be so popular. He also said that his “heart is broken with nasty things written” to him by people who disagree with him and made his account private to protect his family.