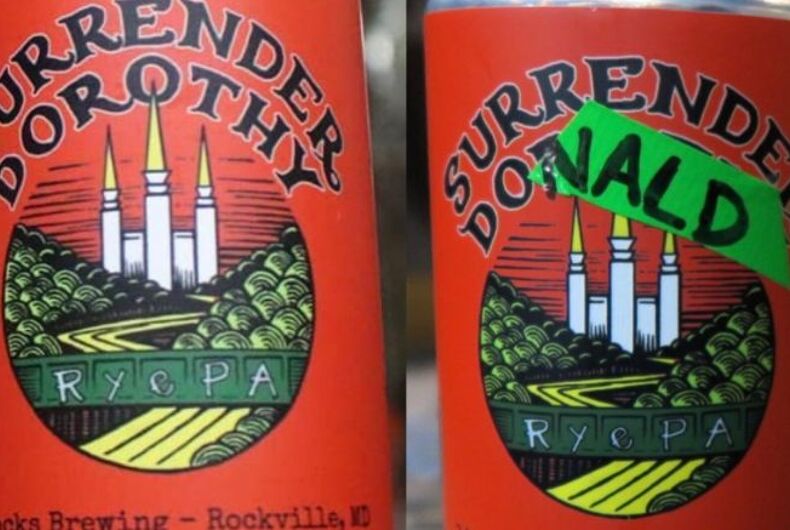 7 Locks Brewing has lost a battle with Turner Entertainment over the name of their popular "Surrender Dorothy" ale.Photo: 7 Locks Brewing

7 Locks Brewing has been forced to change the name of their popular Surrender Dorothy beer after Turner Entertainment objected to their petition to trademark the name.

While the books are in the public domain, the media giant has trademarked the name “Dorothy” and insists that a Mormon temple featured on the label too closely resembles the Emerald City in their classic movie that’s almost 100 years old.

Related: Quentin Tarantino says he owes his career to the “Golden Girls”

The D.C.-area brewery names their beverages as nods to local landmarks. The Surrender Dorothy ale was named for a message that regularly appeared on a railway bridge over the Beltway around the nation’s capital.

The message was changed during the Trump presidency to say “Surrender Donald.” The company released a special edition of the ale that changed the name to incorporate the tweak.

Since the 1970s, every time the bridge gets repainted to remove the graffiti, someone sprays the words right back on the overpass.

The graffiti was framed in front of a Mormon temple with the interstate seemingly running to it like a low-grade Wizard of Oz and became a highlight of local commuters’ route home. Turner, however, didn’t find it funny.

The ale’s can featured the temple, graffitied bridge, and the road was yellow. The new design turns the road grey and you can only read “Surrender Doro…” on the bridge because a man in a hard hat is covering up the graffiti.

“Basically, Turner owns the rights to The Wizard of Oz,” Keith Beutel, co-founder of 7 Locks, told the Washington Post. “They claimed that we were using the term ‘Surrender Dorothy’ and they didn’t want any confusion with their branding.”

“We did have a trademark lawyer that navigated things for us for about a year and a half,” Beutel said. “But that year and a half means bills pile up. We could have continued the fight, but we’re a small business. It’s tough to continue that fight against a large corporation. And we still saw a creative opening for us to continue the story with a different name.”

Beutal joked that the National Park Service thankfully wasn’t after the company for naming another beer “Billy Goat Trale” after a popular hiking spot in the area.

“There’s no concern with [the National Park Service] coming after us,” he said. “Let’s hope that’s not the case.”

Tucker Carlson begs man to prove his balls are swollen