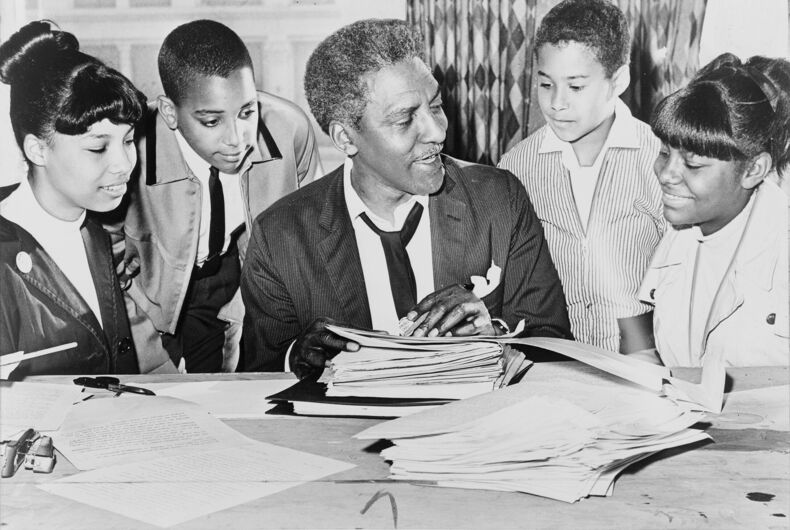 Bayard Rustin (center) preparing for a demonstration in 1964.Photo: Ed Ford/Library of Congress

The upcoming film Rustin, depicting the life of Black gay civil rights activist and organizer Bayard Rustin, is seeking extras in the Washington D.C. area for when the movie begins production in early October, as well as Pittsburgh, Pennsylvania starting this month and throughout the rest of the year.

Related: She grew up with MLK and was Kamala Harris’ gym buddy. Meet Donzaleigh Abernathy.

Rustin is a film being produced by Netflix in conjunction with Higher Ground Productions, the entertainment company by former President Barack Obama (D) and First Lady Michelle Obama, as a part of the deal the Obamas signed with the streaming company in 2018.

Out director George C. Wolfe, most recently known for directing the critically-acclaimed film adaptation of Ma Rainey’s Black Bottom, is set to direct Rustin. Dustin Lance Black, the winner of an Academy Award for Original Screenplay for the film Milk on Harvey Milk, will be a writer and producer as well.

The film chronicles Bayard Rustin, who devoed six decades of his life to the fight for equality: for civil rights and gay rights through nonviolent protest. He met Martin Luther King Jr. in the 1950s, and he started working with him as a strategist in 1955.

But fellow leaders in the movement leaders took issue with his identity as a gay man. Rustin had been arrested on a morals charge in 1953. He’d been derided as a communist, a draft dodger, and a gay man.

Nevertheless, Rustin went on to serve as a lead organizer of the 1963 March on Washington, a pivotal demonstration in the nation’s Civil Rights history that drew thousands of people in a peaceful protest of racial inequality and injustice.

In 2013, President Obama awarded him the Presidential Medal of Freedom posthumously, 50 years after the march.

In 2020, California Gov. Gavin Newsom (D) pardoned Rustin posthumously for the conviction that stained him from the 1953 arrest.

The film does not yet have a slated release date.

As for details about the film, and what’s expected of extras, Locke told WTOP, “It is a period piece. We’re coming to Washington, D.C. to recreate the March on Washington for Jobs and Freedom.”

Anyone interested in taking part in the filming encouraged to apply by emailing their name, age, height, weight, phone number and three photos, professional headshots or “well-lit” selfies.

“You need to have natural color hair,” Locke said, and “men need to be clean-shaven … because you’re recreating an entire period that’s different from modern style.”

Interested candidates for being extras in Washington should apply as soon as possible, as the scenes slated to be filmed between October 4 and 8, and pre-fittings are being done on September 20. The majority of extras will need availability on all five days.

Non-union extras will receive $250 for a day of filming, $75 for COVID-19 testing and $75 for costume fitting. Union members will receive rates in accordance with SAG guidelines.

Again, applications should be emailed to [email protected]

The Pittsburgh portion of production begins later this month on September 27, and runs through December. Locke is collaborating with Mosser Casting for casting there, and an open call was held last month.

Mosser encourages interested candidates to create a profile in their talent database on their website, MosserCasting.com. Locke and the Pittsburgh Film Office also shared another call for extras to apply by email, similar to the Washington call for applicants. Currently, the casting directors are searching for children especially to film later this month, they shared on Facebook.

Pay is $168 for the expected 12-hour workdays for non-union extras. Union members will receive rates in accordance with SAG guidelines. COVID-19 testing pay will be $84.

EXTRAS NEEDED in the Pittsburgh region for the feature film RUSTIN. Please review application requirements (listed in image) and apply via email to: [email protected] pic.twitter.com/w5feyqNeO6