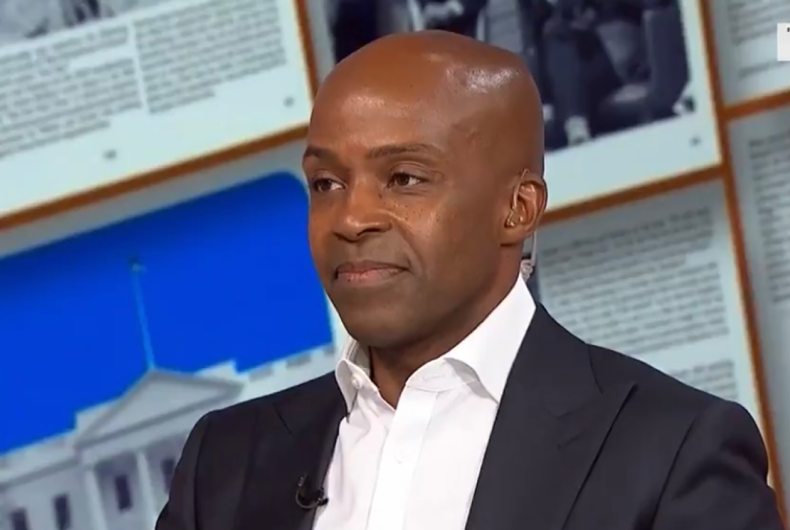 Former Human Rights Campaign (HRC) President Alphonso David opened up about the fallout from the investigation into former New York Gov. Andrew Cuomo (D) that eventually led to his own firing last week.

David sat down with out MSNBC anchor Jonathan Capehart in an appearance on the Sunday Show to discuss where he is going from here. David alleges that he was treated differently based on his race at the organization, citing past presidents and leaders who were white that were not being pushed to resign after controversies followed them.

This marks the first time that David has spoken publicly since his firing was first reported last weekend in the New York Times, hours before some employees at the LGBTQ organization were even told. HRC COO Joni Madison has become the acting president in his place.

Capehart brings up David’s initial tweets in response to the allegations that he had helped Cuomo in his response to the sexual harassment accusations. “You’re very specific in what you said in the first statement and then the second statement,” Capehart noted.

“That makes me wonder this, did you tape those phone calls with those members of the Human Rights Campaign board… those conversations, how were you so specific?” he asked.

“I will say, Jonathan, I have well documented notes of those conversations,” David responded. “I have evidence to support my conclusions, and my statements that I issued.”

David continued, “This organization was created in the 1980s and largely has been viewed as an organization for white men. And I came on, as a Black man, to really challenge some of the systems that have been ingrained in this institution, and I am being treated this way — I am being treated differently, I believe — because of my race.”

David notes that previous HRC presidents have “engaged in activities or made statements that caused disruption… that resulted in protests in front of the building.

David says he chose not to resign, and had the encouragement of many others not to as well, because he wanted to stick to his convictions.

Capehart then asks what David would say to HRC’s community and the LGBTQ community “who take issue with the AG’s report, your role there, and just on the face [of that]… that you shouldn’t be the leader of the organization, given that it is a human rights organization?”

“We can’t change the rules in the middle of the game,” David responds. “We can’t decide to conduct an independent investigation and then decide not to issue findings and not decide to issue a report, and ignore transparency. If we are a human rights organization, if we are a movement that is transparent, we need to make sure that movement is transparent for all of us.

David has previously appeared on Capehart’s shows and sat down for interviews with him on podcasts and forums, such as a conversation held and published by the Clinton Center.

In New York Attorney General Letitia James’ August 2021 report on her investigation into the sexual harassment allegations against Cuomo, she found that David forwarded the personnel files of accuser Lindsey Boylan to the governor’s office, which he claims is required. Some of Boylan’s files were then leaked to the press to try and discredit her.

David was then asked to sign a letter that questioned Boylan’s motivations; he suggested edits but refused to sign himself. The letter was never released.

After expressing confidence in him, HRC eventually hired “an experienced outside law firm,” Sidley Austin LLP, to investigate David’s actions independently in August, although Sidley Austin has previously partnered with the organization.

Then, days before his firing, David publicly said that HRC’s investigation into him had cleared him of all wrongdoing. The HRC’s board said his statement was untrue.

“Yesterday and today, Mr. David released a statement that included significant untruths about the investigation and his status with the organization,” HRC board co-chairs Morgan Cox and Jodie Patterson said in a statement announcing his firing. “At HRC, we are fighting to bring full equality and liberation to LGBTQ+ people everywhere. That includes fighting on behalf of all victims of sexual harassment and assault.”

After his firing, David issued a statement saying in part that HRC should “Expect a legal challenge.” He had been otherwise quiet since his expulsion, other than a post on Twitter thanking his friends and supporters that have helped him through “a challenging time,” and promising “much more to come.”

David became the first Black person, or person of any color, to lead the Human Rights Campaign in 2019. HRC has long been criticized for its lack of diversity and history of transgender exclusion, but David’s selection to head the group indicated that they were finally catching up to the challenges facing the modern queer movement outside of marriage equality.

Instead, David’s alleged actions and firing has dredged up concerns with HRC’s past, with one former employer telling The 19th, “HRC faces a credibility crisis, yet again, which is really troubling, because I think that, it takes much longer to build credibility than it does to lose it.”

The organization has yet to respond to David’s allegations in the interview.