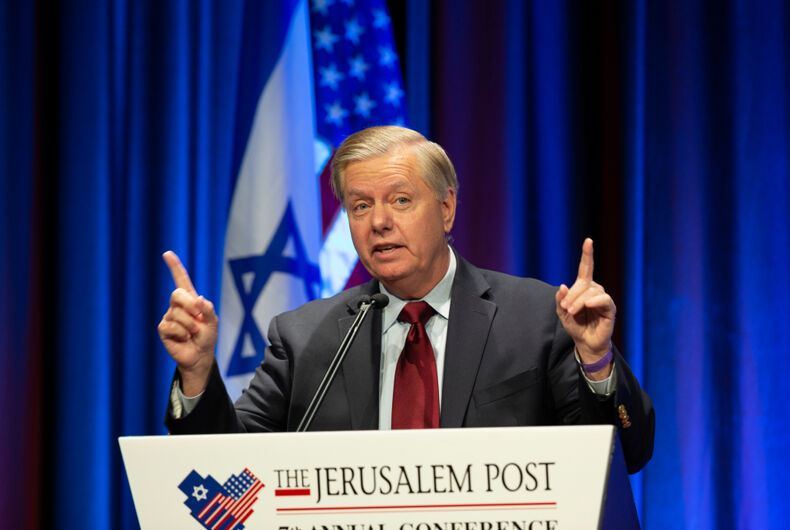 No one tops Republican South Carolina Lindsey Graham for sucking up to former President Donald Trump. In Graham’s eyes, nothing Trump could do would ever be wrong. And yet in the post-Trump era, nothing Graham does is good enough.

Last week, Fox News host Tucker Carlson took aim at Graham for not blocking President Joe Biden’s judicial nominees. As the ranking Republican on the Senate Judiciary Committee, Graham has voted in favor of all eight of Biden’s first picks. The appointments are happening earlier and in larger numbers compared to previous administrations.

That was enough to send Carlson into well-rehearsed orbit.

“Senate aides tell us that because of Lindsey Graham — one man — the Biden Administration is able to rush its nominees through the Senate confirmation process faster than any other president in memory,” Carlson complained. “So the most radical president of our lifetime gets the most judges confirmed thanks to Lindsey Graham.”

Carlson’s solution? Sending Graham to political Siberia. Short of that, Carlson satisfied himself by calling Graham a coward.

“The question is, why are conservatives continuing to promote him and allowing him to continue to sit on the judiciary committee? Well, we would love to ask that question of Lindsey Graham himself,” Carlson intoned. “We have asked him many times to come on the show but he refuses because he’s afraid. And that’s a shame, that would be a very interesting, fact-based conversation.”

What made the whole episode a case study in manufactured drama was that Carlson then wrapped up his program as planned and turned it over to his colleague Sean Hannity.

Graham used his appearance on Hannity to call for Biden’s impeachment over the U.S. withdrawal from Afghanistan — the very same one that then-President Trump negotiated.

Of course, Graham refused to vote for Trump’s impeachment for inciting the January 6 insurrection at the Capitol. Even the threat to his personal safety couldn’t stop Graham from slobbering over the ex-president. After complaining, “Count me out” after the mob stormed the Capitol, Graham immediately backpedaled once Trump excoriated him.

Of course, nobody will ever outflank Graham on the right, at least publicly. This is the Senator who claims to have an AR-45 at his home to fight off “the gangs.” He has vowed to “go to war” to protect Chik-Fil-A from Catholic students.

In another interview with Hannity last March, Graham vowed to “talk until I fell over” to prevent the Equality Act from passing. He said the LGBTQ anti-discriminaion measure would be “destroying the difference between men and women.”

None of this has quite satisfied right-wingers who are suspicious about Graham’s conservative bona fides. Just after the Capitol insurrection, Graham was confronted at a D.C. airport by Trump supporters who called him a “pedophile,” “traitor,” “liar,” and a “sex trafficker.” (Surprisingly, they didn’t use homophobic slurs, considering the unconfirmed rumors that have dogged Graham for years.)

As vile as his attackers are, they have some grounds for their suspicions about Graham’s loyalty to Trump. When Trump was a candidate in 2016, Graham branded him as “a race-baiting, xenophobic bigot.”

Carlson’s high dudgeon about Graham reveals the ongoing uncertainty in the GOP about the party’s future. Is it Trump that has a grip on the party or is it Trumpism? Carlson is aiming for the latter, positioning himself as the new voice of the forgotten (white) American.

Whatever the outcome, Graham is likely to be a casualty. He may have survived his re-election battle last year, but he is, as The New York Times put it, tap dancing for relevance. He’ll do his best to keep fanning the flames of the culture wars, but it’s going to be on a stage where Graham will always be one step behind.

Bullied trans teen found “crying, scared to death” but school says it was his fault