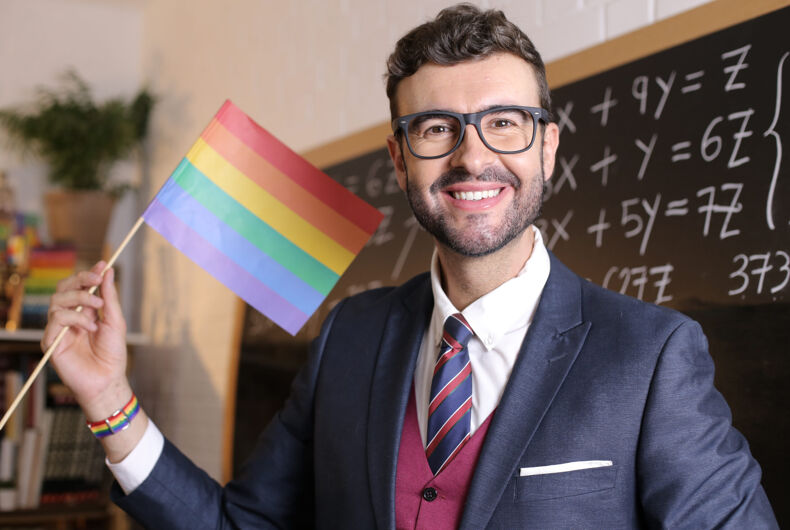 The Bluffton-Harrison Metropolitan School District of Indiana is considering a ban on rainbow Pride flags after a parent freaked out over one being displayed in an 8th-grade classroom.

A parent contacted the school district to alert them about the “controversial material” being displayed in a middle school classroom, District Superintendent Dr. Brad Yates wrote in a note to families.

Related: Residents build giant Pride flag in view of high school after school board bans it

The parent claimed they were worried that the flag would be “a trigger for student disciplinary issues,” as if merely seeing a rainbow flag would cause students to misbehave.

Yates informed families that the district is now consulting with legal counsel over the matter. The school board is also holding a special meeting on Tuesday to help develop “a school policy to outline parameters for controversial topics displayed in our classrooms throughout our district.” The district said it hadn’t considered the topic until the parent spoke out.

However, the local LGBTQ organization, Fort Wayne Pride, spoke out against those who think the flag promotes “divisive” topics of sex and politics in the classroom.

“When an LGBTQ student or students from LGBTQ families see a rainbow flag, they know they have entered a safe space. Students who are not LGBTQ also know they have entered a space where bullying will not be tolerated,” the group wrote. “If a teacher is not even able to hang a flag which represents that protection, what does that say to the LGBTQ students in that community?”

Last week, the board of the Newberg Oregon School District voted to ban Pride flags as well as any other “political” signs, clothing and other items. Conservative parents and ideologues are increasingly turning school boards into battlegrounds for political culture wars as they oppose LGBTQ-inclusivity and anti-racist education in classrooms.