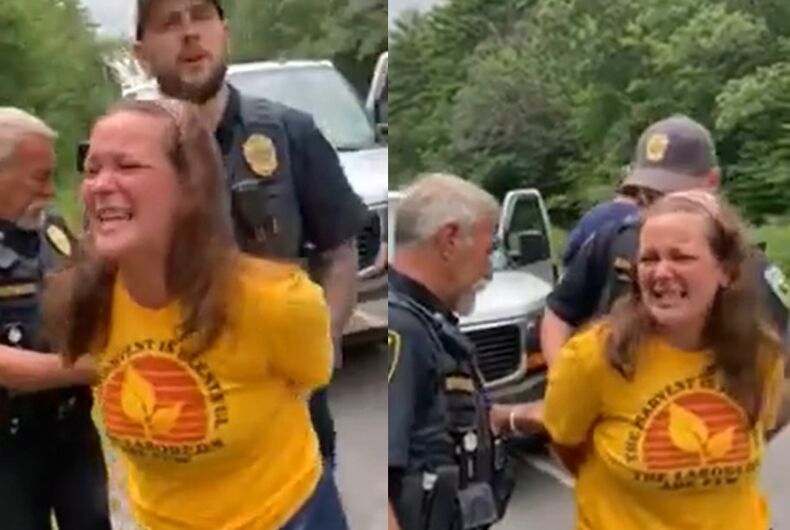 An anti-mask member of the Weare School Board in New Hampshire had a homophobic temper tantrum while she was being arrested.

“Fuck you, you faggots!” Rochelle Kelley, 33, screamed at the police officers as she was being arrested last month in video recorded by her husband Samuel Kelley.

Weare Police stopped the couple because of an expired inspection sticker and registration, according to Weare Police Chief Christopher Moore. They were issued citations and the car had to be towed.

But Moore said that the couple didn’t want to let police officers conduct an inventory of the contents of their car before it got towed.

Samuel started recording the arrest of his wife as she was screaming homophobic slurs like “faggot.”

“Eat shit, you cock-sucking dick,” Rochelle Kelley shouted at the cops as her husband condescendingly tells the officers that he did not give them “legal permission” to conduct the inventory.

Rochelle Kelley, less composed, shouted that she will “sue the shit out of you” before screaming at the top of her lungs about how the handcuffs are too tight and the police were “literally cutting off my fucking arm.”

Samuel Kelley posted the video online although it’s not clear why.

Weare school board member Rochelle Kelley is unhappy after being cited for a motor vehicle inspection violation. Next week, she goes on trial for criminal mischief & disorderly conduct after defying police orders to leave a Concord playground closed for Covid. #NHPolitics pic.twitter.com/lMUbHuvjU9

Moore said that the Kelleys already received a warning about their expired registration just four days before they were stopped again and the arrest happened.

Rochelle Kelley is also facing charges of criminal mischief and disorderly conduct in connection to another arrest last year where police say she refused to leave a playground that was closed as a COVID-19 precaution. She allegedly argued that it was her “constitutional right” to use the public playground before she was arrested that time.

The Concord Monitor reports that Rochelle Kelley is an outspoken opponent of mask mandates on the Weare School Board.