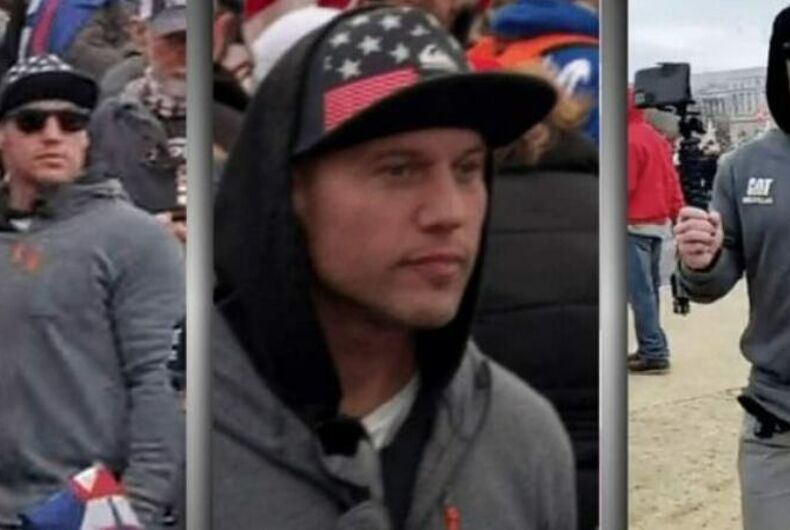 The Instagram thirst pics of a muscle-clad model led to his arrest after he was allegedly recorded assaulting a police officer during the January 6 riot at the U.S. Capitol.

Video footage from the riot allegedly showed Logan Barnhart pulling an officer down the Capitol steps before another rioter began to beat the officer with a flag pole.

Members of the “Sedition Hunters”, a community dedicated to identifying the January 6 rioters, began referring to Barnhart as “#CatSweat.” The nickname originated from January 6 images allegedly showing him wearing sunglasses and a sweatshirt branded by Caterpillar, a construction equipment manufacturer.

The Sedition Hunters eventually found a video that showed Barnhart without sunglasses attending former President Donald Trump’s “Stop the Steal” rally. The rally occurred hours before the Capitol riot began. The hunters then placed an image of Barnhart’s full face into a publicly available facial recognition website. The website allegedly matched his face to thirst images on Instagram, bodybuilding websites and photos from the covers of steamy romance novels.

The romance novels include such titles as Stepbrother UnSEALed: A Bad Boy Military Romance, Crash and Burn: A Sin and Tonic Novel and Lighter (which had the tagline: “Wrong never felt so right.”) The face match also found images of Barnhart’s shirtless, tattooed torso flexing in skimpy low-rise jeans and shorts.

However, it was Barnhart’s Instagram account that reportedly confirmed his identity. In addition to right-wing memes, he allegedly posted images of himself wearing the same American flag and Caterpillar-branded sweatshirt seen in images from the riots.

On August 4, a federal jury charged Barnhart with riot-related crimes. He appeared in court on Tuesday and was released on house arrest on a $5,000 bond.

A record number of out athletes are participating in the Paralympics