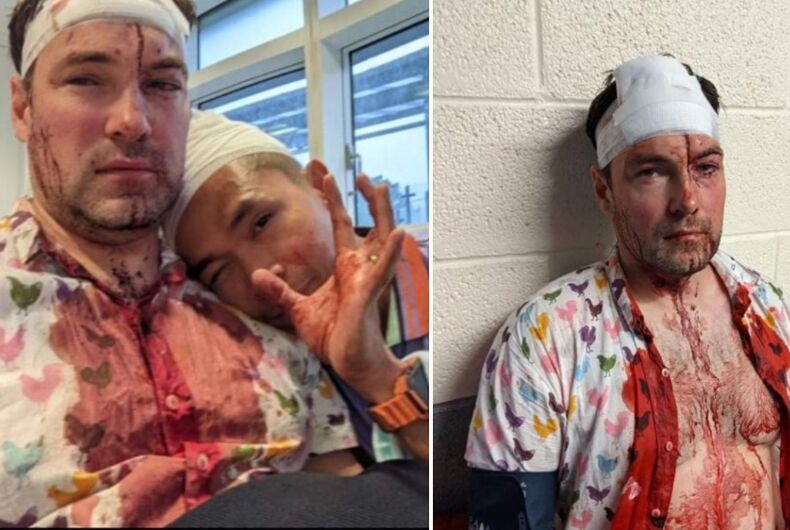 Rob and Patrick were celebrating with a friend when the gang attacked.Photo: Twitter/screenshot

A gay couple and their friend are recovering from concussions and several injuries in a hospital after they were attacked while leaving a gathering in Birmingham, England.

News of the attack has shocked several advocates and community members online and police are urgently seeking the public’s help in apprehending the assailants.

Related: Out Olympian needs surgery after getting caught in a melee that possibly left one dead

The incident took place before dawn on August 16, when Rob and Patrick were leaving their friend’s birthday and housewarming celebration at the Missing Bar. When they left, they encountered men in an SUV that were inhaling balloons, a practice commonly known as “hippy crack” in the United Kingdom.

Rob told I News, “I made a joke asking if it was their birthday, and then they said ‘what the fuck are you saying to me?’ My friend asked them to calm down then they started calling us faggots.”

That’s when the attack ensued. “My husband started filming them, so he had evidence of what they were saying to us. They stole his phone out of his hand. My friend is a tiny 50kg, and she tried to get the phone back.

“They knocked my husband unconscious and dragged my friend halfway down the street. She fell out, then hit her head,” Rob said.

The men took off in the SUV and Rob chased them. “I ran up to them, banged on the window,” he said, “then all four of them came out, and started hitting me with glass bottles.”

Rob tried “fending them off as much as I could,” but he was effectively outnumbered four-to-one.

“After my husband regained consciousness, he came to help me, but they started hitting him too. Before we knew it, they sped off.”

The result was all three receiving treatment for concussions, lacerations across their body, and stays in the Birmingham City Hospital.

Woke up today to these messages- Ron & Patrick were brutally attacked outside @MissingBarBrum last night. Another Day, another horrific homophobic attack on the #LGBTQI community. – These attacks are unfortunately becoming more & more frequent. 😡 pic.twitter.com/Pa1gJz531i

Rob reports that Patrick was “vomiting” at the hospital, alleviating concerns about the group having concussions.

“They did an X-ray on my hand, it’s quite badly cut. My friend didn’t have any broken bones, but she will be on crutches for the next fortnight,” Rob said.

Rob, describing himself as “still in shock,” added that “I need both hands to type at work, so I’ve been placed on three weeks leave until I recover,” and Patrick “is shaken by the whole thing.”

The married couple, who live over an hour’s drive away in Bicester, is dismayed by the entire ordeal. The gay village “should be a safe area to be who you want and not have to tolerate people yelling homophobic remarks at you,” Rob said to the BBC.

“I’m Canadian, and my husband is Filipino. We’ve lived in all over the world, from the Philippines and Singapore. We’ve never experienced anything like that,” he said. “I don’t know whose idea of a fun night out is trying to start a fight by yelling homophobic remarks at gay people outside a gay bar.”

Others across the United Kingdom are similarly shocked about the attack.

Andy Street, who is out and the mayor of the West Midlands — including the Birmingham metropolitan area — tweeted “There is no place in our home for this disgusting, homophobic behaviour. I’m sure the police will do all they can to catch the perpetrators and punish them with the full force of the law.”

“This was an absolutely appalling attack and robbery on people just trying to enjoy a night out in the city centre. They suffered homophobic abuse before being physically injured, and we are working incredibly hard to find those responsible,” West Midlands Police Inspector Steve Lloyd commented about the attack.

“We’ll be working closely with businesses in the area, and the Southside Business Improvement District (BID), to reassure them that we are taking this appalling hate crime very seriously.”

This is horrific. Sending our love and solidarity to Ron & Patrick. Thank you to @SouthsideDist safe space who took care of them after this awful, homophobic attack.

So shocking Linda. Please pass on my love and best wishes for Ron and Patrick's speedy recovery. Can't believe in 2021 we are still here at this juncture x

This is absolutely horrific! Sending love to both Ron & Patrick. 💜

Homophobia is alive & literally kicking! A third of all LGBT+ people have been victims of homophobic hate crime! Via @LindaRiley8 https://t.co/gcZXs4D5VF

Two gay men were brutally attacked outside Missing Bar in Birmingham last night. Ron and Patrick suffered multiple injuries, sending them love and solidarity. Something needs to be done about the rising level of violence against LGBTQ+ people in the UK, this can’t continue. pic.twitter.com/NRTWKn44ke

We are devastated to read about this homophobic attack in Birmingham. Our hearts go out to Rob and Patrick. An upsetting reminder of how much more we still have left to do for LGBTQ+ equality.https://t.co/uuCRcSafxw

The West Mids is a diverse, inclusive, and tolerant region – and there is no place in our home for this disgusting, homophobic behaviour. I’m sure the police will do all they can to catch the perpetrators and punish them with the full force of the law.https://t.co/N3x14MW5SX