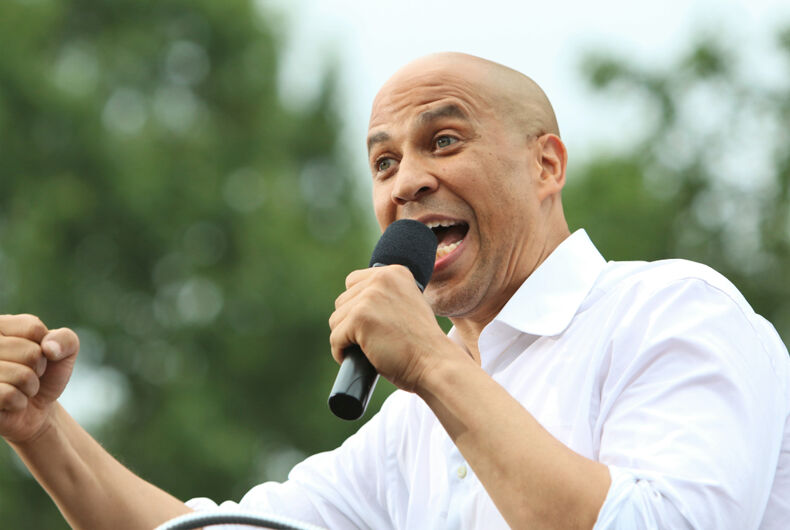 A Republican senator thought he could troll Democrats with a toothless resolution until Sen. Cory Booker (D-NJ) took a note from his cousin RuPaul and told his colleagues to “sashay” to vote for it. The whole plan blew up in the Republican’s face.

Sen. Tommy Tuberville (R-AL) – a former football coach who got Donald Trump’s support to run for the Senate last year and won – introduced a non-binding amendment to a spending bill last night. His amendment would call for an end to federal funding for cities that defund the police, but since it’s non-binding it wouldn’t actually cut funding for any cities.

“The far-left rally cry of defund the price is not just D.C. rhetoric, they’re actually acting on it,” he said.

Tuberville is one of the many Republicans and conservatives in the U.S. who thinks that Democratic Party leaders are secretly trying to defund the police, despite how Democrats voted to increase police funding this year while Republicans voted against it.

Fox News’s Peter Doocy brought up the talking point with White House Press Secretary Jen Psaki and was shot down when she said that President Joe Biden campaigned on increasing police funding and Congressional Democrats passed the American Rescue Plan Act of 2021, which provided funds for police departments, without any votes from Republican members of Congress.

So Sen. Booker was ready when Tuberville introduced his amendment.

“I am so excited!” he said, mocking Tuberville. “This is the highlight of this long and painful night. This is a gift. If it wasn’t a complete abdication of Senate procedures and esteem I would walk over there and hug my colleague from Alabama.”

He said that “there are some people that said that there are members of this political body that want to defund the police. My horror!” and thanked Tuberville for “giving us the gift of finally” being able “to put to bed this scurrilous accusation.”

“So, let’s all of us, 100 people, not walk, but sashay down there and vote for this amendment and put to rest the lies,” Booker said, possibly referencing his cousin RuPaul who uses the word “sashay” regularly on RuPaul’s Drag Race. Booker appeared on the show this past April.

“I am sure I will see no political ads attacking anybody here over defund the police,” he concluded.

"This is a gift," Cory Booker says in an animated speech praising Tommy Tuberville's non-binding amendment to punish localities that defund the police.

"I am sure I will see no political ads attacking anybody here over defund the police."

It passed 99-0, all Dems voted for it. pic.twitter.com/GUqAfcSlxH

The Senate voted for the amendment in a 99-0 vote, but Booker didn’t get his wish of that political attack ending. Almost immediately after the vote, Senate Minority Leader Mitch McConnel (R-KY) issued a press release entitled “Democrats Are Still The Party Of Defunding The Police.”

Sen. Tuberville has only been in the Senate for several months but he already has a history of opposing LGBTQ equality. In March he tried to add an amendment to the American Rescue Plan Act of 2021 – the same bill that gave local police departments funds that Republicans unanimously opposed – to punish school districts that allow transgender girls to participate in school sports. The amendment nearly passed.

He was also one of only 13 senators to oppose the confirmation of Transportation Secretary Pete Buttigieg, the first out LGBTQ Cabinet secretary.