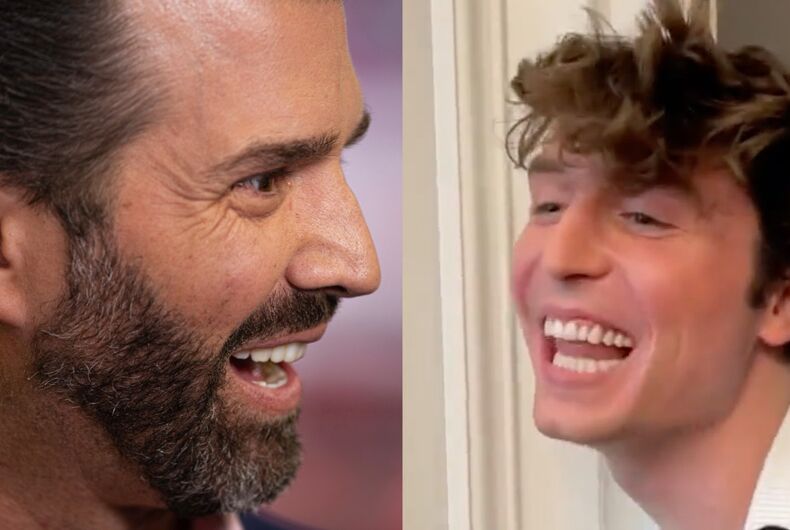 Conservatives are up in arms over a White House campaign to “get shots in the arms of every single American” with the help of Gen Z influencers and social media.

Skinner’s stereotype of a Gen Z incompetent intern is only one of many characters he portrays. Skinner’s skits have racked up hundreds of thousands of likes and shares and Vogue has declared his Kris Jenner impression as “spot on.”

So when the White House wanted to launch a social media campaign encouraging young people to get vaccinated against the coronavirus, Skinner was a natural choice. Toss in Jen Psaki and you have a perfect set up for the LGBTQ community too.

Kooper bumbles his way through the office, saying “hey” to the president and delivering coffee, during the skit – all while thoroughly annoying Psaki. His high fashion outfit and long painted nails make him a stand out as he storms the office causing chaos in his wake.

He books Psaki for a nail appointment and when she reminds him she didn’t ask for one, he tells her, “It’s called initiative.”

Apparently, the right didn’t get the joke. Or the point.

“Next they’re going to waterboard you till you get vaccinated,” Donald Trump Jr. tweeted while giving the video more exposure, “though there’s no way that would be worse than watching this!”

Others called Kooper “disgusting” or “an embarrassment to the United States.”

By the end of the skit, Kooper pulls his act together and gets on board the vaccine train, encouraging “shots in arms” along with Psaki. And despite conservative outrage, that’s exactly what Skinner will do with his quick comedy bit: get shots in arms.

Next they're going to waterboard you till you get vaccinated, though there's no way that would be worse than watching this!!! https://t.co/dliVqejHNF

An absolute DISGRACE. Fucking liberals embarrassing the USA. Disgusting. @POTUS is the biggest laughing stock by the world. https://t.co/3nx41U9Xhf

Not really sure who Cooper the Gender-Fluid Intern is supposed to appeal to, the minority/Hispanic groups that have the lowest vaccination rates probably aren't big fans either.

A fucking embarrassment to the United States of America.

This entire administration is a fucking embarrassment to this nation.

Our enemies are salivating and too many of you morons think this is cute and funny. pic.twitter.com/1MxaKLBdZn

On behalf of the gays…I'm sorry. Jerry Falwell was right. https://t.co/B7PrppvwdO

The White House hired another influencer to promote vaccines pic.twitter.com/LK7JOOcGz1

lol at ppl being triggered by Benny Drama. I’m obsessed with him https://t.co/8f0BsFOmgo

Marjorie Taylor Greene is seething. Trans kids can use Twitter but she’s been banned.