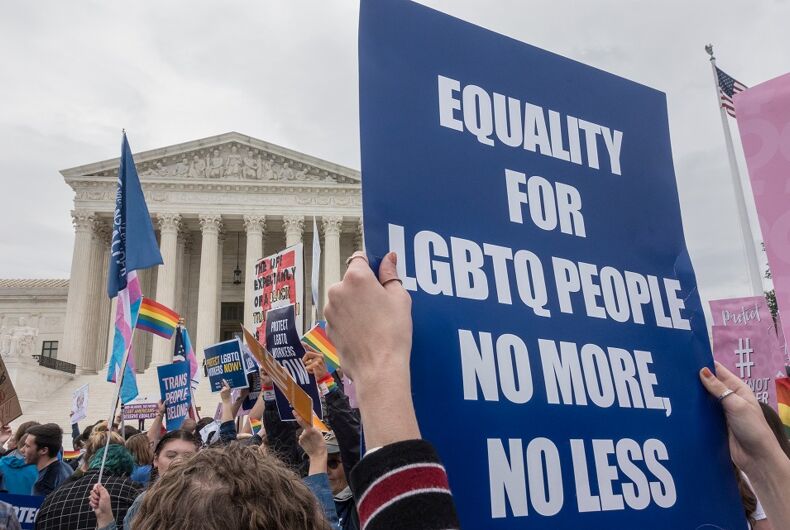 A coalition of 20 states led by Tennessee sued the Biden administration yesterday because it said it will protect the rights of transgender students to get an education free from discrimination.

The administration has “misconstrued the Supreme Court’s Bostock decision by claiming its prohibition of discrimination applies to locker rooms, showers, and bathrooms under Title IX and Title VII and biological men who identify as women competing in women’s sports,” said Tennessee Attorney General Herbert Slatery III (R) in a statement.

The other executive order applied that reasoning to Title IX (the 1972 law that bans discrimination in education “on the basis of sex”) saying that discriminating against LGBTQ students – like banning trans girls from schools sports – is an illegal form of discrimination.

This has put the Biden administration on a collision course with Republican-led states. Over a hundred anti-LGBTQ bills – mostly targeting transgender youth – were introduced in state legislatures this year, and several passed. Many specifically attacked transgender students who want to play school sports, and the Biden administration has already shown that it’s willing to participate in litigation to protect trans youth.

Slatery and the other attorneys general argue that the Biden administration changed the law, that Bostock is specifically about employment practices and has nothing to do with “locker rooms, showers, and bathrooms under Title IX and Title VII and biological men who identify as women competing in women’s sports.”

The states are suing the Equal Employment Opportunity Commission (EEOC) and the Department of Education (DOE). They say that the DOE issued unauthorized guidance to schools telling them that they can’t discriminate against trans students and that the EEOC went beyond its mandate when it issued guidance that said it’s discrimination to prevent a transgender employee from using the restroom of their gender or to force them to follow the dress code of their sex assigned at birth.

The lawsuit says that now these 20 states can be sued if people use the reasoning put forth by the EEOC and DOE because they have laws that discriminate against LGBTQ people. Like the Biden administration’s participation in lawsuits in West Virginia and Arkansas that are challenging anti-trans laws, this lawsuit is asking the court to resolve the incompatible policy goals of Republican state lawmakers and the Democratic White House.

But while Slatery complains about “the threat of withholding educational funding in the midst of a pandemic,” his state was spending the pandemic attacking transgender people. Tennessee passed laws banning transgender girls from participating in school sports, allowing cisgender students to sue if they see a trans student in the restroom, and requiring businesses to post signs outside of restrooms if transgender people are allowed to use them, in just the first few months of this year.

The complaint was filed with the U.S. District Court for the Eastern District of Tennessee and it doesn’t get into much detail about why the 20 states want to keep their discriminatory laws, other than constantly referring to transgender girls as “biological men” and stating that the issue is “localized.” The arguments focus on process, saying that the EEOC and DOE don’t have the authority to interpret Bostock as banning anti-LGBTQ discrimination.

The Supreme Court earlier this year refused to take an appeal in Gavin Grimm’s lawsuit against his former school district. He was banned from using the boys’ restroom and forced to use a supply closet as a restroom, which led to harassment and discrimination and a urinary tract infection.

After years of litigation, the Fourth Circuit Court of Appeals sided with Grimm and said that he faced illegal discrimination under Title IX. In refusing to hear the school district’s appeal, the Supreme Court effectively let Grimm’s historic victory for transgender rights stand.

But the Supreme Court may have had other reasons to refuse to hear that specific appeal and its six-to-three conservative majority could decide otherwise if the Tennessee lawsuit makes it there.