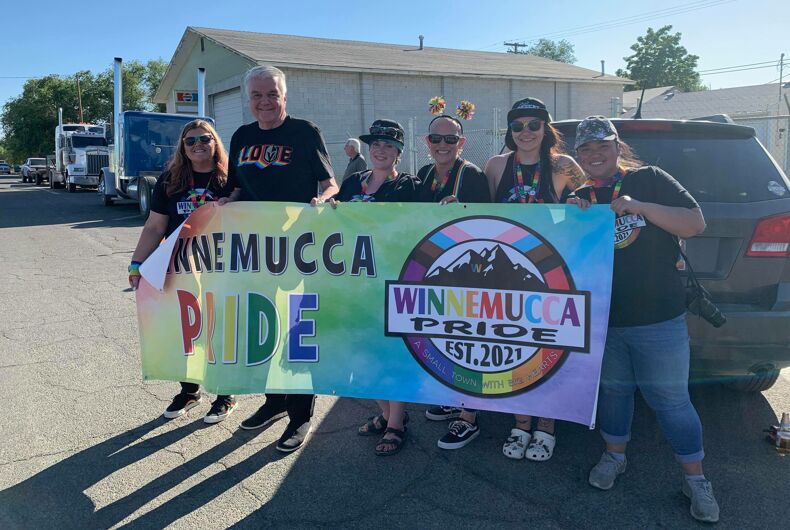 Winnemucca, Nevada, is known by many as the childhood home of a fictional character in Armistead Maupin’s Tales of the City series of novels, trans landlady Anna Madrigal, born the son of a brothel owner known as Mother Mucca.

Johnny Cash sang about it as the ultimate out-of-the-way location – “I was totin’ my pack along the dusty Winnemucca road” — in I’ve Been Everywhere.

But this month it gained new recognition as a small town that has as much Pride as any big city – and wants the world to know it.

Nevada Governor Steve Sisolak was among approximately 300 people who marched or rode in the parade that kicked off the celebrations on July 16 and 17.

The Winnemucca LGBTQ+ Pride Festival was the brainstorm of town resident Shawn Anne Dixon, an out lesbian who initially envisioned a small group of people walking down Melarkey Street waving a Pride flag.

With the help of her daughter Kat and friends Christina Boyd Basso and Misty Huff and others, it grew into a much larger affair that proved residents in small towns such as Winnemucca, with fewer than 8,000 residents, can mount a Pride celebration every bit as meaningful and well-supported as their urban counterparts.

“In Nevada, #PrideMonth is not only 30 days in June, as we remain committed to equality and we will continue to celebrate & recognize the impact that lesbian, gay, bisexual, & transgender individuals have had & will continue to have on our State & nation. #winnemuccapride,” Sisolak tweeted after the parade.

Riding on the Grand Marshal’s float in the parade, wearing a black t-shirt reading LOVE and waving a mini-rainbow flag, Sisolak stayed around in the 90-degree heat to pose for photos and chat with event organizers and participants.

“As Governor of Nevada, I will do everything I can to ensure we will always be a welcoming State for all walks of life,” he vowed on Twitter. “Our diversity will continue to be our strength in this State!”

Today, I had the honor of attending the inaugural Winnemucca Pride Parade! Thank you to @WinnemuccaPride for organizing this important event! #winnemuccapride #PrideIsMoreThanAMonth pic.twitter.com/p7cQL9Qd2O

The event started on Friday with the Pride parade, which drew cheering onlookers lining the street. “Love is love, it’s that simple,” read a multi-colored message painted on a white truck in the parade.

Dixon said she was bowled over by the turnout and the support.

“I haven’t stopped crying, honestly, all day,” she told the Independent. “I didn’t expect the amount of community within Winnemucca that we’ve gotten. And that makes me emotional because it makes me feel like there’s so much more hope than I ever thought.”

One of the most enthusiastic participants was Steven Romero, a 15-year-old who came with his mother from rural Elko, Nevada, two hours away. He marched in the Pride parade on Friday and performed in drag for the first time on Saturday night, as Olympia West Rose.

Romero told the Independent that he came to celebrate his sexual identity, something he couldn’t do in his hometown, and realize his dream of performing for others.

“This is so so so amazing and I’m so proud to be part of the community and being able to express myself,” he wrote on Facebook. “Winnemucca Pride 2021 hosted my first ever drag performance and I am forever grateful…This means so much to me and being able to perform is astonishing especially at the very first Pride event in Winnemucca. I can’t wait to possibly do this again next year!”

Another participant was Stephanie Sims, a Winnemucca resident who told the Independent she is a transgender woman and this was her first Pride event. “It was on my bucket list to make at least one Pride before I die,” she said. “And I’m 69 years old. So this is just wonderful. I can’t believe it.”

David Smith and Michael Melvin, a married couple, read about the event online. They said they drove 1,600 miles from Arkansas to show their support and meet a friend, who came from Montana.

Lexi Vaughan and Emma Ricker, a young couple, watched the parade from the sidelines and said it was their first Pride event.

“It’s so awesome seeing representation for us out here because, like, it’s still Winnemucca and people are like, ‘Oh, we’re a red town,’ and then they say some really harsh stuff,” Ricker told the publication. “It’s really cool just seeing everything out here for once, and not feeling like we’re not part of the world. “

The organizers posted on Facebook that they’re starting to line up sponsors for next year’s Winnemucca Pride celebration and plan to spread the word by attending the Northern Nevada Pride Festival and Community Parade this weekend in Reno.

“We intend on this being a yearly event!” Basso said.

I was especially touched by Shawn Dixon, who despite receiving a cancer diagnosis in March 2020, was able to accomplish her dreams of organizing this year’s parade to help celebrate the #LGBTQ community in Winnemucca. https://t.co/nv64zqDxva #winnemuccapride pic.twitter.com/6aKVj3E1YA

As Governor of Nevada, I will do everything I can to ensure we will always be a welcoming State for folks of all walks of life – Our diversity will continue to be our strength in this State! #winnemuccapride pic.twitter.com/r5FluaDhLs

Now Christians are attacking Eli Lilly for being too diverse