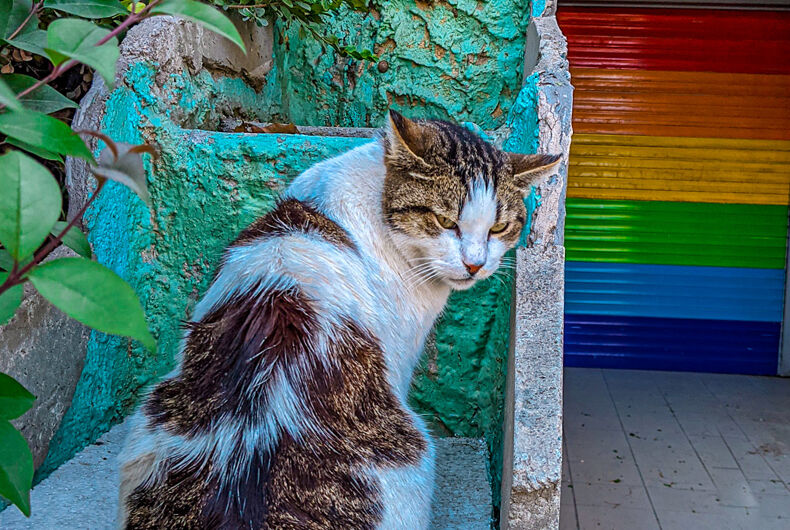 Istanbul, Turkey, where we’re currently living, is a city of remarkable beauty. The stunning mosques and their slender minarets soaring overhead. The shops filled with bejeweled lamps and mounds of colorful Turkish delight.

Related: Judi Dench criticized for saying her character in “Cats” is transgender

In fact, the city is famous for its many – many! – stray cats. They’re literally everywhere, peering down from fence posts and lounging on stairclimbs.

People do keep cats as pets, but the ones you see outdoors are almost invariably strays.

And the most beautiful thing in this magical city may be the locals’ unique relationship with these felines. We’ve never seen anything quite like it.

On one hand, the Istanbullular – the fantastic word for people who live in Istanbul – clearly loves these animals. Throughout the city, they leave out bowls of water and containers of food. Or they simply put out scraps of food, often from their own meals.

They also build “cat houses,” which are everywhere: parks, alleys, vacant lots, and tucked under stairwells. Some are simple affairs, plastic containers or cardboard boxes.

But others are very elaborate, constructed of wood. We’ve seen entire cat condominiums, which the cats love because it gives them a place to sleep and also a vantage point from which to view the passing world.

In fact, cats are given almost complete free reign in this city of 15 million humans. They go wherever they want, flopping down in the middle of sidewalks and plazas where people have learned to simply step around them.

Cats are also allowed inside buildings, even cafés and restaurants, where they often occupy chairs – and once again, no one dares disturb them. In stores, the unwritten rule is that you never disturb a cat, even if it’s sitting on the merchandise!

Once, we even saw a rug merchant place a tiny rug over a sleeping cat.

They even wander into mosques in the middle of prayers.

This all seems oddly selfless on the part of the Turks. After all, these aren’t cats that will purr in your lap or curl up in bed with you.

Yes, occasionally you’ll see a Turk stop to pet a stray cat – though tourists are far more likely to do such a thing. And, yes, if you’re sitting on a bench, a cat might approach, purring as it wends its way between your legs.

But for the most part, humans do all these things for the cats, and the animals largely ignore them. Or sit and judge them in that uniquely feline way.

This couldn’t seem more different than the relationship Americans have with their pets.

In America, we have Dog Dads and Cat Moms. People consider cats and dogs to be members of their families. They buy them treats and Christmas gifts, talk to them, and constantly lavish attention and affection.

And in exchange, Americans expect companionship and affection back from their charges, if not slavish devotion.

The relationship is undeniable quid pro quo: You follow my rules, adore me – or at least purr on my lap – and I’ll keep taking care of you.

So why such selfless behavior on the part of the Istanbullular?

It began as a question of religion.

Cats are understandably admired for being very clean animals, even “ritually clean,” as outlined in the Quran. Muhammad, the founder of Islam, was said to be very fond of cats. In fact, according to one story, he cut off the sleeve of his shirt rather than disturb the cat sleeping on it.

Islam also commands that people treat all living creatures with respect. (We’d argue that many Muslims, like many Christians, should treat LGBTQ people with more respect, but that’s the subject of another column.)

However, the relationship between the Istanbullar and these cats seems like it’s based on more than just religious obligation. It feels as much about kindness, decency, and doing the right thing simply because it is the right thing.

That’s part of what makes it so beautiful.

What of Istanbul’s stray dogs? In fact, in Islam dogs are considered dirty – perhaps accurately, at least compared to cats – and possibly even “impure.” But because of Islam’s teachings, the city still takes good care of its some hundred thousand stray canines.

Dogs definitely aren’t allowed inside cafes, shops, or mosques – perish the thought! – and no one ever builds houses for them. But they’re given medical care and even shelter when it’s especially cold. People also provide them with plenty of scraps to eat.

The truth is, the dogs all seem kind of sad, glumly sleeping their lonely lives away in the parks and alleys, as if they recognize their obviously inferior status compared to the city’s cats. But at least they’re rarely abused.

We’re visitors here in Turkey, and as in all the places we travel, we try to reserve judgment as much as possible, trying to understand local customs and meet people where they are.

But we absolutely see great beauty in the relationship between Istanbullular and their cats.

We could all stand to be that selfless.