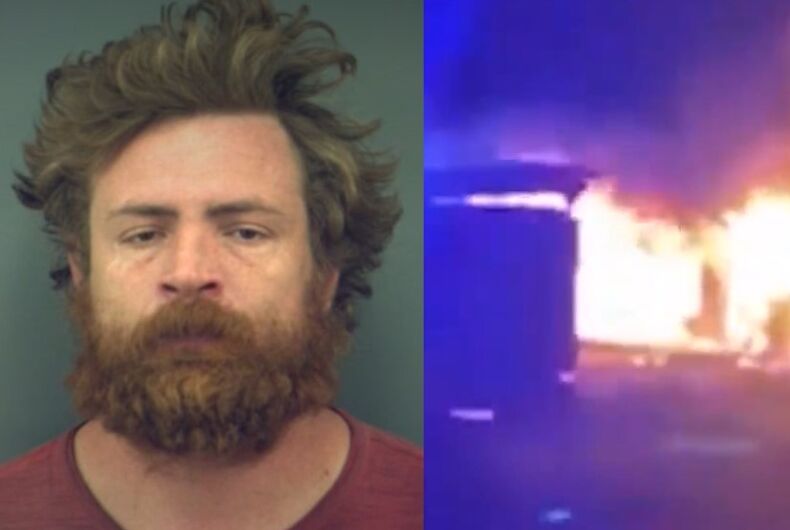 A Texas man was arrested for allegedly setting fire to the house his brother and mother lived in because they were living “evil” lives. The mother is in critical condition and the brother died due to severe burns.

Philip Daniel Mills, 40, of El Paso is accused of setting fire to a house with the intention of killing his mother and brother this past Thursday at 11:30 p.m. because they didn’t follow the Bible.

“He intentionally broke the television located in the living room because he needed to ‘purge the home from evil,’” a police affidavit says Mills said. “The defendant states that he left the residence and allowed his mother to be in a ‘happy place’ throughout the day and waited for both his mother and brother to go to bed, before starting the fire.”

Officers told Mills while questioning him that his brother is dead and his mother had been hospitalized.

“The defendant then laughed and advised the investigators that he was shocked that both his mother and brother did not perish and called it a ‘failed attempt.'”

Neighbors said that Mills was acting strangely that day and that he was always “troublesome” and frequently left town.

“He was bad news, all he would do was sit out there and drink and smoke and I noticed he was back to his old routine,” neighbor Roger Torres told KTSM 9.

He left the house so that his mother and brother would be in a “happy place” for that day and then came back after they had gone to bed to set the house on fire.

El Paso Police say that Mills said he poured gasoline from a weed eater on the living room sofa and then lit a cloth on fire.

“Once the sofa caught on fire, he walked outside the house and waited to see if his mother or brother would go outside but they didn’t,” the affidavit says. “The defendant advised that he waited outside the residence with large rocks in his hands in the event that both his brother and mother had made it out the burning residence.”

By the time firefighters arrived, it was too late for Paul Aaron Mills, 54, the brother. They pulled him from the living room and took him to the hospital where he was pronounced dead.

Florence Annette Mills, 82, was found by firefighters walking out of the house with burns. She was taken to a hospital and is in critical condition.

“When we found out only two were transported we thought ‘What happened to the other brother’ – there were three –  so I thought, in my opinion, he had something to do with it,” Torres, the neighbor, said about that night.

Mills was found running around the neighborhood, according to police. He told officers that his office was on fire. He was later arrested when police obtained a warrant for charges of capital murder and arson.

Mills had an extensive criminal record, according to El Paso Police, which included criminal trespass and evading arrest. Torres said that Mills’s family had called the police on him before because “he stripped naked and he was drinking.”