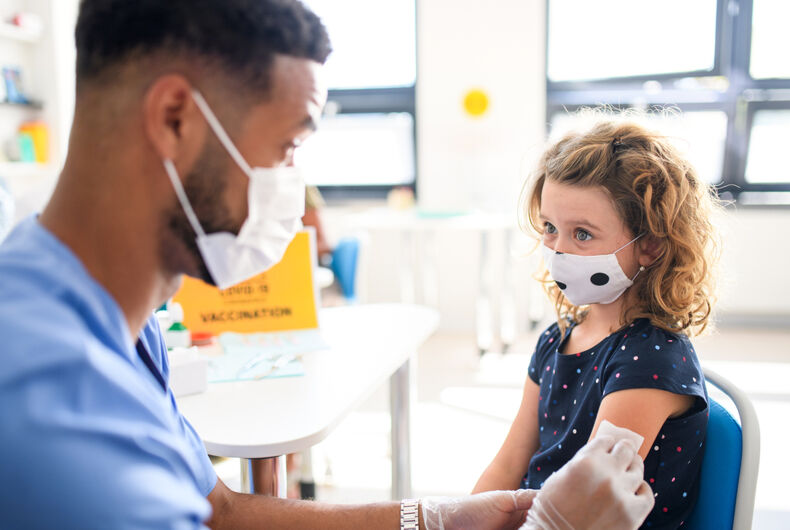 The Tennessee Department of Health (TDH) is halting vaccine outreach programs – not just for COVID, but for all vaccines – for minors after facing criticism and threats of funding cuts from Republican officials in the state who accused them of “targeting our youth” with “reprehensible” social media posts about getting vaccinations.

The move comes after the state passed several laws targeting LGBTQ youth that were justified by arguments about protecting straight and cis young people from LGBTQ people, with Republican lawmakers using much of the same language to advance both positions.

Related: Businesses will now be forced to post signs announcing they serve transgender customers in Tennessee

According to an internal email sent Monday and obtained by The Tennesseean, TDH will stop holding COVID-19 vaccine events in schools and will also stop sending postcards to minors to remind them to get vaccinated because, officials at the DOH say, that could be “potentially interpreted as solicitation to minors.”

“Solicitation of minors” usually refers to sexual abuse of children.

Another email from TDH Chief Medical Officer Dr. Tim Jones told staff that there will be “no proactive outreach regarding routine vaccines” and “no outreach whatsoever regarding the HPV vaccine.”

Jones told staff not to plan to do any events at schools for the flu vaccine and to not send any information about “back-to-school” vaccinations to parents. He said that the Tennessee Department of Education would be handling that this year.

“Any kinds of informational sheets or other materials that we make available for dissemination should have the TDH logo removed,” he wrote.

CEO of Neighborhood Health Brian Haile said that the move could “really limit access to vaccines in rural areas” because school gyms are often the only air conditioned building in an area that is large enough to work as a vaccine center.

While TDH wouldn’t confirm the emails, a spokesperson said that there is “an intense national conversation that is affecting how many families evaluate vaccinations in general.”

TDH appears to be afraid of funding cuts from anti-vaccine Republican lawmakers. The emails come after Dr. Michelle Fiscus, medical director for vaccine-preventable diseases and immunization programs at TDH, was fired without explanation yesterday.

Fiscus said in a statement that she was fired because she provided “evidence-based education and vaccine access so that Tennesseans could protect themselves against COVID-19.”

State Rep. Scott Cepicky (R) is one of the state lawmakers who has been critical of vaccinating children. He recently called TDH’s outreach efforts “reprehensible.”

“The Department of Health is targeting our youth,” he said at a state House hearing in June. He has also suggested dissolving TDH.

“When you have advertisements like this, with a young girl with a patch on her arm all smiling, we know how impressionable our young people are.”

Other lawmakers accused TDH officials of violating parents’ rights by advertising vaccines directly to children and using “peer pressure” to get teens vaccinated. After the hearing, social media posts from TDH that promoted vaccination to young people were quietly removed.

The language is similar to what state Republican lawmakers used to pass a bill earlier this year requiring schools to notify parents if sexual orientation or gender identity are going to be mentioned in class 30 days in advance and gives parents the ability to opt their children out so that they don’t have to hear that LGBTQ people exist.

“As a parent, I find out when my child comes home what video they saw that day, not 30 days before so I can protect my own child from that,” Tennessee Rep. Ryan Williams (R) said at the time. “Our kids are young and impressionable, and what we allow in their minds is important.”

Another bill passed earlier this year allows parents in Tennessee to sue their schools if their kid encounters a transgender student in the restroom and yet another banned some trans youth from accessing gender-affirming medical care. Tennessee passed another bill banning transgender girls from participating in school sports this year.

But while Tennessee Republicans stand solidly opposed to LGBTQ rights – despite a lack of evidence that LGBTQ rights hurt children – they can’t get the same level of consensus in favor of vaccines.

“Public health officials in Tennessee should be encouraging teenagers to get vaccinated, not capitulating to anti-vaxxers,” she tweeted. “Teens who don’t get vaccinated against #COVID-19 are at greater risk of hospitalization, death, long-haul COVID.”

This is so disturbing. Public health officials in Tennessee should be encouraging teenagers to get vaccinated, not capitulating to anti-vaxxers. Teens who don’t get vaccinated against #covid19 are at greater risk of hospitalization, death, long-haul covid. https://t.co/UxT3O99ogt

Paulette Aniskoff, former Director of the Office of Public Engagement at the Obama White House, put it more succinctly: “Killing the kids to own the libs.”

Killing the kids to own the libs. #Tennessee https://t.co/UfhGSPrWbD

Only 35% of Tennesseeans are fully vaccinated against COVID-19, well below the national average.