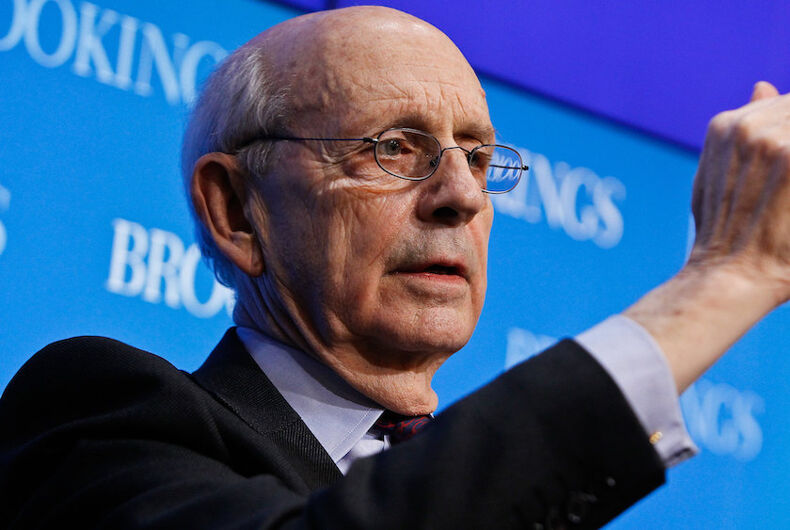 One of the enduring legacies — and tragedies — of the Trump presidency is the formation of a Supreme Court where the far-right is in the majority. Trump got to appoint three justices to the Court, and each was more conservative than the last.

The first, Neil Gorsuch, did show sign of independent thinking in a landmark decision protecting LGBTQ employees, but he also seems poised to grant broad religious liberty exemptions that would gut those very protections. Brett Kavanaugh and Amy Coney Barrett, on the other hand, are both reliably marching in lockstep to achieve the wish list of the Federalist Society, the anti-LGBTQ group that has been setting the agenda for the conservative takeover of the judiciary for years.

Against this backdrop, it’s critical to ensure the small group of liberals on the Court, currently just three, doesn’t get any smaller. With Democrats facing the possibility that Republicans will regain the Senate in next year’s elections, their chance to get a Biden nominee approved is shrinking.

Unfortunately, the oldest liberal justice on the Court, Stephen Breyer, doesn’t seem to be in any hurry to step down. At 82 (soon to be 83), Breyer has been on the nation’s top bench for 27 years. He is the oldest member of the Court by about a decade, having taken over the age title with the death of Ruth Bader Ginsburg last year.

In terms of succession, Ginsburg’s is the example that liberals most fear. As much as she was lionized by liberals, Ginsburg took a gamble on sticking around because she liked the job. Despite multiple health issues, Ginsburg did not retire during the Obama years, apparently assuming that Hillary Clinton would win the presidency.

Instead of having her seat filled by someone who would follow in her footsteps, Ginsburg left it open for Trump to select Barrett, who is running as far away in the opposite direction as she can get.

It’s impossible to determine the exact mix of principle, work satisfaction and vanity that goes into anyone’s decision to postpone retirement indefinitely. That certainly applies not only to Breyer, but also to the Democrats’ superannuated Congressional leadership.

While no one should be trafficking in ageism, the broader question about when one should retire is really about preserving the future. That’s especially true for Breyer. If Republicans win the Senate next year, there’s a good chance that they will simply refuse to appoint any Biden appointee to the Court.

Senate Minority Leader Mitch McConnell (R-KY) has already said he wouldn’t allow a vote on a Biden nominee in 2024.

As Majority Leader, McConnell was the one who also blocked Obama’s choice of Merrick Garland to replace Antonin Scalia in early 2016. He’s also the man who pushed through Barrett’s nomination in just one month right before the 2020 election.

McConnell’s hypocrisy highlights the real issue. Like Breyer, Democrats still reside in a universe where decisions are based on reason and principle. Republicans live in a universe where the only thing that matters is power. They would salivate at the prospect of a Supreme Court with a 7-2 tilt in their favor for years to come.

That’s long proven true of how Republicans view the courts. They have made a point of packing the judiciary with nakedly political appointees whose commitment to the law is secondary to their commitment to conservative power.

Why Breyer would be willing to risk further cementing the right’s control over the Supreme Court  is anyone’s guess. Breyer’s seniority has given him a larger role in major decisions, which he seems to enjoy, but he also seems to have a view of the Court that is frozen in time.

In a speech at Harvard last April, Breyer expressed the belief that the Court is still above politics.  “If the public believes to the contrary, if they think we’re just politicians, we should not be surprised if political parties, too, see in the nomination of a judge an opportunity to extend their political influence,” he said.

The obvious rejoinder is, ‘where have you been the past 20 years?’ That viewpoint is, to put it charitably, laughably Pollyanna-ish.

The pressure keeps mounting on Breyer to step down while the Democrats can replace him. Sen. Amy Klobuchar (D-MN) said today that if Breyer is thinking of retiring, he should do it “sooner rather than later.”

If Breyer is concerned about his legacy, that would be the case. But maybe he just likes his work too much to give it up.

Unfortunately for the rest of us, that means we’re at risk of ensuring that the Court will be hostile territory for us for decades to come.

Christian organization attacks fast food for being too pro-LGBTQ