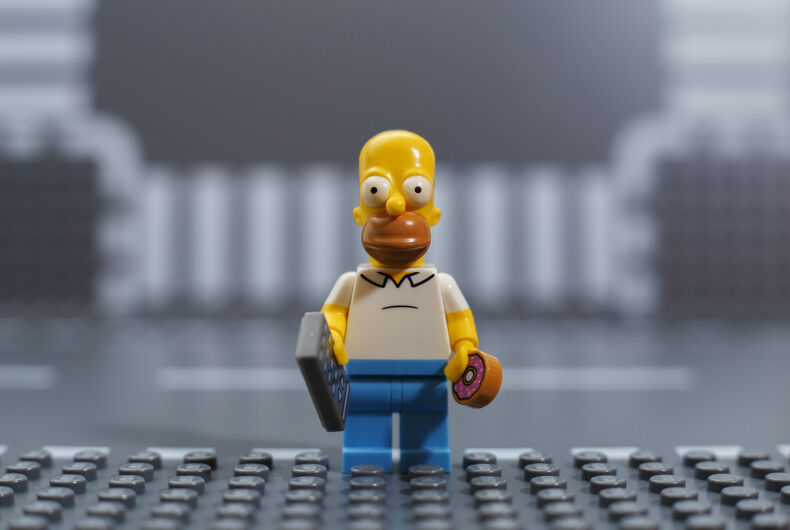 25 years ago this month, I was on the short end of a hate crime. Now, the mere fact that I’m writing this should tell you that I survived.  In fact, I avoided physical harm entirely.

And, honestly, there wasn’t a lot of harm mentally.  I went into the evening knowing that I could end up on the short end of some nastiness just for being me and I woke up the next morning knowing the same thing. In between?

Related: Are you a “Homer-sexual”? Here’s nearly all of the queer jokes from “The Simpsons” ever.

Yes, there was an instant when I was afraid that my number might have been up, but at the end of the evening, I actually had a good laugh.

And it was an evening that began well away from the heart of Swingin’ London.  I took the tube northwest to Wembley Stadium.  Why?  Just to get a glimpse of one of the world’s legendary sports and concert venues.

And although I wouldn’t attend the concert because I had other plans for later in the evening, on that night in July, Wembley was playing host to Tina Turner.

After I bought a bootleg t-shirt (which I’ve still got, by the way) and headed back into the heart of London, it was time to get ready for a night on the town.  A Brit acquaintance I’d gotten to know via America Online was going to show me a legendary venue of a different sort: the Way Out Club.

I’m not certain how ‘way out’ it truly is, but it is definitely a trans club…. and a club for trans chasers.

One, in particular, is the star of this story.  I’ve always called him Homer.  Was it his name?  Probably not.  But picture, if you will, Homer Simpson with slightly more hair and, in place of the de rigueur cheap white short sleeve shirt, a cheap dingy off-earthtone short sleeve shirt.

This should go without saying, but he was also thoroughly drunk.

At some point his attention turned to me and my friend – who suggested we humor him by at least being nice to him. Not what I would have done, but I was a guest in her country, so I humored her and played along.

I don’t recall precisely when we got shed of him, but it wasn’t before he stumbled around the dance floor in our general vicinity – during which several songs played, one being Blur’s “Parklife,” a truly odd song with not a lot of true singing but which overflows with a driving, repetitive-yet-not-monotonous guitar riff.

It was the first time I’d ever heard the song.  It instantly found a special place in my psyche.  I’ll always associate it with my (thus far) one night on the town in England – and with something else.

Even with “Homer” ruining the ambiance, I felt an odd sense of personal fulfillment.  As recently as four years earlier, I’d never been farther from my hometown of Houston than Atlanta (once) and New Mexico (a handful of times).  But thanks to what was still the early days of the internet, I’d found a trans community and met a member of it who, on an otherwise uneventful night in July, was showing me around a trans club in one of the largest cities in Europe.

Eventually, it was time to head out – my friend back to her home and me back to the George Hotel, near St. Pancras Station.

My friend had arranged for a taxi well ahead of time, so we were outside the club waiting for its arrival… when something else arrived.

An opposite-sex, presumably cis couple was walking by.  The man decided to inquire as to whether my friend and I were trans.  We ignored him – which enraged him more and more with each comment that did not provoke us into engaging with him.

As this went on, more and more patrons were filtering out of the club and onto the plaza where this show was transpiring.  Some did engage with the guy – telling him to leave us alone.

That enraged him more.

At one point, someone said something to him that prodded him to utter the magic phrase that, when uttered, tells everyone that you’re nobody.

“Do you know who I am?!?!?” he inquired repeatedly in a tone indicating that he genuinely believed at least someone there should have been able to provide him with the answer he desired.

He was young and physically fit – prompting me to presume he might have been some low-level pro soccer player (third-string Fulham, perhaps?)

The Euro Cup was over and the Premiere League season had yet to begin, so…him being a soccer-slummer didn’t seem a wholly unreasonable possibility.  In retrospect, however, I’m guessing not; if he was someone of note, then my friend who was a soccer aficionado likely would have recognized him.

After one particularly belligerent intonation of his question, the LGBTQ crowd seemingly parted; as much as I dislike relying on biblical imagery, the parting easily could have been part of a certain Cecil B. DeMille movie.

From the parted crowd, a single figure emerged.

Striding confidently toward the center of the scene, he responded – still drunk yet with more coherency than anything he’d uttered inside the club.

“Well, do you know who I am???” Homer queried rhetorically.  “I am the president of the United States! And I demand that you unhand these ladies!”

If anything was sure to push Mr. Basher over the edge, I was sure that would be it.  I instantly envisioned that a melee was about to ensue that, at best, would land me in jail – and at worst in the morgue.

But in that same incident, our cab arrived.

Instantly we were inside as it sped off into what was, by then, the early dawn hours.

It fell to me to break the silence.

“I am the president of the United States!”, I intentionally slurred – albeit in more of a Foster Brooks motif than Euro-Homer.

It was the closest I’ve ever come to being bashed – and I hope I never come closer.

And I confess… I still chuckle about it a quarter-century later.