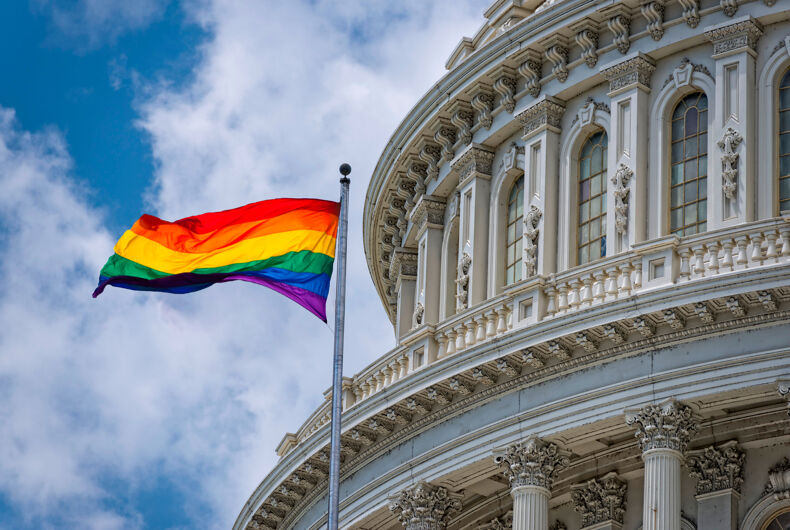 When asked which city in the United States has the highest percentage of LGBTQ+ citizens, most would likely guess San Francisco, home of the Castro District, or perhaps West Hollywood in Los Angeles.

But the nation’s capital actually wins the title — some 10 percent of Washington, D.C.’s 700,000 residents are part of the LGBTQ community. For those of us who call D.C. home, it’s infuriating that Congress has complete control over our local laws, as we have no actual Congressional representation.

Related: Which LGBTQ person would you ask to write our Declaration of Independence?

Lack of control over our city’s finances and laws has had real consequences for the LGBTQ community. In 1981, the D.C. Council tried to repeal the District’s sodomy law, a law that criminalized private, consensual oral sex between same-sex couples. But a Republican Congressman from Illinois who sought to score political points at home and blocked the repeal. The sodomy law remained on the books for another decade.

Ten years later, the D.C. Council enacted a needle exchange program to limit the proliferation of HIV, which was at its highest across the nation. For almost ten years after that, Congress blocked the District from using our own tax dollars for syringe access. Congress finally lifted the ban in 2008. Within one year, the rate of new HIV infections dropped by about 70 percent.

Things are hardly better in the present day, 40 years from the attempted repeal of the sodomy law. Sen. Mike Lee (R-UT) and Rep. Nancy Mace (R-SC) decided to intervene in our local vaccine rollout and child care center regulations just a few months ago. Before that, the inability for district leaders to respond while a group of far-right demonstrators stormed the U.S. Capitol in an insurrection, invariably demonstrated how powerless and vulnerable D.C. residents truly are.

Simply put, D.C.’s lack of statehood directly translates to the voter suppression of 700,000 residents, who are subjugated to the political whims of members of Congress from states around the country who they do not choose, whose leadership they cannot rebuff.

It is simply not right that Washingtonians are denied equal representation in the very city that boasts the strength of American democracy. Washington is filled with monuments dedicated to the Founders of our republic, and memorials honoring generations who died defending it.

For the large non-white population, this suppression translates most effectively as racial injustice. Over 63 percent of D.C. residents identify as people of color—including 46 percent Black residents. D.C. statehood is long considered an issue deeply rooted in civil rights and the fight for racial equity and justice.

The urgency of D.C. statehood grows every day as members of Congress actively exploit their outsized authority over district law — given to them by the Home Rule Act, which allows Congress to review all legislation passed by the D.C. Council. Republicans misuse this authority to advance their own political agendas, over the will, and to the detriment of, D.C. residents — especially their LGBTQ residents.

The LGBTQ community has a big tent, so a lot of issues demand our attention, especially during Pride Month. As Pride season ends, though, D.C. statehood remains a critical voting rights, racial justice, and LGBTQ equality issue that must continue to be front and center of the Democratic party agenda.

President Biden, Vice President Harris, and 46 Senators of 100 have stated their clear support for D.C. statehood — now is the time to end this stain on our democracy and finally grant full autonomy to D.C. residents.

Valerie Ploumpis is the National Policy Director for Equality California. She leads the fight to protect LGBTQ+ rights at the federal level and helps provide strategic political expertise for the group’s legislative and regulatory work.