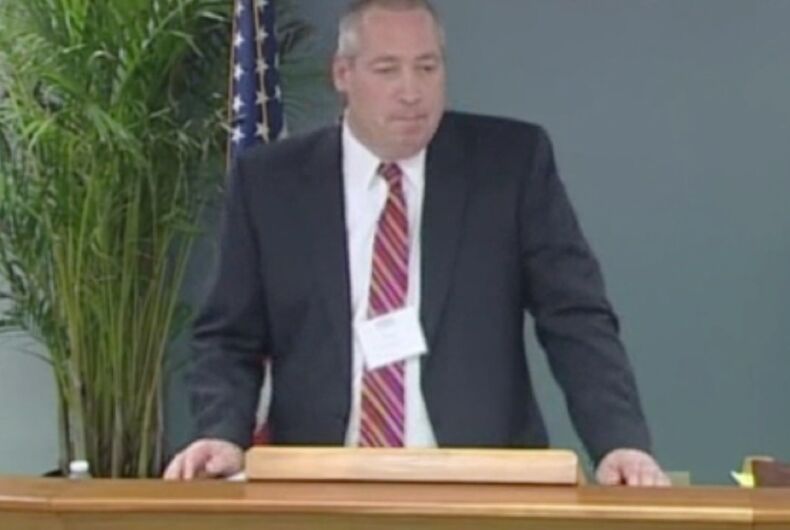 An antigay Tennessee district attorney has been cleared of ethics charges after a secret investigation. The exact charges and the reason for dismissal are still unknown because the Tennessee Board of Professional Responsibility (BPR) won’t release the documents behind the decision.

Coffee County District Attorney Craig Northcott was caught on video saying he would refuse to prosecute same-sex domestic violence cases and declining to charge anyone in the death of a gay teenager who was outed by school bullies.

Related: This cop was fired after he mocked a gay teen who died by suicide. Now he’s been hired again.

A video surfaced of Northcott telling the Theological Seminary Bible Conference in March 2018 that he refuses to prosecute cases of domestic violence involving same-sex couples because “there’s no marriage to protect.”

Northcott said that prosecutors have a lot of discretion to ignore the “five men in dresses” on the Supreme Court who ruled in favor of marriage equality and talked about how he resists that decision. He only prosecutes domestic assault cases involving gay couples as simple assault.

“Over the last two years, I have been attacked personally for and pressured to disavow my closely held Christian beliefs under the threat of losing my law license,” Northcott said in a statement announcing the dismissal of the charges. “I knew what was at risk but also understood that my first duty is always to God.”

The board, which regulates lawyers, had not announced the charges publicly.

The BPR “asked me to agree to be publicly censured for violating the rules of ethics in exchange for them not pursuing more harsh discipline up to disbarment,” Northcott said. “I refused to accept that punishment because I had done nothing wrong.”

While the BPR has acknowledged Northcott’s charges were dismissed, they’re stonewalling on providing journalists with documents that would show why they dismissed the charges since they’re so blatant.

“So the social engineers on the Supreme Court decided that we now have homosexual marriage,” Northcott said. “I disagree with them. What do I do with domestic assault? On the one hand, I don’t prosecute them because I don’t recognize it as marriage. On the other hand, if I don’t prosecute them, then the sinner, the immoral guy, gets less punishment.”

“The reason that there’s an extra punishment on domestic violence is to recognize and protect the sanctity of marriage,” he said, even though that’s not true in Tennessee. Domestic assault applies even when one person attacks someone who isn’t their spouse, like a girlfriend or boyfriend or an ex or other family members.

“And I said, ‘There’s no marriage to protect.’ So I don’t prosecute them as domestics.”

The BPR has told local reporters any requests for documents will have to be treated like a Freedom of Information Act request and will take 30 days to respond. The board says it is still “in the process of retrieving, reviewing, and/or redacting the requested records.”

Remember, Northcott was the DA who said that gay people were not entitled to domestic violence protections in his district. 2/ https://t.co/CweTCVt7Nj

The head of the Tennessee Board of Professional Responsibility confirmed that the charges (which we didn't know about) had dismissed, but she refused to just email me all the filings in the case so that I could see what had been charged – and the reason for the dismissal. 4/ pic.twitter.com/Wy9gvW0hOQ

So much for the requirements of the Tennessee Public Records Act that relevant documents shall be produced "PROMPTLY." This from the people whose job it is to make sure that attorneys are following the law. 6/6

The Board of Professional Responsibility should demonstrate some professional responsibility and release these easily retrievable records promptly as the law requires instead of stonewalling on transparency. @TNCourts https://t.co/SWeHC8cCCc