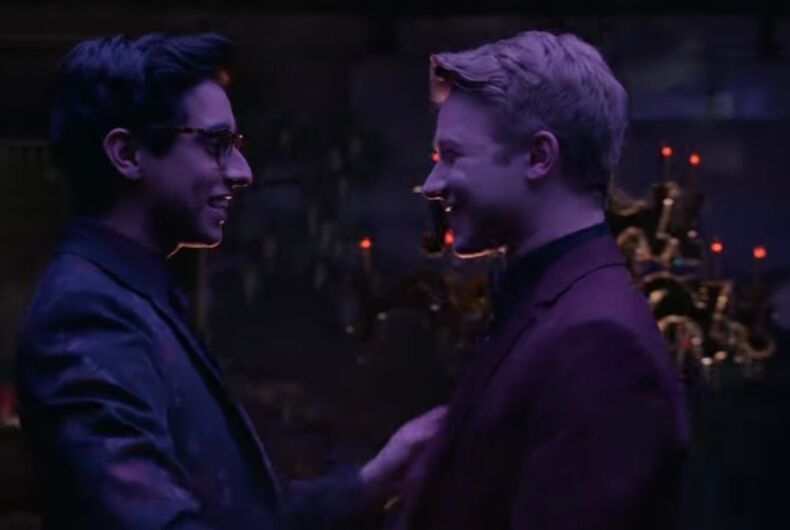 Carlos (played by Frankie A. Rodriguez) and Seb (played by Joe Serafini) dance together while Carlos sings "In A Heartbeat" to Seb.Photo: Screenshot/DIsney

A song that’s being considered the first gay love ballad that Disney has ever aired has become the talk of the internet.

High School Musical: The Musical: The Series, which airs on the Disney Plus, featured a touching song, dance, and embrace between two teens both dating in the show and in real life.

Carlos, the character played by Frankie A. Rodriguez, sings a heartfelt song, “In A Heartbeat,” to his classmate/boyfriend Seb, played by Joe Serafini, after the two characters argued throughout the show’s latest episode.

Ricky, played by Joshua Bassett — who also recently came out — accompanies the song on the guitar.

Rodriguez said in an interview with HuffPost about the song, “This is the moment where Carlos is reassuring Seb, ‘You’re it, I really feel strongly about you, I choose you’ ― that’s the lyric.”

He added, “We learn so much from television, so it’s important to show the different types of people who are out there. That adds to having compassion and learning how to understand people.”

Rodriguez and Serafini have reportedly dated for about two years after meeting on the show.

“The fun thing about playing Carlos and Seb is that they’re characters, and we leave them in that universe before we go home and just be our selves,” Serafini said.

Carlos (Rodriguez’s character) is the first out character between the High School Musical film series and this new spinoff, which airs on Disney Plus. Seb (Serafini’s character) came next, and the two characters progressed into a relationship.

The show has become Disney’s most openly LGBTQ-inclusive productions, and several cast members were either out or have come out since starting on the show. In addition to Rodriguez, Serafini, and Bassett, cast member Larry Saperstein came out at the start of June in recognition of Pride Month.

Julia Lester, who plays Ashlyn Caswell on the show, is also out as pansexual.

High School Musical: The Musical: The Series won the GLAAD Media Award in 2020 for Outstanding Kids & Family Programming, in part for its representation of LGBTQ people of color through character such as Carlos.