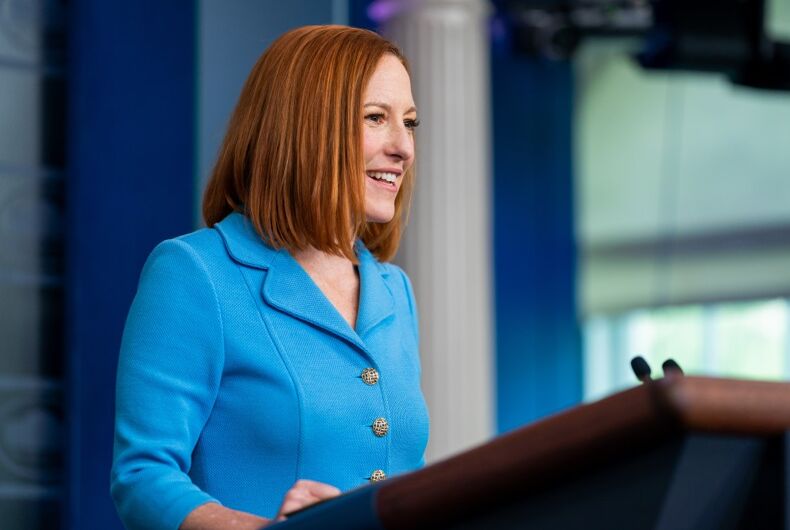 Fox News’s Peter Doocy was one of the journalists at yesterday’s press briefing who asked about Biden’s outreach to Trump on the vaccine, as if Trump doesn’t know how to talk to the media himself.

“Would President Biden ever call Trump and say, ‘I need your help, let’s cut a PSA and tell people to go do it’?” Doocy asked, referring to getting vaccinated against the COVID-19 virus.

Psaki said that the actual research on vaccine hesitancy shows that local civic leaders, doctors, and church pastors are more effective at changing people’s minds than PSA’s and that’s what the Biden administration is focusing resources on.

Then she noted that “almost every former president” has put out a PSA to convince people that the vaccines are safe and effective and that Trump could do the same as well.

“We don’t believe that requires an embroidered invitation to be a part of,” she quipped.

Fox News WH correspondent Peter Doocy asks if Biden would ever call Trump for help on a vaccine PSA.

Jeff Mordock of the conservative Washington Times also wanted to know if Biden is getting people killed because he refuses to give Trump more credit for the vaccines.

“Would [the Biden administration] consider highlighting or acknowledging in a greater way [Trump’s] role in creating the vaccines to assure the rural voters that still support President Trump that are hesitant to get the vaccine?” Mordock asked, referring to a Department of Health and Human Services private-public partnership that gave funds to some companies working to develop, manufacture, and distribute a safe and effective COVID-19 vaccine.

Psaki didn’t accept the premise of the question, which was that people aren’t getting the vaccine because Biden doesn’t flatter Trump enough.

“Do you have data to suggest that that’s the issue that’s preventing people from getting vaccinated?” she asked.

Mordock didn’t, but he said that people who live in areas that voted for Trump also tend to be places where people are getting vaccinated at lower rates than the national average, even though partisan alignment is only one of many ways that the average rural and urban American differ.

“What I’m asking you is if information related to whether or not the former president got credit is leading people not to get vaccinated, or is it information like ‘Microchips in vaccines’ and ‘It’ll cause infertility issues, causing health issues,’?” she asked. “Because you’re drawing a few conclusions there that I haven’t seen in data but maybe you have that information.”

Mordock insisted that it’s “common sense” that rural Americans who refuse to get vaccinated are very concerned with bipartisan politeness in D.C. and not misinformation they’re exposed to online.

“What we’re seeing is misinformation, traveling in a range of means – whether it’s social media platforms, some forms of media, some elected officials is the biggest factor as it related to individuals not getting vaccinated,” she said before moving on.

Psaki: What I’m asking you is if information related to whether or not the former President got credit is leading people not to get vaccinated… pic.twitter.com/M82veiA7sf