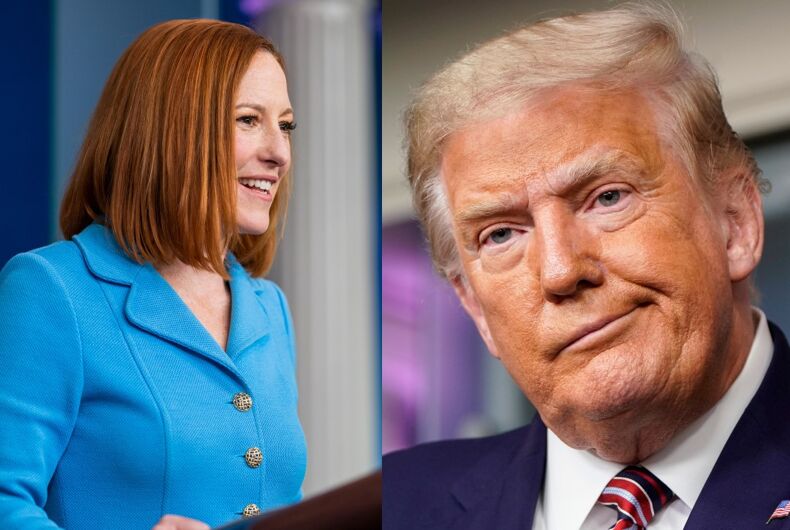 At yesterday’s press briefing, Psaki was asked about Trump’s new lawsuit against Facebook, Twitter, and other tech giants for banning him from their platforms, arguing that moderating content and blocking users who don’t follow their rules is “illegal, shameful censorship of the American people.”

His lawsuit is asking a judge to overturn Section 230 of the Communications Decency Act, which does two things: it says that social media companies and websites aren’t responsible for user-generated content, and it shields websites from civil liability as it relates to moderating content.

The journalist remembered that President Joe Biden said last year that he wants to overturn Section 230, but he meant the part about companies like Facebook not being liable for “propagating falsehoods they know to be false,” effectively calling for more moderation on social media.

She said that she hasn’t asked Biden about that specific part of the law, but said, “I will say that, as it relates to these lawsuits, it’s certainly a decision for the platforms to make.”

“I think it’s safe to say that the President spends a lot less time obsessing over social media than the former President,” she said as she ended the briefing and walked away.

Psaki: I think it’s safe to say that the President spends a lot less time obsessing over social media than the former President pic.twitter.com/ccjLdQ9vBA

Trump famously spent a lot of time on social media, especially on Twitter. He even went so far as to make policy announcements on Twitter, like when he banned transgender people from serving openly in the military in a set of tweets.

On social media, people understood just what she meant.

My teenage daughter spends a lot less time obsessing over social media than the former president.

Love that she ended the briefing with a bang! 💣💥

…and I genuinely enjoyed hearing it.

I love her to pieces! She is priceless!

Not enough to own Doocy, gotta own the former guy too. She's the best.