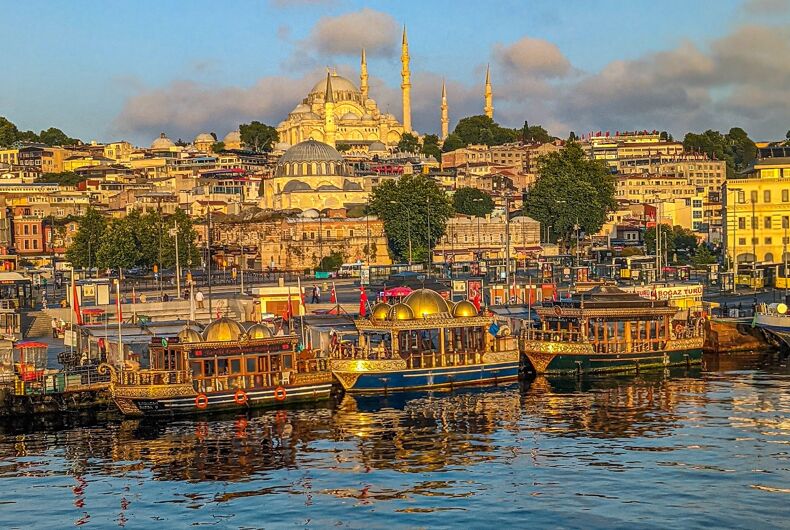 Turkey broke my heart. Which was pretty much the last thing I expected when Brent and I moved to Istanbul two months ago.

My heart hasn’t been so badly broken by a place since I left Sydney, Australia, as an exchange student more than thirty years ago. But back then, I’d been heartbroken to leave a place I’d come to love.

When we left Istanbul two weeks ago, my broken heart was much more complicated. I loved many aspects of the city and its culture, and the people we met there.

I’m really glad Brent and I decided to go there. No regrets whatsoever. But I also felt immensely relieved to be leaving.

Istanbul is often called “a city of contradictions,” but that’s mostly for things like the fact that it exists on two different continents, Europe and Asia, separated by the Bosporus Straight.

My own contradicting feelings require a bit more explanation.

First, the great parts of our time in Turkey.

Istanbul is far more beautiful than I knew.

I’ll never forget standing on Galata Bridge early one morning as the sun came up over Süleymaniye Mosque. The dome and minarets glowed as if made of the dawn’s light, everything reflecting in the water of the Bosporus stretched out in front of me.

I also remember Brent and me strolling through the Grand Bazaar, the stalls filled with bejeweled Turkish lamps, mounds of colorful Turkish Delight, and brilliantly colored silk dresses rippling in the dusky light. Other shops sold fresh spices, usually in heaping bins and barrels, and the smell of cumin and cloves was intoxicating.

The people were lovely.

Resul, the baker in the building next to our apartment, always threw in some extra treat to go along with whatever I’d purchased. The barista at Espresso Lab always greeted me by name, then practiced his rudimentary English with me. And when Brent and I did our workout routine in a local park, passersby often smiled, clapped, or even asked to take a turn with some of our equipment.

The little kids were especially adorable, and the parents loved it when we took the time to show them how to jump rope.

And the energy of Istanbul!

In my experience, only Times Square in New York City rivals Istiklal Avenue.
Thousands of people stroll along the boulevard morning, noon, and night, laughing and eating roasted corn, chestnuts, or ice cream, and window-shopping or stopping to listen to the Kurdish buskers singing folksongs about their distant homeland.

I also couldn’t get enough of the astonishing history of Istanbul. I love history, and even wrote a novel set in prehistoric Turkey. So I reveled in exploring the city’s incredible Greek, Roman, Byzantine, and Ottoman past.

Then there was the architecture!

The history of this city is told in its architecture, the ancient past flowing into the present like the buildings blend into each other.

In the old quarter of Fatih, the world-famous Hagia Sophia, Blue Mosque, and Topkapi Palace dominate the skyline with their famous domes and minarets. Then the city sweeps down the hillsides through the thriving commercial district of Eminönü and the old Jewish quarter of Balat.

The vibe was different directly across the Golden Horn in our neighborhood of Beyoglu where things were mostly “newer” — only three or four centuries old, the most notable exception being the majestic Galata Tower, which has been standing guard at the top of the hill since 1348.

Sure, there were annoyances. All the graffiti was a bit depressing. Our neighborhood could be loud, even late at night. And we’d been told Turkish food was fantastic, but in fact, we found the traditional cuisine to be pretty meh.

Still, surrounded by the city’s beauty, history, and vigor, the annoyances barely registered.

So why am I heartbroken? Why have we left and probably won’t be coming back any time soon?

Because Turkey has a very dark side — a side we saw up close and personal.

Brent and I were, of course, tear-gassed at Istanbul Pride, and we watched the police chase LGBTQ protestors down the street.

That day crystallized something I’d been sensing for weeks, even if I wasn’t yet fully conscious of it: an underlying sense of menace that lurks in the background, pervading the entire city.

But after Pride, that sense of menace was front and center, and there was no ignoring it no matter how much I tried.

I loved Istiklal Avenue, which feels so alive and vibrant, and feeds directly into Taksim Square, the unofficial “heart” of the city — especially the secular and progressive heart. It’s also the place where celebrations and protests take place.

But no doubt because this area is so alive and vibrant, it’s also very closely guarded by the police.

Stacks of police barricades always lined the entire street, ready to be deployed at a moment’s notice.

And then there were the black police cars that ominously glided along the street like hungry predators, as well as the occasional guard stations filled still with more police. The stations were all “temporary” buildings, but it was very clear they wouldn’t be taken down any time soon.

These police were obviously there not to protect and serve, but to control.

Late one afternoon, we saw Turkey’s authoritarianism on full display.

I was working in a coffee shop and heard a loud rumble outside. I stepped to the window and watched enormous armored trucks roll down the street, scary-looking plows attached to their front fenders. Busloads of police soon arrived and began assembling barricades along each entrance to the main boulevard.

I asked someone what the trucks were for, and they confirmed what I already expected: driving into crowds of protestors and forcing them to retreat or get run over.

Not wanting to be trapped on the wrong side of the avenue, I crossed Istiklal and went home to our apartment on the other side. A short time later, our street was sealed off at both ends, and no matter how much people begged, the police wouldn’t let anyone through.

A protest soon started, and it was completely peaceful. The crowd waved flags and banners, and chanted slogans protesting various actions of the government. The plan seemed to be for them to continue on until they could gather in Taksim Square, about a kilometer away.

But the police had a different idea. After letting the protesters advance a short way, they stopped the marchers cold.

Then as Brent and I looked on from the window of our apartment, fighting broke out between the police and protesters. Now the protesters shouted. Tear gas was fired, driving the crowd backward.

It wasn’t long before the smell of tear gas reached our apartment. Brent and I quickly left our little balcony and shut the windows, but didn’t make much of a difference. We’d now been tear-gassed for a second time.

The fact is, Turkey is one of the least free countries in the world

It’s rated “not free” in terms of political and civil liberties by Freedom House and has shown the most dramatic decline in liberty of any country in the world over the past five years.

Some of our Turkish activist friends told us they use encrypted media to keep the government from reading their email and speak on podcasts using pseudonyms. Many have already fled the country and others are trying because they see no future for themselves.

Ninety percent of Turkey’s “mainstream” media is controlled by the state, and the government has used Article 299 — which makes it illegal to criticize the president like I’m doing here — to investigate more than one hundred thousand Turkish citizens and open cases against tens of thousands of them.

In most cases, it’s even against the law for LGBTIQ people to hold public events. When Istanbul Pride attempted to hold a picnic in a park a week before Pride, police did what they’ve done many times in recent years: they violently shut down the event. In this case, they even broke one man’s arm.

Turkey is especially bad when it comes to the press.

Reporters Without Borders ranks Turkey 153th out of 180 countries in terms of press freedoms. The government arrested more journalists last year than any other country except China.

One German journalist admitted to me that these strongarm tactics have resulted in self-censorship even in the non-Turkish press. Foreign reporters based in Istanbul and Ankara don’t want to lose their press credentials, or get deported, or lose access. Sure, they still sometimes write and say critical things, but they pick their battles carefully, always mindful of just how far they want to go.

Which is, of course, exactly how authoritarianism and repression work.

When I mentioned to that same journalist I was writing my earlier article about getting tear-gassed at the Pride March, he said, “Gay stuff, huh? The government won’t like that. But since you aren’t official press, I wouldn’t worry too much. The worst they’ll do is kick you out.”

Being told not to worry “too much” in a repressive country like Turkey wasn’t exactly reassuring.

In fact, the night my article went live, I had a hard time sleeping. At one point, I heard loud voices out in the street. Was it the police coming to deport me? The odds were small but not nonexistent.

And then I started my own form of self-censorship: I decided after that first article, I would wait until I was safely out of the country to write anything else critical. After all, I didn’t even have the limited protection offered as a recognized member of the press.

But now I can say it: Erdogan is openly undermining democratic norms and turning a once free and secular Turkey into a repressive, fascist, fundamentalist regime. In order to hold on to power, a man who once said he would protect LGBTIQ people, has aligned himself with the most conservative and homophobic elements of Turkey’s Islamic leadership.

Almost every single day of the two months we lived in Istanbul, I explored the city. I reveled in it, taking pictures of the many stray cats, riding the different ferries, soaking up the endless energy of the city.

I was living in a country that had totally captured my heart and imagination in so many ways.

But at some point every single day, I would also find myself facing a police officer with a machine gun.

Brent and I have lived in repressive countries before, but never anywhere like this. Not where the darkness is so visible — and in such contrast to the light.

I felt that fear and repression — I still feel it.

And that’s how Turkey broke my heart.