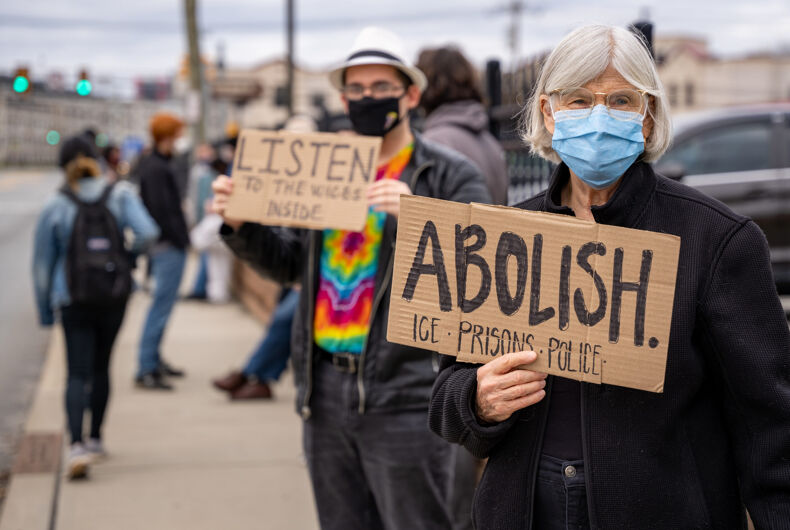 Rep. Mike Quigley (D-IL) has once again led a group of Democrats in the House of Representatives requesting that the Immigration and Customs Enforcement (ICE) agency release all transgender detainees in their detention facilities. This follows a similar measure by Quigley and several House Democrats issued in early 2020,

In a new letter, Quigley and 29 other members of the House additionally asked for the release of all detainees living with HIV. Quigley — the Vice Chair of the House LGBTQ+ Equality Caucus — and others are also seeking data specific to LGBTQ detainees in ICE custody from the agency.

Related: Federal judges refuse to use defendant’s correct pronouns because it would be too hard

Quigley’s letter comes just one day after ICE announced that it will reverse a policy enacted under the Trump administration, and stop detaining people who are pregnant, nursing or just gave birth within the last year in their facilities for deportation.

This letter, like one previously issued by Quigley and others, asserts that ICE’s detainment and judicial procedures are disproportionately harming trans people, citing recent evidence of rampant sexual abuse of trans inmates.

It is addressed to Secretary of Homeland Security Alejandro Mayorkas, appointed by Biden and confirmed, as well as ICE Acting Director Tae Johnson, a holdover from the end of the Trump administration. Biden’s nominee for ICE Director, former Houston sheriff Ed Gonzalez, awaits confirmation.

“Immigration detention is notoriously dangerous and harmful for transgender immigrants, who are likely to be seeking asylum based on transphobic violence they have already faced,” the letter states, “and because of such histories are likely to suffer from depression, post-traumatic stress disorder, and other mental health conditions.”

The letter notes that even when ICE makes trans-only detention facilities, their treatment of detainees and the unstable condition of said facilities led most of them to be closed.

“Even when ICE has endeavored to set up specific detention units tailored to comply with the requirements of its own 2015 guidance on the detention of transgender individuals, its efforts have failed,” the letter denotes.

The members of Congress also add that “Evidence has overwhelmingly shown that those with HIV receive woefully insufficient and inconsistent treatment for their condition,” and “for those living with HIV, such poor medical care could quickly lead to death or serious health consequences.”

For these reasons, “It’s clear that ICE is not fully capable of safely and humanely detaining transgender and HIV+ individuals. As these individuals face civil, and not criminal proceedings, alternatives to detention that protect the health and safety of these individuals is paramount,” the letter continues.

“We therefore write again today to urge ICE to ensure the release of all transgender people and people living with HIV currently in custody either on recognizance or under supervision.”

The authors also ask for the agency or its overseeing federal department, the Department of Homeland Security (DHS), “to formally and publicly announce that ICE will no longer detain transgender individuals and people living with HIV, utilizing release into the community or alternative to detention programming instead.”

Finally, the letter requests information in five areas is consistently provided to Congress, most notably, “How many trans detainees are in ICE custody” and “How many people living with HIV are currently in ICE custody.”

The House Democrats also ask for information on ICE’s current policies, training, and written material regarding trans detainees or outlines “discussion of sexual orientation and gender identity with individuals in ICE custody.”

Lastly, they request any information pertaining to “any work between ICE and NGOs to facilitate the release of and legal representation for all transgender individuals.”

In addition to the Congressional signatories, 60 advocacy organizations also co-signed the letter, which goes along with a letter of similar requests sent by some of the same groups on June 18. LGBTQ advocacy organizations such as AIDS Foundation Chicago, Black LGBTQIA+ Migrant Project, the Casa Ruby Community Center, the LGBTQ Freedom Fund, Los Angeles LGBT Center, the Marsha P. Johnson Institute, and the Transgender Law Center were among the co-signers to the Congressional letter.

In January 2020, Quigley spearheaded a letter co-signed by 43 other House Democrats to DHS and ICE.

“The United States is bound by domestic and international law to protect — not punish — vulnerable populations escaping from persecution,” that letter read.

They noted that LGBTQ inmates “are 97 times more likely to be sexually victimized than non-LGBT people in [ICE] detention.”

They specifically named two trans women detainees of ICE facilities who have died – Roxsana Hernández, who passed from AIDS-related complications on May 25, 2018, and Johana Medina León on June 1, 2019. Hernández was sick in custody for 12 days without treatment. León came to the country to file for asylum, and was not here illegally – yet, she was preemptively detained by ICE, and died days after her eventual “parole.”

Since the Biden administration began in January 2021, ICE policy has been revised to allow for “generally” releasing migrant families that are detained together — rather than detaining them and separating them in various facilities across the country — and now people who are pregnant or have given birth recently. Advocates hope that trans people and people living with HIV will get that consideration soon.

Members of one co-signing organization, Familia: Trans Queer Liberation Movement, expressed why they believe the letter was necessary in statements released by Quigley’s office.

“We marched to call urgency to end trans detention for all queer and trans people as well as those living with HIV while in custody,” Familia lead organizer Jorge Gutierrez said, “we rallied from National City Christian Church to the White House and we will do it again until all the Victoria’s, Roxsana’s and Johana’s facing a death sentence while in ICE custody are free!”

“Victoria’s” refers to Victoria Arellano, a trans woman that lived with HIV who died in an ICE facility in 2007 after being refused medical care.