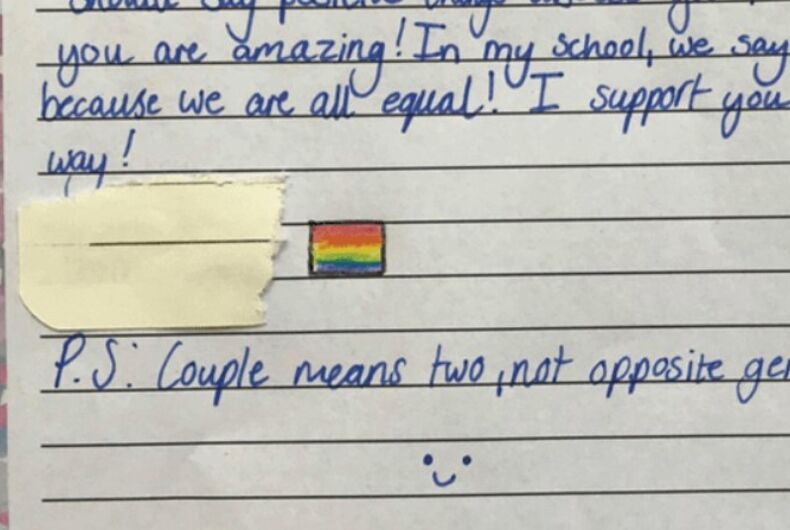 The letter from the girl, signed with a rainbow flagPhoto: Screenshot/via Facebook

An elder gay couple was shocked to receive a hateful letter from a grandmother after they appeared on their local TV station’s Pride coverage. But a heartwarming letter from a supportive nine-year-old girl lifted their spirits again.

Dits Preece and his partner Allen of Alderney, U.K. appeared on the ITV Channel as it covered Pride Month. The men held hands, which was enough to anger one viewer.

A grandmother who saw them on TV wrote a letter saying that they disgusted her and her family so much that they lost their appetite.

She said that the men’s appearance on TV “put me and my husband and grandson off our tea.”

“My grandson asked why that man had his hand around the other one,” she complained. “A couple is a man and a women [sic], it always will be.”

Preece posted the letter to Facebook, where he called it “pathetic.” That led to an outpouring of support in the comments and a handwritten letter from a nine-year-old girl.

“After reading your letter, I was in absolute shock!” the girl, whose name is not being used in the media, wrote. Her letter was posted to Facebook by the local organization No Outsiders.

“How could someone be so rude?”

She said that the grandmother should “think about your feelings” and stressed that Preece and his partner should “feel proud to be gay and go on television to speak about LGBTQ+.”

“Ignore what the negative people say about your relationship because they are wrong! They should say positive things about you two because you are amazing!”

She drew a rainbow and then remembered to point out that “couple means two, not opposite genders.”

Actor Alyson Stoner checked herself into conversion therapy. Now she’s speaking out against it.