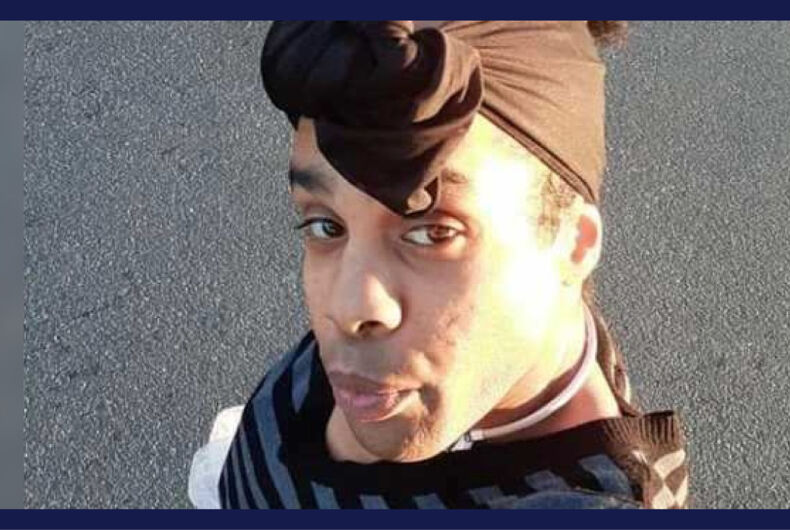 Following an investigation, a special grand jury has returned a bill for indictment against Spotsylvania County Sheriff’s Office deputy David Turbyfill for a charge of “reckless handling of a firearm resulting in serious injury.” The charge is a felony that carries a punishment of between one to five years behind bars upon conviction.

Turbyfill was the subject of an investigation after the shooting of Isiah Brown (also reported as Isaiah), a gay Black man, outside of his home in response to a 911 call.

Related: Gay couple beaten by bloodthirsty mob for dancing together at a bar

“The Special Grand Jurors charge that…David Matthew Turbyfill, on or about April 21, 2021, did unlawfully and feloniously handle any firearm in a manner so gross, wanton, and culpable as to show a reckless disregard for human life and cause the serious bodily injury of another person resulting in permanent and significant physical impairment,” the indictment stated.

Charges were bought by a special prosecutor, the Commonwealth’s Attorney of Fredericksburg LaBravia Jenkins. She is retiring, however, and won’t oversee the prosecution.

“Isiah Brown and his family are pleased that Spotsylvania County Deputy David Turbyfill has been indicted on a felony charge,” David Haynes of the Cochran Firm, which is representing the family, said in a statement.

“The shooting resulted in significant injuries to Mr. Brown which will undoubtedly impact him for the rest of his life,” Haynes added.

Haynes said that the family wants Turbyfill immediately terminated by the Spotsylvania County sheriff, “the release of all audio communication” between him and 911 dispatch operators, “all video from the scene as well as Turbyfill’s employment records and personnel file.”

He concluded, “While this indictment doesn’t take Mr. Brown’s physical pain away, it does signify a measure of justice. We look forward to the successful prosecution of David Turbyfill.”

Anthony Foote, the President of Fredericksburg Black Lives Matter, told WUSA9, “I’m overjoyed, of course. We finally have accountability” — but he hopes that more accountability will be delivered in the case.

“I still believe that dispatch has an onus in this as well. This could have been stopped with the person on the phone as she relayed this to the officer. I would truly like to see accountability be held down the chain,” he said.

“If you’re going to hold the shooter responsible, hold the person who gave him the idea that it was okay to shoot.”

Brown, 32, is a gay Black man and home healthcare aide whose car broke down in the early morning hours of April 21. A sheriff’s deputy gave him a lift home, and it was reported that the same deputy — Turbyfill — would return just minutes later and open fire, after a 911 call was placed by Brown.

The call was referred to as a reported “domestic disturbance” in initial police statements, and Brown was relayed as a “suspect” by the department.

After initially not pledging to, the Spotsylvania County Sheriff’s Office of Virginia released 911 call audio and bodycam footage from one of the deputies. Brown’s family said that he suffered 10 gunshot wounds from eight bullets, although the Sheriff’s Office has contended otherwise.

According to the 911 call’s audio, Isaiah was complaining that his brother, Tazmon Brown, wouldn’t let him get his car keys. Isiah then threatened to kill him and repeatedly asked his brother for “the gun.” Tazmon can be heard refusing.

Two sheriff’s deputies arrive, and after repeatedly asking Isiah to “drop the gun,” the deputy that droved Isiah home earlier opens fire. The officer then continues to request he “drop the gun.”

Isaiah did not have a gun when he was shot, and he was not dead. He was subsequently hospitalized for over a month after the shooting.

After being unconscious for weeks in the hospital with his sister, Yolanda, as one of his only visitors due to COVID-19 restrictions, Brown began recovering and was sent home on May 25.

Turbyfill remains on the force as of now, although he has since been reassigned to administrative duties which is “standard practice.”

The Sheriff’s Office declined to comment on the case further according to the Free Lance-Star.

Christian organization attacks fast food for being too pro-LGBTQ