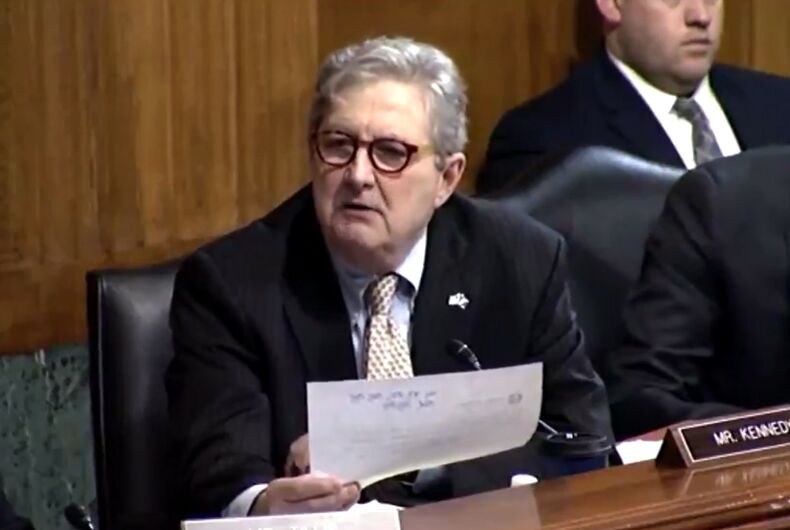 A Republican senator grilled a Biden administration nominee on whether he believes in God during a heated exchange in a committee hearing.

Related: With just two words, Amy Coney Barrett revealed how biased she is against LGBTQ people

It turns out not everyone in the GOP is on the same page about how awful it is to ask appointees anything even tangentially related to their religion.

“Senator, I have faith… I believe, um… I-,” Dellinger responded, visibly uncomfortable with the question.

“A lot of people have faith!” Kennedy shot back. “Did it ever occur to you that some people may base their position on abortion on their faith?”

“Senator, I… I sincerely appreciate people who have a different position on abortion than I do-,” Dellinger started to respond before being cut off again.

“You sure don’t tweet it,” Kennedy said. “You ever tweeted that?”

“Well, Senator, I’m saying it now under oath,” Dellinger responded. “Senator, I recognize the difference between someone saying something inartfully as a private citizen and working as a lawyer and I think I’ve got a 30-year track record of being open-minded.”

Slate‘s Mark Joseph Stern contrasted Kennedy’s questions to a 2017 exchange in the same committee from 2017, when Amy Coney Barrett was first nominated to the federal bench. Sen. Dianne Feinstein (D-CA) told her that Democrats believe “that dogma and law are two different things” and that Barrett’s speeches lead one to believe “that the dogma lives loudly within you.”

“And that’s a concern when you come to big issues,” Feinstein said.

After that exchange, the right was incensed that anyone would suggest that Barrett’s religious beliefs might influence her work as a judge.

“This pattern and practice of religious bigotry — because that’s what it is, when you tell somebody they are too Catholic to be on the bench, when you say they will be a Catholic judge, not an American judge — that is bigotry,” said Sen. Josh Hawley (R-MO) at the time.

Sen. Kennedy himself denounced Feinstein… but he made sure to say that his objection wasn’t with Feinstein bringing up Barrett’s religion, but to the idea that anyone would ever criticize a Christian.

“I know it must hurt for someone of deep Christian faith like yourself to be called a religious bigot and to have it implied that because you are a devout Christian that you’re somehow unfit for public service,” Kennedy told Barrett.

The GOP position appears to be: Democrats aren't allowed to ask Republican nominees any question that might tangentially relate to religion, even if the nominee has said their religion informs their views. But Republicans can impose a religious test on Democratic nominees.

Here’s Republican Sen. John Kennedy imposing a religious test on Hampton Dellinger, a Biden nominee to the Justice Department. “Do you believe in God?” pic.twitter.com/Q9Mk3OpsRY

The selfishness of the anti-vaxxers places us all in peril