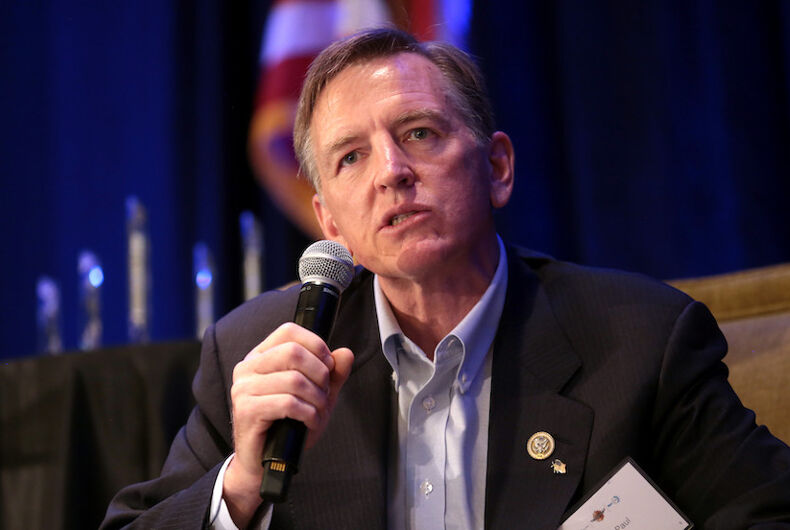 How extreme is the Republican party these days? So extreme that a GOP Congressman appearing at a fundraiser for a white supremacist group is met with total silence from the party leadership.

While Marjorie Taylor Greene has been getting all the attention for her antics, Arizona Representative Paul Gosar has been largely sailing underneath the radar.  Greene’s anti-Semitism and support for violence against Democrats forced House Republican Leader Kevin McCarthy to strip her of her committee asssignments in February. Yet Gosar, who is every bit as extreme, has been left untouched.

Gosar’s most recent stunt involves Nick Fuentes, head of America First, a white supremacist group. Fuentes, who is just 22, rose to prominence at the 2017 white supremacist march in Charlottesville. He has been increasing his influence ever since, first through YouTube (from which he was banned in 2020) and then through his podcasts.

Fuentes is the leader of the Groypers, a loose-knit group described by the Anti-Defamanation League as attempting to normalize their white supremacist ideology “by aligning themselves with ‘Christianity’ and ‘traditional’ values osstensibly championed by the church.”

Fuentes doesn’t try to hide his hatreds. “The math doesn’t seem to add up there,” he has said in talking about the murder of 6 million Jews in the Holocaust. He has boasted that “white people wield the best racial slurs” and argued that “we want children to be happy and not on drugs, and that’s why we opposed mixed (race) marriages.” As for the increasing diversity of the country, Fuentes complained, “Does anybody believe that for five seconds, that the country getting less white and becoming non-majority white—does anybody think that will be an improvement?”

Needless to say, Fuentes traffics in anti-LGBTQ hatred as well. Earlier this year, he went after Lil Nas X, using homophobic and racist slurs to encourage Black people and Republicans to bash the out rapper for his sexuality. On his podcast, he also slammed the GOP for not being homophobic enough, and called for them to stand “against the rainbow flag” if they’re actual conservatives.

In Gosar, Fuentes has found a powerful friend. “There is some hope, maybe, for America First in Congress,” Fuentes has said.  “And that is thanks to — almost exclusively — to Representative Paul Gosar.” America First refers to a white nationalist worldview espoused by Republican former President Donald Trump.

Gosar is more than willing to return the compliment. He appeared at at America First conference last February. “Wow, what a group,” Gosar enthused.

With the fundraiser, Gosar may have gone a bit too far. Although his appearance at the conference was a lure for attendance (and money), actually signing onto a fundraiser for the group is another thing.

At first, Gosar defended his position. “Not sure why anyone is freaking out,” he said on Twitter. Since then, he’s been a lot cagier, suggesting that he knew nothing about the group’s white nationalist views. In refusing to chastise Gosar, McCarthy said that Gosar assured him the fundraiser was “not real.”

But the fundraiser is hardly the only proof of Gosar’s extremism. Like Fuentes, he was also a speaker at the January 6 “Stop the Steal” Trump rally and still insists that Joe Biden won the 2020 election by fraud. He has spoken to other far-right fringe groups, like the Oath Keepers miitia. He has engaged with all of the wildest conspriacy theories that you can imagine, including QAnon, the belief that the government is hiding aliens in Area 51 and that liberal financier George Soros helped kill Jews in the Holocaust.

Yet the Republicans seem perfectly happy to let Gosar mainstream reprehensible beliefs. McCarthy, who is the defintion of feckless, was far switfter to excommunicate Wyoming Representative Liz Cheney for the sin of telling the truth about Trump’s lies.

Meanwhile, Gosar’s own siblings are showing more fortitude than McCarthy. They want their brother kicked out of Congress. “I consider him a traitor to this country. I consider him a traitor to his family,” his brother Dave told NBC News. The siblings’ stand is not new. They even cut an ad in 2018 warning voters that their brother was unfit for Congress.

The weird, wonderful relationship between Istanbul and its cats