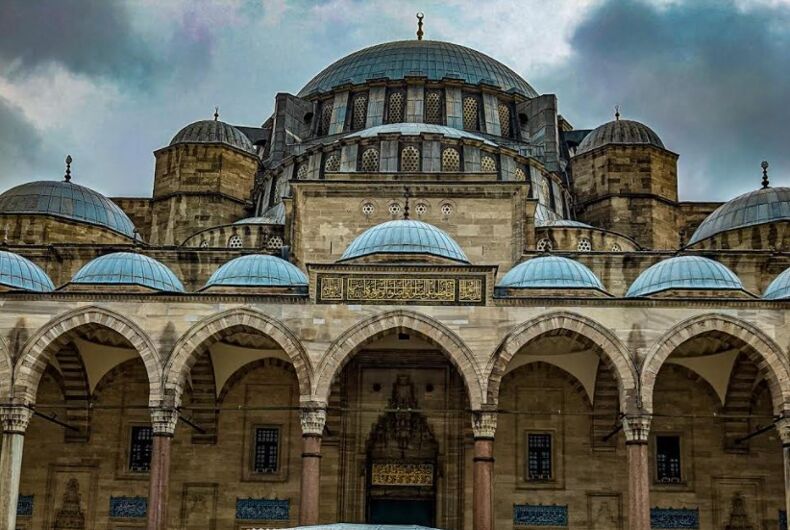 “If I go back to India, I will have no choice but to marry a woman.”

My husband Brent and I are currently in Istanbul, Turkey, and we recently attended a dinner party that included German expats, local Turks, as well as Rehan, a twenty-nine-year-old gay Muslim Indian man.

(Names have been changed to protect the privacy of the people in this article.)

Rehan had come to Turkey the previous year, traveling with his Australian partner, but they had recently broken up. Now he was living rent-free with a friend, at least for a few months.

Brent and I exchanged looks, heartbroken by what our new acquaintance had just confided in the group.

Rehan shrugged. “I’m a trained massage therapist, but I can’t do that because of COVID. I have no money left. And the economy here is so bad that there is no other work for me.”

Rehan smiled. “My ex-partner and I visited my family many times, even stayed there together, and they never believed he was anything other than my employer. The idea that I am gay is simply something they can’t conceive of.”

“Besides,” he went on, “I love my family very much, and my being out would hurt them very badly. It would really hurt my sister’s marriage prospects, and also my niece’s, who I helped raise and love dearly. Everyone would shun my family, not want anything to do with them. I cannot do that to them. But if I go back and do not marry, I have to move into my mother’s apartment, which she shares with a dozen other people.”

I tried – and failed – to imagine sharing an apartment with twelve other people.

Rehan sighed. “I have gay friends back home who have married, and they are very, very unhappy. I’m hoping maybe I can find a lesbian to marry, though I don’t know how to find one.”

Everyone sat around the table, absorbing Rehan’s tale, trying to imagine coping with such circumstances.

While same-sex sexual activity is legal in Turkey, the country is 97% Muslim (99% according to the government) and LGBTQ rights have been going backward in recent years.

Pride events are no longer allowed to take place anywhere in the country and government officials publicly denounce homosexuality. Meanwhile, LGBTQ Turks have no protection against discrimination under the law.

Istanbul is still considered the best place to be queer in Turkey, and there is a LGBTQ community here. We recently attended an art exhibit by a queer woman, and there are gay bars and some gay-friendly cafes and restaurants.

But in all of our time here, we’ve only seen a single Pride flag in our supposedly gay-friendly neighborhood, and Istanbul’s queer scene is increasingly taking place behind closed doors and in an atmosphere of growing fear.

That makes life even harder for people like Rehan and others, especially when it comes to dealing with family.

Cahil is a 37-year-old engineer from a small town in eastern Turkey. He moved to Istanbul a decade ago, but that hasn’t stopped the non-stop pressure from his family to marry.

“I was able to put my family off for all of my twenties,” he told us, in part because his younger sister had married very young and already produced a grandchild. “But in my 30s, the pressure got much worse. Every Turkish man is expected to get married and have a child. It’s very important. In fact, when I was younger, I was once engaged.”

“My family arranged it,” said Cahil. “I went home to meet with her several times, and she and her family liked me very much. I am handsome and well-educated, and I finally agreed to marry her, if only to make the pressure from my family stop. But once were engaged, we started having sex, and I couldn’t go through with the marriage. I found a way to call it off, but that meant the pressure from my family is back to the way it was before, maybe even worse now. If it gets too much worse, I may have to leave the country.”

Fatima and Meral are two women in their late 20s. They were a couple once, but are just friends now. Meral has been out to her family for several years, but Fatima has no plans to follow suit.

“Turkey used to be not so bad for queer people,” said Fatima. “But things are getting much worse. I used to judge a neighborhood safe by where we could at least hold hands. Now there are no more safe neighborhoods. In rich, elite neighborhoods like Moda and Nişantaşı they will stare at you for sure. Anywhere else you are open, people will feel they have the right to beat you up.”

Fatima also told us she did a queer podcast using a pseudonym and now used an encrypted messaging service, while Meral said she only uses encrypted email. Both did so out of fear of what the future might hold for people like them.

Turkey has very strict laws concerning criticism of the government and has arrested some activists and is investigating others.

When I asked Meral when she thought things might get better in Turkey, she pondered it for a moment, then said, “Maybe thirty years. Maybe forty. It’s going to take a very long time.”

Fatima added, “Everyone who can get out of Turkey has gotten out.”

I thought of Cahil saying he was going to leave, possibly to the U.S. where he had once learned to be a pilot. He was one of the rare Turks we’d met who had the job skills to make that drastic choice. For most people in Turkey, and for Indians like Rehan, that’s not an option.

There was a time when Turkey was vying for admission to the E.U., but they no longer are. In fact, Turkey recently pulled out of the U.N.’s Istanbul Convention which had been created to protect women, especially against domestic violence.

Since Turkey isn’t part of the E.U., queer Turks aren’t able to simply move to a more tolerant Western European country. And even if they do have an E.U. passport – like one of these individuals happens to – the cost of living there is so much higher that moving to a better country is almost always impossible.

Later walking home from the dinner party, Brent and I talked about Fatima and Meral, as well as Rehan and Cahil’s situations.

“It’s one thing to read about what life is like for gay folks in Turkey or India,” I said. “But meeting them in person makes it so much more real.”

“It’s hard to know what to do other than listen and be supportive,” said Brent.

I nodded. “And we can write about it too.”

Visit Kaos GL to learn how to help the LGBTQI community in Turkey. Or join Outright Action International, which works to promote LGBTIQ equality around the world.