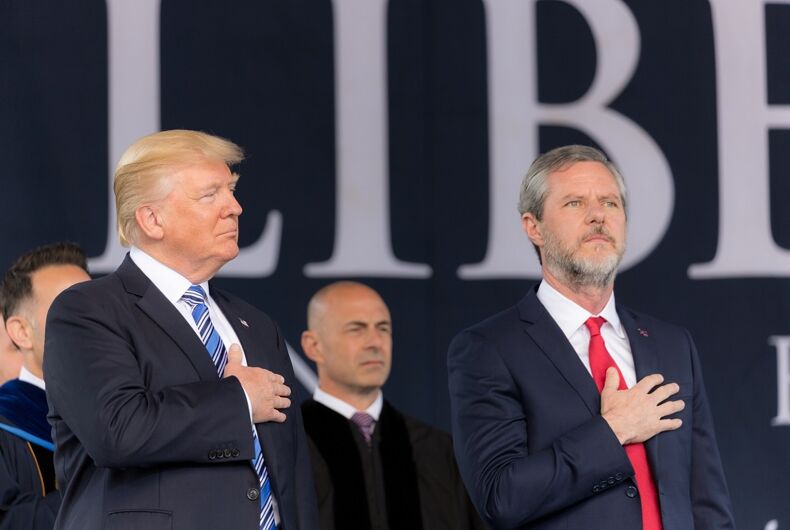 LeeQuan McLaurin, a former staffer at Liberty University’s Office of Equity and Inclusion, is suing his former employer for race discrimination, sex discrimination, and retaliation following complaints to human resources. McLaurin asserts that his supervisors consistently punished him for not holding traditional evangelical beliefs, and he was not allowed to do certain things because he is a Black, gay man.

McLaurin alleges that the school paid him less than others, assigned him to a job that he declined, and his supervisor “demanded that he profess an understanding that God hates LGBTQIA+ people.”

Related: The Jerry Falwell Jr. saga continues. But the real focus should be on Liberty University.

McLaurin graduated from the school in 2015 and has worked for the school since. He worked as the associate director of student engagement and director of diversity retention at the evangelical college from July 2018 to June 2020.

While there, according to his lawsuit, he was constantly berated by his supervisor Greg Dowell for his identity and beliefs. The school used his likeness and image to appear more diverse while misrepresenting his politics, using his name and image to invite the Liberty University community to an event hosted by conservative commentator Candace Owens.

McLaurin accuses the school of using him “as a token representative of the Black community without his consent.” Their mistreatment violated about seven state and federal laws, the lawsuit claims.

He was also expected to “profess an understanding that God hates LGBTQIA+ people.”

“In November 2019, Mr. McLaurin’s supervisor told him that homophobia did not exist at Liberty University and that he and other members of the LGBTQIA+ community should be happy that Liberty ‘allowed’ them to be there.”

McLaurin was already taking on the responsibilities of two vacant positions when the school offered him the position of director of diversity retention starting at a salary of $52,000. The lawsuit states that McLaurin found that to be $8,000 less than the previous holder of the position — who was straight and Hispanic — so he declined the job. The school gave it to him anyway in February 2020.

When he wrote Dowell about the decision, McLaurin “simply received a hollow promise that so long as he did his job effectively his salary would be increased.”

Then there were Liberty University’s “cultural excursion” trips that McLaurin was made to supervise, even though he did not plan them. He alleged that another Liberty University employee sent out a mass email under his email address promoting the “excursion” to Richmond, including a trip to the “Blexit” tour stop being held by Owens.

McLaurin said that supervising nearly all-white students on the 14-hour “excursion” made him feel “like I was in a horror movie.”

He began complaining to human resources about his treatment. Afterwards, McLaurin was “routinely excluded from meetings about diversity on Liberty University’s campus,” which made it difficult to complete his work since such meetings were directly related to the position he was forced to take.

He told the News-Advance in an interview that he tried to stay through it because of the students. “For me… no one else is really here advocating for these students and they need somebody,” McLaurin said.

Eventually, McLaurin continued to push back against the school. It culminated in McLaurin making a post on June 1, 2020 to a school Facebook page reading, “Black Lives Matter,” accompanied by several Bible verses.

While reports indicate he left the job voluntary later that month, McLaurin’s suit reveals that he was “constructively discharged” following the post.

After then-school president Jerry Falwell Jr. posted tweets that showed off masks, one embedded with depictions of a KKK outfit, and another with a picture of former Virginia Gov. Ralph Northam in blackface, McLaurin began fundraising for other Black former employees of Liberty. He and eight other ex-employees raised at least $2,000.

McLaurin’s story was the subject of an expose published in Slate in June 2020 detailing the realities of being Black at the evangelical college.

“It’s hard to know what I know and not speak up,” he said at the time. “My hope is I’ll get so much out there that they’ll have no choice but to change.”

McLaurin is asking for lost pay and benefits he says the school owes him, as well as unspecified damages. He also requests that Liberty staff receive training on discrimination in the workplace and “supervisory discipline” is imposed on any employees who took part in the discrimination, up to and including termination.

The lawsuit calls for the court or a federal agency to place Liberty University under monitoring to ensure their compliance with any such imposition.

“I really hope that they are held accountable. At what point is enough enough?” he said to News Advance.

After attending therapy and seeking mental health care following his time there, McLaurin is now a diversity, equity and inclusion (DEI) consultant.

Falwell resigned as Liberty University president weeks later, although he has remained a consistent presence at the school.

The Olympics has enough things to worry about. Black hair shouldn’t be one of them.