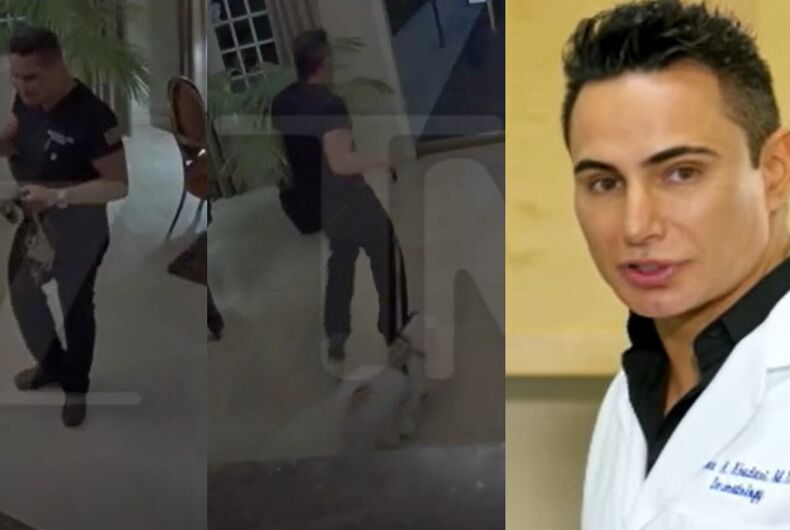 Dermatologist-to-the-stars Dr. Alex Khadavi was allegedly caught on video going on a violent, homophobic tirade. His gay neighbors have filed for a restraining order against him, saying they’re afraid for their lives.

“I’ll fuck you up. Fucking faggots,” he says in the video obtained by TMZ. “I’ll fucking shoot you in the fucking face.”

Khadavi, whose clients include Lance Bass and Scott Disick, is shown in the lobby of his West Hollywood condo complex going on a tirade about his gay neighbor, repeatedly shouting slurs and violent threats in the July 7 video.

“I don’t give a fuck,” he says. “I’m protecting my [unintelligible] rights! Ain’t no fucking faggots-”

The concierge appears to cut him off, but that only makes Khadavi more agitated.

“Nobody tells me what to do. Nobody!” he says. “My parents don’t tell, nobody tells me. I’ll fucking shoot you in the fucking face. Fucking fag.”

He says that someone should “fucking blew their fucking heads off” before leaving to walk his dog, although it’s not clear what set him off or who he was referring to specifically from the video.

Legal documents show that a male neighbor and his husband filed for a restraining order against Khadavi after the concierge said that Khadavi was asking questions about the gay couple and insinuating that he was going to kill them.

The concierge said that Khadavi once showed him a handgun before taking his dog out for a walk. Now his neighbors say they’re afraid for their lives.

Provincetown COVID cluster balloons to over 250 infected since July 1

Will Pete Buttigieg be the first gay man to go to space? He’s willing.