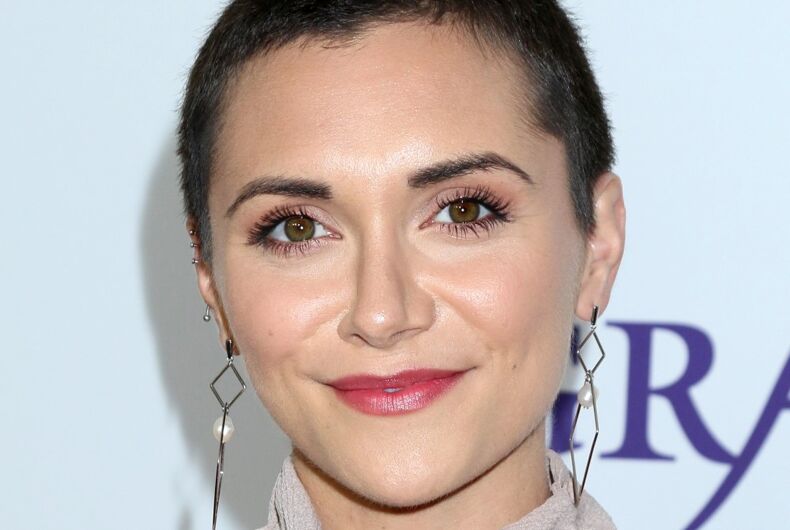 Out actor and dancer Alyson Stoner recently opened up about the trauma she experienced after admitting herself to conversion therapy.

In an interview with Insider, Stoner discussed the internalized shame she felt over her sexual orientation and how she attended an “outpatient variation” of conversion therapy after she fell in love with a woman and couldn’t reconcile her feelings with her religion.

Related: Demi Lovato talked about the “reality” of coming out as nonbinary & changing their pronouns

“I felt stuck. I felt wretched,” Stoner, who is pansexual, said. “I felt like everything was wrong with me, even though I, in my heart of hearts, only desired to be a devoted follower of God.”

In conversion therapy, she spoke with pastors and tried to understand their beliefs, but doing so turned out to be extremely harmful.

Nobody can take away your growth and transformation. The evidence is in your presence.

“To hear from people you trust, from people you respect, from people you might even aspire to become, that you at your core are ‘rotten,’ ‘abominable,’ that the devil has a target on your back because of your position in Hollywood… It just sends you into a spiral, at least for me, because I just wanted to do the right thing.”

Conversion therapy, she added, was also harmful to her mind-body connection and made her see her body as something shameful and untrustworthy.

“It actually ends up messing with my ability to foster genuine relationships with others and myself, because now I’m suppressing a voice. I’m trying to change something that is what I now understand very natural.”

Her new book, Mind Body Pride, is meant to help queer people “reconnect with their mind and body,” her website explains. All of the proceeds also go to LGBTQ youth wellness programs.

I wrote #MindBodyPride to help you reconnect your mind & body, relieve stress, and celebrate your authentic well-being.

It’s designed particularly to support the mental & emotional health of queer folks/allies. However, all are welcome & can benefit! 💜https://t.co/imuLoxDcGm

Stoner, who is also outspoken about the dangerous pressures Hollywood places on child stars, told Insider she still struggles to talk about her conversion therapy experiences today.

“My mind doesn’t want to even go there. My legs started shaking at the thought of reliving some of it. I know firsthand how dangerous it is for me as someone who had access to therapy and other forms of support. And I still was considering whether my life was worth living or, if everything was wrong with me, then what good was it for me to be around, starting to see myself as someone who only brought harm to other people to society.”

It has been proven time and again that conversion therapy not only doesn’t work but is also extremely damaging to LGBTQ people.

Aspiring to be like an all-natural, high quality air freshener that improves the experience of every space I’m in without even being visible.

“The dangers are measurable,” Stoner said. “They are measurable. Even if someone comes out of it on the other side and says, ‘Hey, no, I’m living a great life,’ there are scars there. There are shadows. So yes, I’m not capable yet of going back and recounting specifics, which is an indicator of just how difficult that chapter was for me.”

Granny lost her appetite when she saw a gay couple on TV. A 9-year-old girl had the best response.