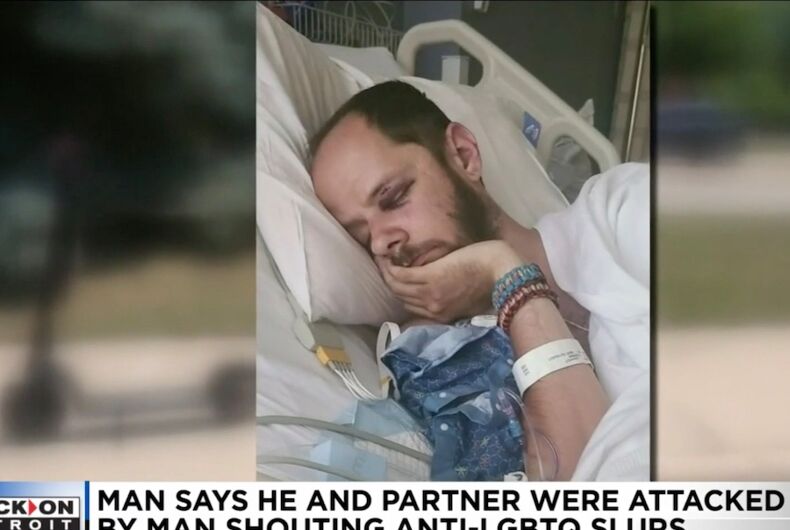 A gay man in Harrison Township, Michigan has been hospitalized after a vicious attack that his partner said was a hate crime.

On June 15, Anthony Hamilton and Michael Hall were riding scooters together on their way home from work when a driver in a white Sedan pulled over and began yelling anti-LGBTQ slurs at the couple.

Hall and Hamilton kept moving, but the car followed. Eventually, Hall stopped and told the driver to leave them alone. This led the driver to get out of the car and begin assaulting Hall.

“He socks Mike in the face and he fell onto the blacktop and doesn’t move,” Hamilton told Click On Detroit.

“I remember pointing down and I remember looking at him going, are you okay, like why are you doing this,” he continued, in tears, “Dude do you know what you did this guy could be hurt and I’m shouting to his friend [who was in the passenger seat of the car] dude dial 911.”

According to a GoFundMe that has been set up to support Hall, “The driver continued to hover over Michael while threatening to kill him.”

Hall was taken to the hospital after suffering a skull fracture, brain bleed, fractured eye socket, memory loss, and a broken nose. As of June 17, he was alert and had been moved out of the ICU.

The perpetrator, who is white and approximately 5’ 11”, has not yet been identified. With no cameras in the area where the attack happened, the police are asking anyone who may have witnessed it to come forward.

“Michael will have a long recovery and will struggle with memory for the next few months,” the GoFundMe explains.

It went on to say that Hall was planning to travel to North Carolina for a family reunion on June 17, but of course, had to miss it.

Thus, the fundraiser is not only seeking to cover his medical bills but also to help reunite Michael with his family for another trip.

“We are asking for friends, family, and the community to band together to show Michael that there is still some faith in humanity. Michael and Anthony have suffered some serious Post-Traumatic issues from the assault and are very thankful to be alive.”