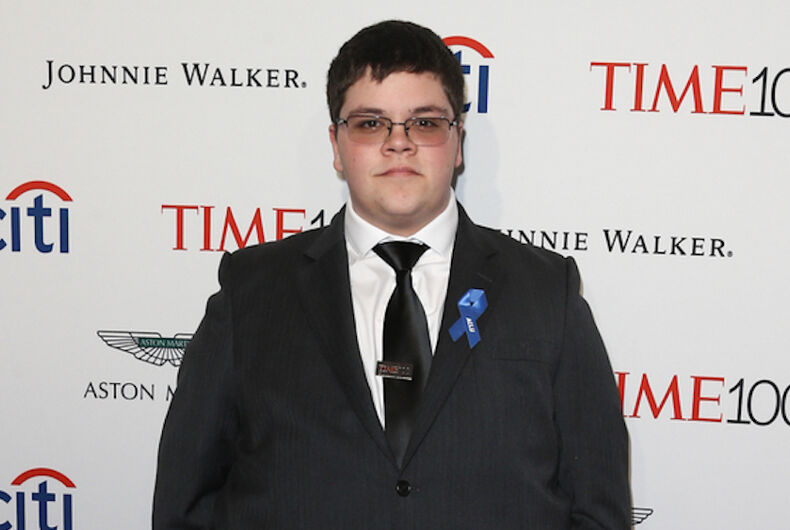 The U.S. Supreme Court issued a big win for transgender rights today by declining to take up a critical Virginia bathroom case that had already been won in the lower courts.

In 2018, a federal district court ruled in favor of Gavin Grimm, a transgender man who sued Virginia’s Gloucester County School District in 2016 when he was told he couldn’t use the boys’ bathrooms in high school.

Related: Biden declares “Pride is back at the White House” after designating Pulse a national monument

Today is a good day to reread Judge Davis's decision from 2017 when Gavin's case was remanded back to the Fourth Circuit.https://t.co/EmWZVDvIQP pic.twitter.com/jtaFl9v1Ol

Grimm started using the boys’ restroom when he was a sophomore at Gloucester High School after he got permission from the principal. He used the boys’ restroom for several months without incident, but then some adults complained.

But then the Trump Administration rescinded the Obama Administration’s interpretation of Title IX, so the Supreme Court said it wouldn’t hear the case anymore and the school board tried to get Grimm’s claim dismissed. The Biden Administration has since reversed the Title IX interpretation again, taking the stance that it does in fact protect sexual orientation and gender identity.

After its defeat in the Virginia courts, in The Gloucester School Board lost again in a decision by the 4th U.S. Circuit Court of Appeals, and now, with the Supreme Court’s decision not to weigh in, Grimm’s victory stands.

Justices Samuel Alito and Clarence Thomas were the two who voted in favor of hearing the case.

BREAKING: The Supreme Court is not challenging Gavin Grimm’s victory in lower courts, in his lawsuit over the right to use the restroom in his school.

This is the third time in recent years that SCOTUS has allowed appeals court decisions in support of trans students to remain.

Grimm’s unending determination and courage have brought him national renown in the fight for transgender rights. In 2017, the now 22-year-old was named one of Time Magazine’s 100 Most Influential People.

“I am glad that my years-long fight to have my school see me for who I am is over,” Grimm said in a statement released today by the ACLU after the Supreme Court announced its decision not to hear the case.

“Being forced to use the nurse’s room, a private bathroom, and the girl’s room was humiliating for me, and having to go to out-of-the-way bathrooms severely interfered with my education. Trans youth deserve to use the bathroom in peace without being humiliated and stigmatized by their own school boards and elected officials.”

Josh Block, senior staff attorney with the American Civil Liberties Union LGBTQ & HIV Project, added: “This is the third time in recent years that the Supreme Court has allowed appeals court decisions in support of transgender students to stand. This is an incredible victory for Gavin and for transgender students around the country. Our work is not yet done, and the ACLU is continuing to fight against anti-trans laws targeting trans youth in states around the country.”