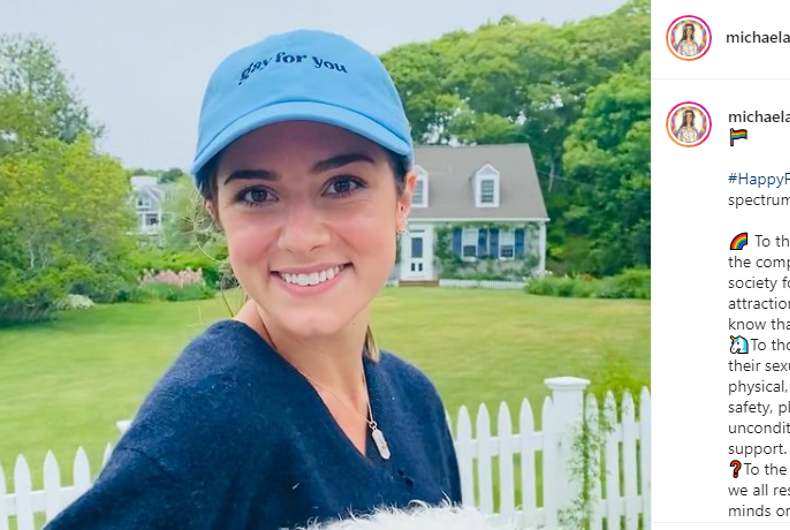 Michaela Kennedy-Cuomo, the daughter of New York Gov. Andrew Cuomo (D) and his former partner Kerry Kennedy, has come out.

In an Instagram post, Kennedy-Cuomo attached two photos of her wearing a “gay for you” baseball cap, and wrote in the caption after her username that she “…is queer!”

The 23-year-old is the youngest of three daughters born to Cuomo and Kennedy, who were married between 1990 and 2005. Kennedy-Cuomo is the granddaughter of former Attorney General Robert F. Kennedy and Ethel Kennedy, as well as former New York Gov. Mario Cuomo (D).

“To those who have yet to claim their sexual identity due to fear of physical, psychological, or financial safety, please know that you are unconditionally worthy of love and support. To the questioning folks, know that we all reserve the right to change our minds or evolve at anytime,” she said.

She said in a message to allies, “Being pro gay marriage is not enough to assure queer folks that we will not be ostracized for our sexuality.”

She added, “If #bi weren’t censored, maybe I could have accessed the information and tools that as a bisexual person I would need to protect myself from increased rates of sexual victimization, homelessness, hunger, unemployment, hate crimes, and mental health challenges.”

Still though, she took the moment to celebrate her public coming out.

“Today, I stand in my queer identity with pride, and in memory of those who came before me,” she said. “I stand indebted to the activists who fought for my right to love and happiness… I stand with a helping hand outreached to those finding their way from under socially constructed boxes to emerge from the closet. I’m standing with you.”

Her first photo featured the Pride and pansexual flags in the background, and in the second she beams a smile for a selfie.

Both Kennedy and Cuomo have been longtime LGBTQ advocates. Kennedy supported LGBTQ rights around the world as the President of the Robert F. Kennedy Human Rights Center, and just last year, stripped J.K. Rowling of a humanitarian award from the organization due to her anti-trans rhetoric.

Kennedy-Cuomo is a graduate of Brown University. She previously celebrated Bisexual Visibility Day and Pride in social media posts, having attending Pride march processions with her father for years.

“I welcome Michaela to the LGBT family,” Allen Roskoff, the President of the Jim Owles LGBTQ Democratic Club in New York City, said in a statement.

“Michaela made a beautiful statement. Hopefully this will lead to many years of activism from Michaela as we move forward.”